All about modern commercial stompbox circuits from Electro Harmonix over MXR, Boss and Ibanez into the nineties.
Post Reply
177 posts

Well, as a lurker here for years, I hope I don't get blasted.

Did the Galaxie mod today as I've been screwing with EVERY BD mod and came to the conclusion i HATE the pedal. This mod is truly something different from all the other BD mods out there. I pulled the schematic because I want to fully understand what is happening. That crappy diode to ground crappy-clipping is gone, and smooth. Gain is 1/3 what the stock is (like you'll ever need that much?), and actually sounds bluesy. A bit too tight bass to my ears, but reminds me of a 2x10 cab. I prefer looser bass, so I may screw with fattening that up a touch-- like a 2x12 or so.

Overall, this turns the BD2 into an amp-simulated drive, like a good preamp. The transistors (all FETs? Gotta look) are sparkling and clean. The pedal is more of a dirty boost that really sings. "Splatty decay" is gone, for real. Every other mod I've tried that "splat" is minimized at best.

Oh, and I put a hot green LED for indicator in there--- can I change the resistor to make it super bright since I switched other resistors?

Well done on the mod. I hope people actually hear about this one!

The only mod I've made to my Blues Driver is to replace the original Red indicator Led with a Blue one, other than that mine's all stock standard, for me, I find that the Boss BD2 Blues Driver is a bit like the Ibanez TS9 Tube Screamer, although the circuits are completely different, the Blues Driver doesn't have the midrangey-ness of the Tube Screamer, I tried the British Blues sound settings as illustrated in the Blues Driver manual and found that I really like it, honestly to my ears I can't for the life of me hear the splatty note-decay that some say is evident in the Blues Driver sound, maybe I just happen to have one that doesn't suffer from that issue...I don't know......

I might do the Galaxie mod to my BD-2. I liked what I've heatd on youtube and I agree that if you really want to change the pedal you've got to change (at least) the values of the components. Just upgrade components might reduce noise issues (GE-7 is a great example) or give some small improvements but don't change the sound. When I read Analogman statement: "This BD-2 mod does not drastically change the circuit, but replaces many cheap, poor sounding components that Boss used. This is similar to what the high-end home audio guys routinely do when they buy a piece of equipment - they spend a few hundred dollars putting in the EXPENSIVE capacitors which lets the true sound come through. We are also changing circuit values in several places to make the tone control more useable and less shrill high end" I started to think that his mod had a lot of snake oil added... I know a bunch of high-end home audio guys and they don't change caps for sure because their equipments already have excellent quality caps. But high-end audio is flooded with snake oil, being easy to find cables that retail over €5.000 and are just two wires and lot of engineering nonsense.
Top

hey i know this was a while back, but i wanted to try this mod out...

one question tho. is this a typo? D6 does not look like it is even close to the clipping diodes. Did you mean D7?


new_anuzzerone wrote: D6, D8, D9, D10: 3mm red LEDs (I like water clear high brightness) These are clipping diodes. LEDs make the pedal fatter, tighter and more compressed. I also find they add some dynamics to the pedal. They also clip much less than a standard diode so more headroom!

JRM wrote:I might do the Galaxie mod to my BD-2. I liked what I've heatd on youtube and I agree that if you really want to change the pedal you've got to change (at least) the values of the components. Just upgrade components might reduce noise issues (GE-7 is a great example) or give some small improvements but don't change the sound.

There have been tests done on the negligible effect of distortion from capacitors or resistors, and how again, with a device intended to create clipping, that hearing those effects is what I refer to as being like seeing single snowflakes in a blizzard. Maybe you can catch one here or there, but so what?

I honestly don't know what would actually need "upgrading" in the BD-2 with just component swaps that are part-for-part the same values. Boss went with very good jFETs for it. The op amp stage is simply a post-volume mild bass boost. It doesn't have a wacked out Q or it would stick out like a sore thumb. For that reason alone, what is the need to replace the op amp? General purpose for this application is okay.

I can also honestly say that I've used all sorts of general purpose components in the BD-2 and haven't heard any performance differences. I've installed the Galaxie Mod using just the original types of Boss caps, or similar mylar types, and have also used ceramics similar to what Boss used, or have used those little multilayer jobs without issues. I've A/B'ed them with cheap/upgraded/mixed and hear no audible differences.

The BD-2 has a mostly crammed up PCB. I think it makes more sense to use components that will fit without problems. The box caps or metal film types are good simply because they have 5mm spacing that allows them to drop right in. But that said, there are cheaper alternatives that usually have 5mm spacing. The BD-2 also uses 1/8-watt resistors. There's no point in replacing them with 1/4-watt (unless that's all you have), since a chain is only as strong as its weakest link. You'd have to install them like they are done in a Tube Screamer, which means there's the possibility for something to short out or make contact where it shouldn't.

There's also a pair of ribbon cables in the BD-2 that I frequently see that someone has damaged. I think it most commonly happens when they are trying to sub out the op amp, or shotgun out all the electrolytic caps, because most of them are packed in that end of the PCB.

If someone wants to replace parts just for grins, I don't have a problem with that. Some people find it to be a good way to pass the time, I guess. I'd rather just focus on changing things that are going to have what is (hopefully) a positive AUDIBLE impact, and do no more or less.
Top

I modified my Blues Driver so it could be used as a boost/overdrive/distortion for both bass and guitar. Here's my list of changes.

Experiment with the diodes, they don't necessarily need to be exactly what I put in mine, they just need to clip asymmetrically. I probably will use a different diode configuration for each one I modify.
Top

Could someone show me how to do the Phat mod switch from the keeley mod with a schematic ? Can't find one on the internet.

aab0mb wrote: ↑24 Oct 2013, 17:23The od2 has the clipping in the normal section within the feedback loop. More of an overdrive sound that's compressed instead of the clippers to ground in between stages like the bd2. So! Remove diodes to ground and tack them in either feedback loop. I did the first one and used the second stage as makeup gain.

Now let me tell you.... This. Thing. SUNG! There's a LOT of gain to play with so it can get a little over the top but all in all the splat is basically gone. Feedback loop clippers people. Makes it a different pedal, I'll admit, but it retains a LOT of the full range clarity that it's known for. The mod tames the high end a bit and smooths the splat. bottom line. I really hope someone tries this. It's probably one of the most drastic and pleasing mods i've done to ANY pedal and it's relatively easy.

Note: easiest thing to do is use the little 100pf cap in the feedback loop as your tack on point for the diodes. One could make a mini board module to wire in diodes +cap if they chose. Whatever works for neatness as it's kind of a hack to the circuit. Nondestructive however which makes it TOTALLY worth it.

reviving a zombie thread, I came across this post hanging around, and found it very very interesting.

I think that just a couple of diodes across C25 would do the job, maybe leaving D7...D10 where they are (in analogy with OD3 schem, where there are 2 diodes (D9, D10) on the input of the discrete opamp that has the clipping on the feedback loop, so the config would be almost the same).

I have to try.
Top

Hmm, that does sound interesting. Might also be interesting putting LEDs in the FB loop and leaving small signal diodes or schottkys to ground, or vice versa, to set the order of clipping.
Top

floris wrote:This is what I have stored as being "Keeley Boss BD-2 mods":

This is what I was looking for that mentions all the caps (it was C35 &C36 missing, which are the Box Film capacitors at .047uf), and adds up with what the kit has (minus all diodes, but taking that info from the other post this should be everything) Thank You!

Can someone explain the second step with the D7-10 diodes.

Can someone explain the second step with the D7-10 diodes. 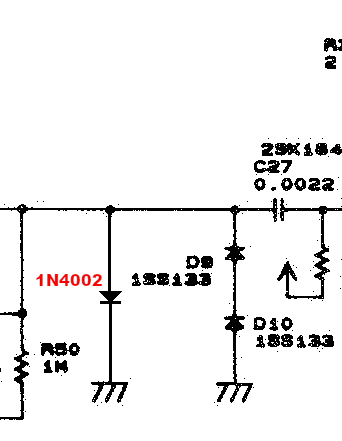 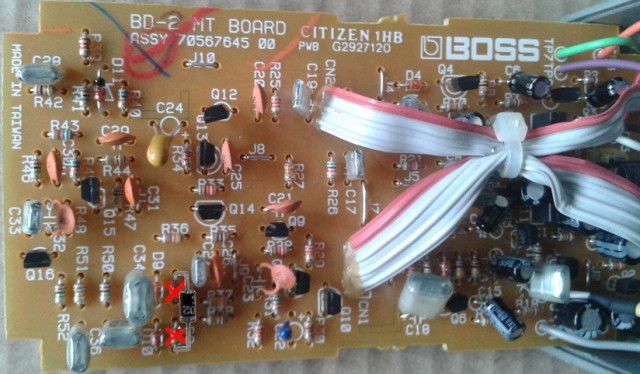 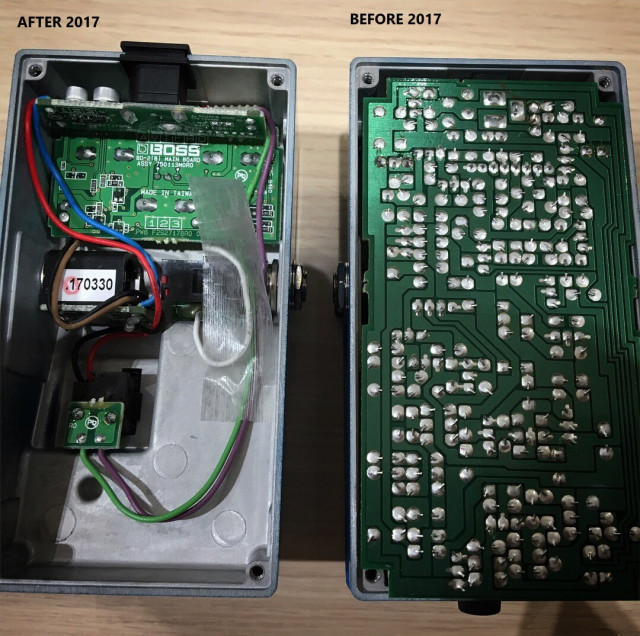 
It doesn't matter which of the D7+D8 or D9+D10 pairs you replace, as long as you keep the polarity right. I chose the pair which seemed further away from other components, thus easier to desolder.

For the tone mod I would use a SP3T on-off-on switch to add a 22n or a 100n capacitor in parallel to C100. This way I'd be able to switch from original seting in the middle position of the switch to 32n or 110n. Given the tolerances of the ears and capacitors, the exact values are not that important. 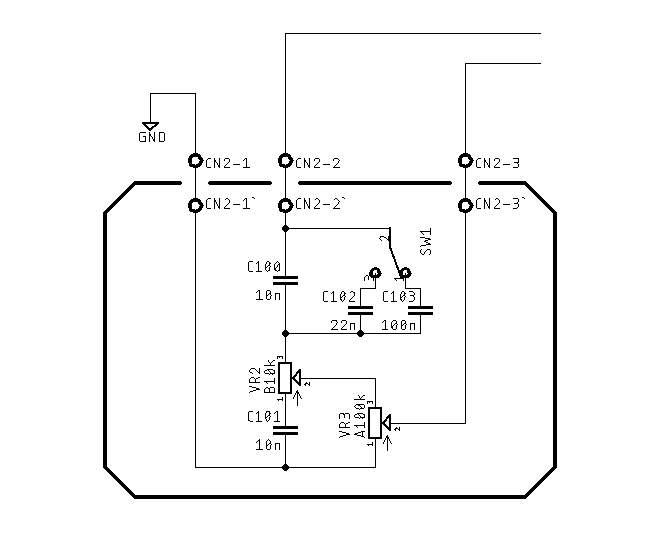 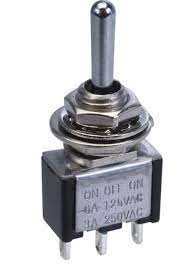 So I’m still confused from what has been said by Keeley. Is C100 supposed to be completely removed and it’s just either the .033 or .068 on a switch?

BUT, as with any mod, use your ears and common-sense. If it's too bassy, decrease the capacitor ¯\_(ツ)_/¯.
Or, if you need/like only one capacitor option, discard the others - just replace C100 with whatever value you like.
Top

I'm currently doing some maintenance work on my Boss BD-2 Blues Driver, just swapping-out the old in/out sockets for some new ones, and giving it a general clean-out.
Genius is not all about 99% perspiration, and 1% inspiration - sometimes the solution is staring you right in the face.-Frequencycentral.
Top

Hey, Doctor, I recently replaced the switch on mine. Easy-peasy. These pedals are not only well-built, they are easy to maintain.
Top
Post Reply
177 posts