All about modern commercial stompbox circuits from Electro Harmonix over MXR, Boss and Ibanez into the nineties.
Post Reply
36 posts

I really like the rockman sound. This sounds like a nice build idea. Your description sounds a lot like the Mockman actually.
I have built the mockman and i say it plays nicer with single coils than the Sustainer.
This circuit probably will too. Strat + Sustainer = ear fatigue in a very short time. Even with all compressors up and all trebles down. I use the Mockman for gigs and rehearsals. The The Distortion/Sustainer is far too fragile (broken plastic case when I found it 15 years ago) to leave my home musical environs.

Thanks for your reply Darth.

It seems the schematics are gone, only the thumbnails.

Could someone repost please? or were the schems removed upon request?
Top

Not sure what happened to the images but here they are again.
I've attempted a couple of times to trace out the Sustainor but always seem to give up. Its just that complex of a circuit. It sounds so much better than these stripped down headphone amps. 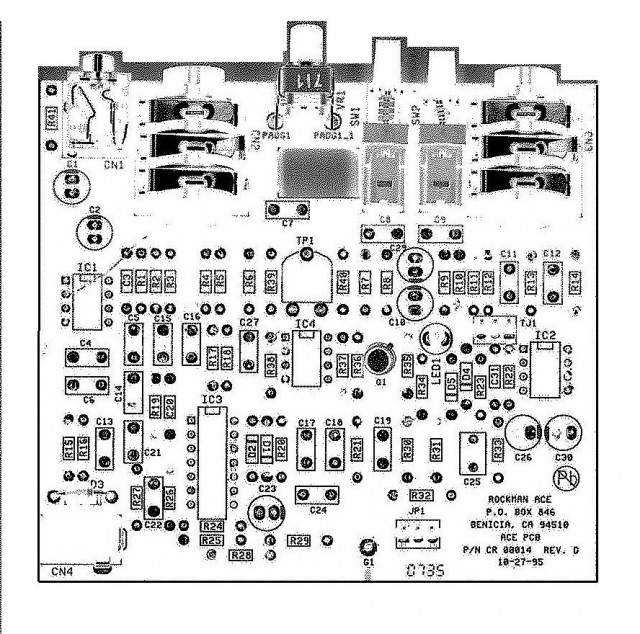 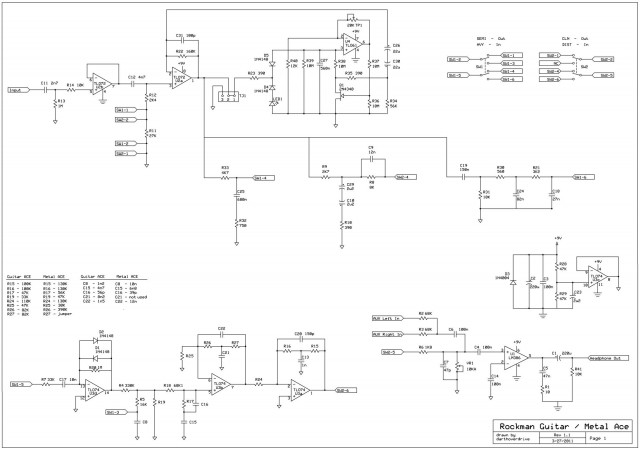 This is a schematic of the Sustainor I found a whle ago on the net:
http://www.4shared.com/zip/vuTn0kWO/roc ... ainor.html

Quite complex circuitry, though the main idea (compression -> distortion -> cab sim) was already found in the headphones amps.
Top

Plus there are the Nobels schematics and their knock off products of the X100 and XPR.
Top

Thanks to the darthoverdrive for the trace. I used it to modify my guitar ace to sound more full and sparkly.

Comparison of modeled response (comparison because I may not have the original right anyway...) attached.
I'm very happy with how it turned out, very full bottom, with some sparkle. I was shooting for a Jensen 10" in response, but with minimal effort, so the 2.5kHz peak is a bit high-q for my taste, but it works. There is a bit of harshness with a high output tele bridge pickup, but I can make it work -- I have convinced myself it sounds very similar to speaker cone breakup. All around transformed the thing into something useful. I only use the 'dist' channel, no heavy, no clean. also, I DO NOT use the compressor section (pull Jumper TJ1). It is too invasive for my taste, so I will next turn to taming it a bit (or not, I'm happy with it as is).

edit: just some backstory, I did all of this because the first thing I did when I got the Rockman Guitar Ace was put it on clean (sounded really promising), then running some fuzz pedals into it --- big mistake. Upon looking at the old Soloist and X100 schematics I noticed it was common for one clean channel to bypass the "complex filter". Sounded like a herd of bees. I initially wanted to just re-route the clean into the eq section, but I thought it sounded a bit thin. Now I can have a semi-dirty amp sim that can take fuzz and overdrive pedals convincingly. Since I lowered the gain to be on the verge of clipping, it also responds to boost pedals well. I use an MXR 6-band to boost the mid bands and push the Guitar Ace into full distortion. Alternatively, I ran this setup without clipping diodes for a bit the other day, and it does well as a clean amp pushed hard with the original 1M feedback resistor R20. I imagine with R20 to 500k and no clipping diodes, it should be clean.

Oh and now I can run it into my full range stereo (some ls3/5 diy clones and subwoofers) and in a small room I get that tactile low frequency picking action you get from a half stack. I don't care what the EQ is, 4 12" speakers in close quarters has a 'feel' that goes low.
Top

What does R38 do??
I understand everything but R38
Top

Can someone reupload the sustainor, 4shared is broken
Top

CheapPedalCollector wrote: ↑07 Feb 2021, 22:10 Can someone reupload the sustainor, 4shared is broken

I have it and will upload it for you shortly.
Would you happen to know my question above as to what R38 is doing on the Ace compressor?
Top

This question came up on the other forum. Some photos of the pcb point to a possible later version of the board and/or there could be some tracing issues around the JFET on the schematic in this thread.
Top

I was studying darthoverdrive's Rockman ACE schematic and I ended up completely redrawing it to make it easier to read (hopefully). Here's my version. Hopefully it will help someone. Let me know if you find any issues with it.

JTEX wrote: ↑08 Jun 2021, 00:14 I was studying darthoverdrive's Rockman ACE schematic and I ended up completely redrawing it to make it easier to read (hopefully). Here's my version. Hopefully it will help someone. Let me know if you find any issues with it.

Wow! That is Amazing! Great work!

This question came up on the other forum. Some photos of the pcb point to a possible later version of the board and/or there could be some tracing issues around the JFET on the schematic in this thread.

This question came up on the other forum. Some photos of the pcb point to a possible later version of the board and/or there could be some tracing issues around the JFET on the schematic in this thread.

As you can see in this pic.
There are differences in Dunlop Guitar ACE and SR&D Guitar Ace.
Dunlop is on the left. it uses an extra opamp and a trim pot to allow a much higher range of FETs to be used on the compressor this comes at a price though. More noise.
The one on the right is SR&D Guitar Ace. Notice one less opamp and no trimpot. It appears to be using the same compressor from all the other headphone amps SR&D produced and appears at first glance to be the exactly the same as the soloist compressor in particular. 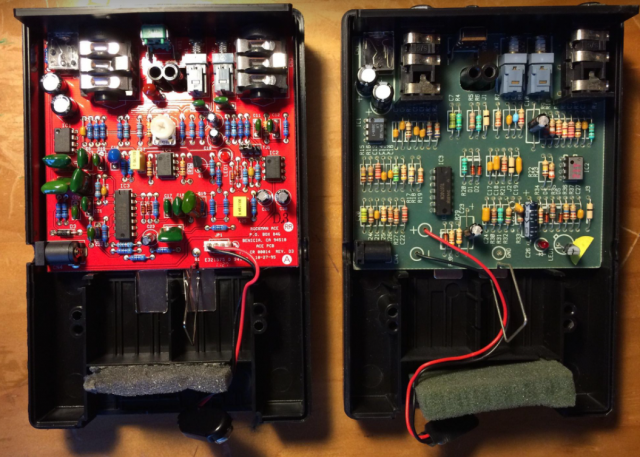 I guess that the schematic I redrew (see above) is of the Dunlop version. I figured that the extra, low power/noisy op amp would make the whole thing extra noisy. Clever trick, but not well implemented.
Top

Great work Carvindc125 and JTEX. I guess that answers the question.


Clever trick, but not well implemented.

Yes, it's not quite there. Kind of wrong as drawn (not the schematic but the original design).

The tell-tale sign for the Scholz-Rockman is the LED near the corner of the PCB.
Top

Did you take the picture? If so, could you elucidate the R38/R36 mystery once and for all? Thanks.
Top
Post Reply
36 posts