All about modern commercial stompbox circuits from Electro Harmonix over MXR, Boss and Ibanez into the nineties.
Post Reply
69 posts

Hi there, I seem to be having the same problem as described above. The phasing is working but it is very weak, the resonance has to be turned to full in order to hear the phasing. The weak phase mode can barely be heard. I have check the resistance of the three resistors mentioned above resistors and they appear to be fine. The voltages are getting through to the three main chips. Jet function (distortion). There is also a significant volume drop when the effect is turned on. Seems like the same problem you have mentioned. Appreciate any advice, thanks
Top

Let's start with this:

Have you ever had this AP-7 working correctly or did you get it in this condition?

I want to narrow down a few things.
Top

this is the little board, that directly soldered to the foot switch.
shortly i prepare a file which contains everything necessary for the realization of this pedal.
Will collect everything that I found online, I will try to mention all those who have contributed to the realization of the pedal in these years, if I forget someone does not be angry!

ok, the right orentation of the transistors is this 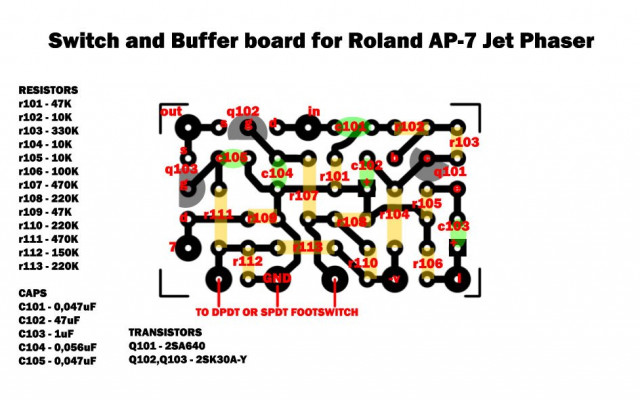 https://www.dropbox.com/s/oz2v0wvn327w7 ... Phaser.zip
this is the link for download the complete project.
there aren't no credits to anyone...sorry..too much time for this search

the two boards of this project are like the original Roland AP-7, not tested but other guys in the forum have built this beast and it works!!
enjoy!
ciao!
Top

cool! I think I found some of those on evilbay too
Skyline FX 2013
Top

I think a 3 pole will work too, the 4th pole could be used for leds.

deeno wrote:there aren't no credits to anyone...sorry..too much time for this search

the two boards of this project are like the original Roland AP-7, not tested but other guys in the forum have built this beast and it works!!

The two overlays and the redrawn "original" schematic that you collected are my work.

You state that "other guys in the forum have built this beast and it works!!"
A bit of information for you.....

I worked on this project for quite some time. I gathered all of the information I could find. I studied AP-7 gut shots to verify the schematics and the component values...I even went to great distances to gain additional info. I acquired JFET upper/lower resistances and LFO upper/lower voltage from an AP-7 owner in Tasmania!....yes Tasmania! The kind gentleman even physically verified all of the component values to my overlay.

The first build consisted of the AP-7 circuit with some modifications. I routed a smaller version of the board. I reworked the circuit so that you could have a separate foot switch to control the "Jet" function, added a separate tone control, depth control, and a phase stage switch.

When the build was finished...it worked...but it didn't sound like a Jet Phaser. It lacked that "over the top" sound where the jet phasing "grabs" the guitar signal and "shakes" it back and forth.

When the bias was "tuned" to get max phasing to match the frequency of AP-7 sound samples on the net..then there was an issue at the bottom of the sweep. If I adjusted the bias up away from the problem area...then it sounded like a "castrated" Jet Phaser.

I tried different Zeners, different types of JFETs (2SK30, 2N5457, 2N5458) matched the JFETs with R.G.s JFET matcher for VGS off, matched them again with the R.O.G. matcher for VP, as well as matching them to the AP-7 LFO for min/max resistance. No great change...same results.

I decided to try another build from scratch.

This time I dropped all of the mods and etched the main PC board (same as in your file) made by Bill Bergman. I also designed and built the buffer board based on the factory service notes and images collected.
I sourced the original transistors 2SC100GR, 2SC373, 2SA640, as well as N.O.S. UPC324C op amps.

Still no change! There was a problem at the bottom of the sweep and it just didn't have the same sound as the original!

I worked extensively with Mark Hammer both on and off the other site, as well as recruiting help from R.G.in threads started by me.

I also contacted Shawn from Loud Button who produces an AP-7 work alike, the Morphine Dream. We knocked around ideas over the course of a few days...still no fix.

It is my opinion that the AP-7 has never been properly "cloned." I have studied sound samples of builds, including the Morphine Dream, and they are not quite there!

There is some missing information. Maybe a particular HFE of the 2SC100GRs in the signal path? I don't know! All I know is that I tried everything 10 times and still failed at producing an adequate sounding Jet Phaser.

I purchased a non working AP-7 from seller in Australia, fixed it (I knew a little bit about the circuit!) and will use it for reference to take another stab at this build some time in the future.

I hope that something in this post is found to be useful for anyone attempting to make this effect a reality. Good Luck!
Top

I am going to build this and at every point hook it up to my scopes.

There are other Jfet based phasers that we know work right? I think so. I'm thinking I'll check out the similarities and differences in the phasing and bias parts first...see whats up.

After all, yeah its a tuff circuit, but shit, its only analogue. It's only a phaser with fuzz. It's ony a matter of time I say.

EDIT: I checked out the loudbutton site and the morphine dream : NOT bad, but I think I hear what you mean.
Skyline FX 2013
Top

chicago_mike wrote:I am going to build this and at every point hook it up to my scopes.

There are other Jfet based phasers that we know work right? I think so. I'm thinking I'll check out the similarities and differences in the phasing and bias parts first...see whats up.

After all, yeah its a tuff circuit, but shit, its only analogue. It's only a phaser with fuzz. It's ony a matter of time I say.

Mike...You were going to build this since 2008! What happened to you? I built it twice with no luck! In my post above, I didn't even go into a fraction of what I tried! I have referenced similar phaser builds, (Roland AP-2) worked extensively with the LFO trying to solve the issue at the bottom of the sweep, scoped the whole circuit, audio probed the whole circuit....the list goes on.

The time I spent trying to build an adequate sounding Jet phaser cannot be measured in hours or days....more like weeks! Many weeks! I was and am very determined.

I have never failed at a build until this one.

I do not consider this to be a very difficult circuit. Both of my builds have produced great phasing, but the "magic", over the top sound that makes the Jet Phaser so original was missing.

I am very capable of building working sound alike effects, check out the Mutron Flanger that I cloned: https://7ender1www.freestompboxes.org/vi ... 0&start=60

but something else is needed in this circuit. Some parameter has to be met that is not outlined in the service manual. Since I now own an AP-7...I'll get it eventually!

Edit: The Morphine Dream is close.....but it too lacks the "magic". Shawn was able to produce the circuit without the problem at the bottom of the sweep though.
Top

What happened to me was cruise ship gigs!

I have this summer off, so until Sept..I can work on the jetphaser. =)

I totally believe you in what you have tried and tried. I'm just damn determined to get this bitch running!

I'm very curious to know how to make this one.
A friend of mine has one, I could post pictures of his if it helps to have more of them for reference?

I etched the main and secon pcb and populated the little one.
I have been dealing with a troublesome arp synth for the last while. =(

But!! I do have parts coming in for the main pcb so I should be able to test it all pretty soon.

If
You want to post some piccies, please do!

Also, measure the overall size of the enclosure if you can! Gracias!!
Skyline FX 2013
Top

Hello, have you ever found out how to get that upper sounding magic to work?
If yes, what was it?
Thanks!
Top
Post Reply
69 posts