A forum devoted to mod, tips and suggestions for upgrading and rehousing your VERY CHEAP commercial stompbox to near boutique excellence.
Post Reply
5 posts • Page 1 of 1

I just went through my crybaby, and performed some of the typical mods I found on here and other sites. I'm having a few issues.

1. Heel down is a bit too harsh/loud.

2. I have a Mojo Vibe in chain after. When the vibe pedal is on and When wah is engaged, it causes distortion. Even if I'm not playing notes, there is a certain point in the range of the foot pedal/pot that causes distortion. When playing, it's distorted.

3. Not sure if it's my fuzz or the wah, but there is very little response from wah when germanium fuzz face is activated. just sounds like a treble-y version of the fuzz.


Here are the mods performed. Spent an entire day testing so my values may be a little off


Any suggestions would be greatly appreciated! 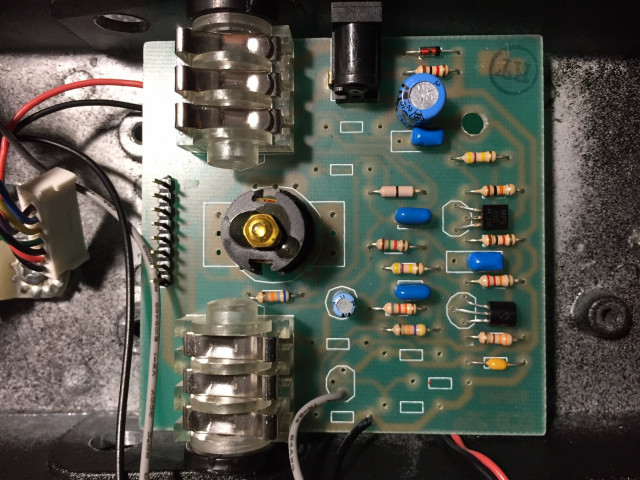 What transistors? MPSA's? They are really high gain, find some 2n2924 or 2n2925. I toyed around with these a while back and only did the 68k mod, left the others stock. You can also buy a 4uf non polarized. There are some decent inductors on ebay from Europe. Fuzz may need a input control of 100k-250k. They never really acted good together.
Top

My guess is your distortion is coming from here. Go back to 68k. You are lowering the input impedance and raising the gain and that may just be too much. Really hard to say though, that's the only thing that looks off to me.

Also, I do agree with Mozz that a 4uF does seem to be the just right value. 4.7uF and 3.3uF miss the mark IMO.
Top

Hey guys thanks for the responses

I seem to have sorted it out...

Cleaned the pot which solved my staitc/scratchy issues

Also replaced the stock trannies with a pair of 2N3904's. They sounds pretty good. Still punchy with out too much distortion

As far as the the wah not playing nice with my Ge fuzz, after doing some research, I found out this has been an issue for centuries. So short of adding an output buffer I think I have to live with it.
Top

Heres another noob question for you, how much "distortion" is normal for a wah on footdown?
Top
Post Reply
5 posts • Page 1 of 1