A forum devoted to mod, tips and suggestions for upgrading and rehousing your VERY CHEAP commercial stompbox to near boutique excellence.
Post Reply
32 posts

Silver,
Not a problem, plenty of scope here to do many configurations.
Maybe two gain controls and two o/p volume controls.
John
Top

There is a lot of hiss in my re-housed RR, any way to reduce that?
I did the unity gain mod.
Top

lonnie4 wrote:There is a lot of hiss in my re-housed RR, any way to reduce that?
I did the unity gain mod.

Well through reading John G's helpful posts above and trying a few things I think that this is because the R44 bypass mod reduces the gain before the modulation stage which seems to me to output a fixed amount of noise regardless of whether the R44 level and R26 treble mods are done. So what is happening when you bypass R44 is that you are reducing the signal level whilst the noise stays the same, hence signal to noise is no better or in fact worse than when all the gain is there boosting the signal level before the modulation. This is why John decided to "leave the R44 alone and instead add a o/p vol control at the output of IC5B and straight off to the bypass switch.(removed bluewire)".

I haven't got as far as rehousing (I want to make sure that the thing will be of use to me before investing too much time and money, there is something I like about it and some aspects, especially the low end loss that I dislike) but I have tried what John suggest in a slightly different way by simply cutting the blue wire (sounds like bomb disposal!) which is the signal output from the main board back to the I/O board and trying various value resistors in there to reduce signal level after the modulation stage. As far as I can tell this works better than the R44 bypass (which I had done with a jumper wire so could remove), you still have the high front end level coming in which is comparatively higher against the noise level but the whole lot is then reduced before output. Whilst I was at it I also added a capacitor to ground after the resistor as a simple low pass filter as it was all still a bit too toppy for me even with R26 removed.

The values that I have used are 47k for the resistor which takes the overall level actually lower than when the pedal is off but this can be compensated for with the drive control (further improving signal to noise) and 2.2nf for the capacitor which to my ears makes the level of treble about the same as when the unit is off and also reduces noise a little bit more - I have also removed R26 by the way to reduce treble boost (tricky!) as per John's suggestion. One other change I have made is to remove the clipping diodes LED1 and LED2 so that when I adjust the level with the drive control I don't get dirt - I don't want dirt from this box. Image attached (I hope), please note the temporary nature of this mod!

I am going to live with the beast for a while as see how it gets on, I would like to do something about the low end loss so if anyone has any ideas about that I would be grateful. 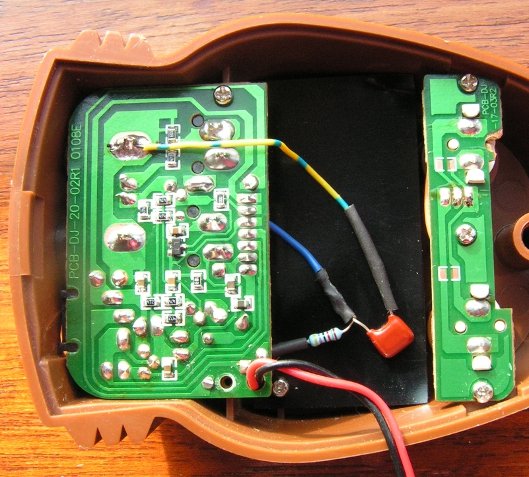 I discovered that by reducing the gain by the amount I did at the output end of things and having to compensate at the drive stage so much I was experiencing unwanted distortion from the unit with fairly powerful humbuckers. Consequently I have changed the resistor value to 18k which gives close to unity gain with the drive at zero and it's sounding sweet again now.
Top

For Steve who sent me a message but I can't find to reply to...

To keep it as simple as possible I suggest that you don't muck about with the board but cut the blue wire back to the output board and put a resistor in series with it to take the level down after the processing, this takes the noise down too. I ended up with 18k.

You can also take off some of the excess top at this point by adding a capcitor to ground after (i.e. on the output board side) of the resistor, again this helps with noise. I would suggest 4.7nf with the 18k resistor

No mucking about with a very delicate board, two components and a bit of heat shrink sleeve

This is what my photo above is showing

Still not happy with the lack of low end on mine though.
Top

On the first scheme... What is it that is different than the original wiring?

Can someone simplify this for me?..

Is this all you need to do?
download/file.php?id=9832&mode=view

All help is appriciated...
Top

am i supposed to put the other leg of the cap in the small solder hole below the tiny little R44 resistor?
Top

What happened to all the pics? I'm new to modding pedals. I just modded a Marshall TSL100, which was a pain, but this thing has some very small parts. More pics are required for us novices, please. I see that the resistor is 18k, but what about the other info. I can't search Mouser for just a 18k resistor, too many to choose. Same goes for the cap. I applaud you all for the work that you have done. It's just some of it sounds and looks like Greek for the novices.

I've been a long time lurker, but it is my first post. I assure you, I'm not trying to cause any trouble. Just trying to learn as much as I can.
Top

Just got a Rocky Road and want to re-house it. Some of the images that were posted to this thread seem to have disappeared. Any chance of re-posting or emailing them?

Can someone explain the mod better? There is a picture here, but I don't know where to solder the blue wire and the wire that comes out of the resistor. Can anyone help?
Top

BUMP. I've been searching all over for info on where to solder the blue wire to after adding the 18k resistor and 4.7nf capacitor, but all the links are dead.

There is one photo, but I can't see where the other end of the blue wire ends up. I read it needs to be connected to the ground, but I'm not sure where that is by looking at the pcbs.

Any info would be much appreciated.
Top

I don't think anyone is following this thread anymore. That's too bad. I think a lot people are still wanting to mod or rehouse this little pedal. Maybe I'll IM a couple of the guys.

Edit: I found a thread on the TDPRI forum. Here is what he said:

"The only place you solder onto the board is where to solder the cap to ground. Everything else is soldered in the middle of the blue wire, so there's little danger of overheating anything."

You just cut the blue wire in the middle, and add the resistor and cap in series. The resistor is soldered back to the blue wire! Now, to order some parts!
Top
Post Reply
32 posts