A forum devoted to mod, tips and suggestions for upgrading and rehousing your VERY CHEAP commercial stompbox to near boutique excellence.
Post Reply
26 posts

I just got done building the GT2, using a PCB from Small Bear (which is a great PCB), and the PCB is based off of Tonepads layout (http://www.tonepad.com/getFile.asp?id=112).

I added a 3PDT switch to add in the mid band EQ, as posted by Mozwell in this post.

I inserted the switch between IC4b pin (7) outout and the 1K resistor (going into Q1 base).

So I connected the last switch of the 3PDT to switch on the power to the mid band EQ.

Now in both the normal, and adding the mid band EQ the pedal sounds really good.

When I switch the 3PDT switch to either position, I get a pop. It did not do this pop until after I connected the power to be switched? Should I put a cap across the switch terminals to get rid of pop?

In normal mode, with controls maxed it is very noisy (which reading on line is happening a lot to this DIY pedal). I am going to try to wrap shielding around some of the wiring, but my question is do you connect one end to ground? Is there a article about properly shielding wiring?

due to the high gain and large amount of off-board wiring, it is going to be noisy and probably more so than a real one which are known to have the same issue. when I built the last one I did, I used higher quality op amps and rotary switches. the only wiring I was really able to shield effectively were the in/out wires and I kept my leads to the switches as short as possible and about all that did was keep it from oscillating at its highest gain settings. there was still a ton of noise.
Top

Not exactly a mod. I made tonepad's GT-2 and I don't want to wire all those switches, so I made a board:
Is there any way I can resize the pictures? mozwell wrote:Found this mid band eq for GT2 on my travels.
Modified GT2 equalizer with midband.png
Hope this helps.

mecmast wrote:Hi, i am new to schematics. May be this is stupid question but is there an IC or Opamp used in this schem? I couldnt figure out the triangles shown with "X4" and "X5". What are they?


Heya, guys.. I would like to bump this thread slightly because I am in need of some clarification, regarding the same issue mecmast already mentioned..
If I understand correctly, the X4 is the is the B side (IC4b if you will) of the op amp. What's the X5? Is it another op amp that needs to be added for the
mid band, and if so, shouldn't there be another 4-pin part? Is it a different IC with just 4 pins?

Any help would be greatly appreciated.
Top

Decrease the gain a lot to work as a clean fender channel, without any drive, but with EQs and boogie table frequencies
Top

Yes, each triangle is one op amp unit, and we usually use dual op amps in one package, like the TL072. There are also quad packages like TL074. This layout uses three dual op amps and it's usually what you'll find for a DIY GT-2: 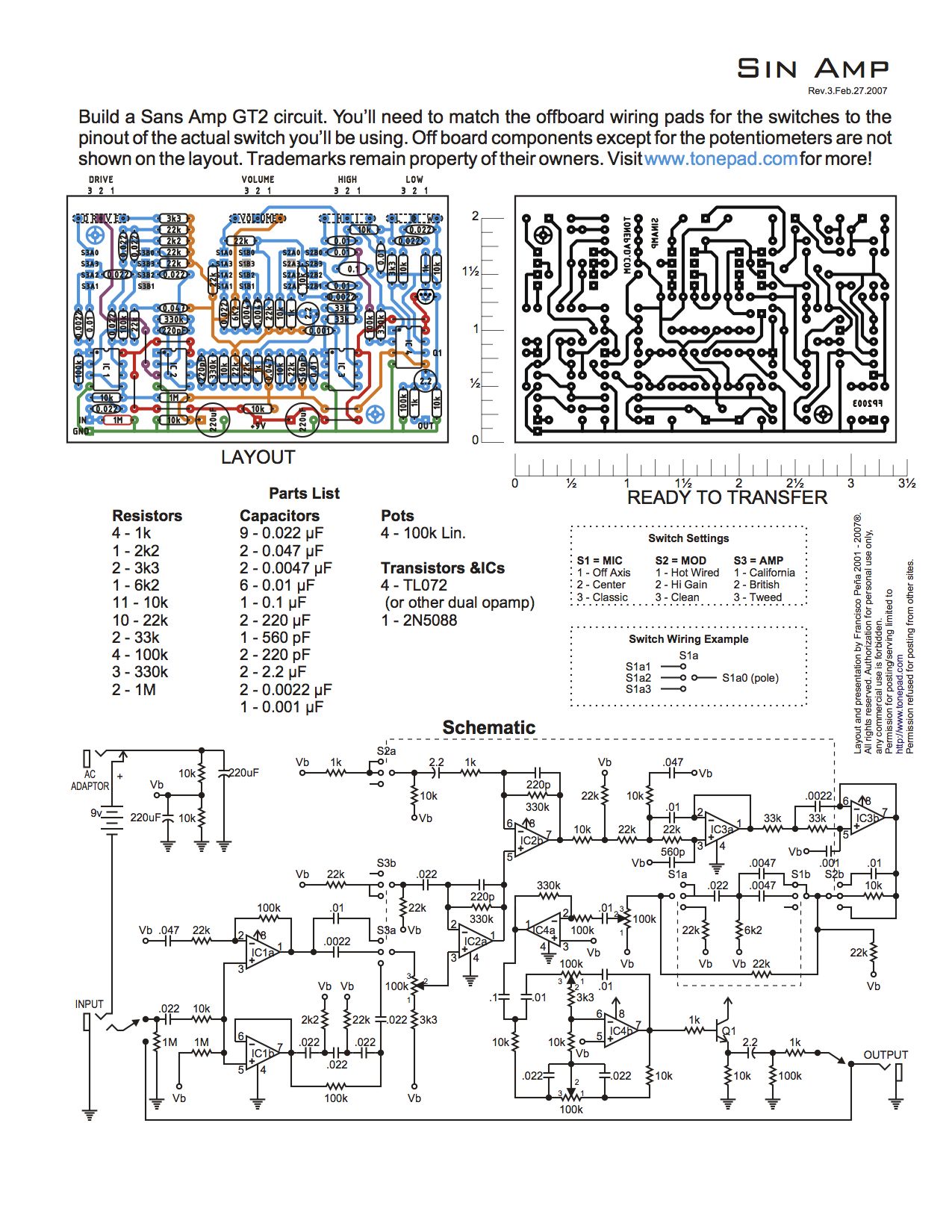 Regarding the proposed modified tone control, that one requires an extra op amp and adding it is up to you. If it's a "mod" to an assembled board you'd probably bypass the original tone section and add a daughter board with a dual op amp and the passives.
Alternatively you could go with this kind of combined 3-band Baxandall and keep the total op amp count at 6 but I doubt it would be viable to implement as a mod, you're better off rebuilding the tone stack to your needs, or the whole circuit for that matter. 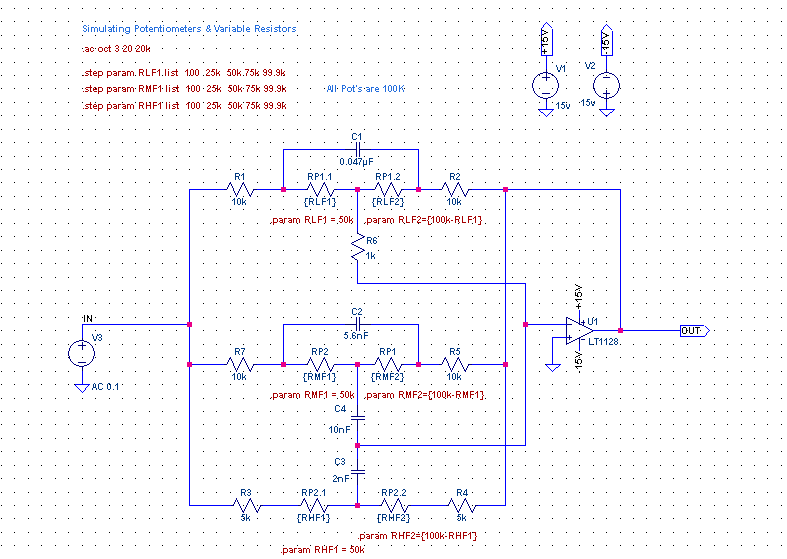 Later edit: I wanted to read the latest post but ended up replying to the last one on the previous page some 7 years late

So about less gain on the Tweed channel without affecting the others: unfortunately IC1b (in reference to the Sin Amp schematic above) is already at unity gain plus there's some attenuation afterwards in the pre-shaping filter. One option is to add a divider including the 100K resistor in that filter, say a 100K trim to Vb. Or just turn the gain down when you switch to that mode. Make sure switch 2 (MOD) is set to Clean. If the minimum gain setting is still distorting, lower the 3.3K attached to the gain pot, down to zero if needed.
Ignorance more frequently begets confidence than does knowledge. (Charles Darwin)
Top
Post Reply
26 posts