A forum devoted to mod, tips and suggestions for upgrading and rehousing your VERY CHEAP commercial stompbox to near boutique excellence.
Post Reply
136 posts

Bought it and wasn't really excited with its tone. I really don't understand what goes where in a pedal, but I do ok with a soldering iron, so any ideas for little mods (with easy enough instructions

Thanks in advance for the help

The fuzz alone is over compressed and underfined. The octavia is very soft, it doesn't have that high end "ring", again overcompressed, and - different from every other 'good' octavia I've tried - the octave thing seems to go away when you roll back the guitar volume.

Yeah, it pretty much sucks

"Hey man, you are lucky - you have saved more than 100 bucks to find this out. It could have been worse if you would have bought a Fulltone Ultimate Octave or a vintage Foxx Tone Machine. They use the same circuit."
"I've noticed there's an inverse relationship between cost of gear and talent. If you need the most expensive gear to get decent tones, then you suck as a player."
Top

Actually I've had the Fulltone UO and while it isn't my favorite type of octavia, I do like the tycobrahe thing better, but it sounds WAY better then the Joyo. If I could get close to the Fulltone with it I'd be pretty happy, and it was really what I was hoping for, but it really didn't deliver.
Top

Consider me another dissatisfied customer. I'm no fuzz expert but this thing is horrible. It's too cheap to bother selling so I would like to get it to sound decent.
Top

Tito83 wrote:The fuzz alone is over compressed and underfined. The octavia is very soft

I found the same. The trannies are 2N5172, some of the caps are different values, all the pots are 100K, the octave switch uses both sides of a DPDT switch, that's just a quick look. Might trace it out later if I get the urge. But the 2nd reason I bought it is, it has all the correct holes for something I want to build, a nice strong case, 2 footswitches, 2 jacks, a decent battery snap, a battery compartment cover and even a 9V batt, which is pretty good for $40 shipped to Australia.
Top

I traced the circuit, found that two of the 10uF coupling caps have their polarity wrong. It's also wrong on the silkscreen, that is, compared to the GGG schem and the Foxx Tone Machine schem by gaussmarkov. I pulled those caps out, turned them around, and soldered them back in. Now have a passable fuzz with some sort of synthy component in it. I'm not much into fuzz but this is a definite improvement compared to the mud I was hearing before. I then jumpered the octave switch terminals to see if I can get some octave...YES!!!....we have some cool strong octave happening! Octave in spades...

These 2 caps are marked as C9 and C15 on the Joyo PCB. C9 is immediately below the top left hand pot (fuzz) in the gutshot in post 1. C15 is below the mid-cut switch and off to the right. These caps correspond to C7 and C12 on the ggg schematic.

Actually thats not quite right, the Joyo resistor is indeed 100K, not 51K. So if you swap the positions of the 47nF and 100nF caps you end up with the Foxx Tone Machine schematic, except for the pot values and the switchable 1n/33n caps for the "mid cut". I swapped the 47n/100n caps, (the 47n goes in the left position and the 100n on the right) it improves the tone and makes the tone control more user friendly. I put in a 4n7 to replace the 1n on the mid cut switch. I think the circuit is working how it should now, going from youtube demos. 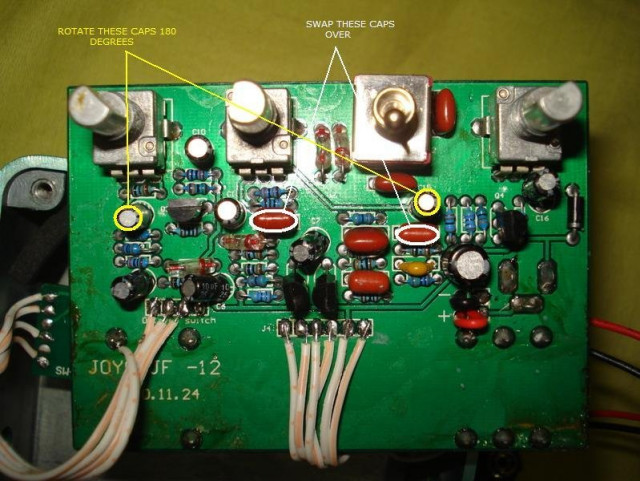 Thanks a lot for the research and great post Ian444, you actually prompted me to register here.

I actually don't mind the sound I'm getting out of mine except for the octave up function. Maybe cause I'm playing stoner rock with it and don't mind it a bit thick muddy? I also don't mind my tone control as it is. Of course if it could sound even better that would be great. Is it still nice and thick and chunky? I love your reports of a synthy sound though

I have a lot to learn about building and modding pedals but I'm great with a soldering iron so this cheap pedal seems a great place to start.

I can follow your simple directions on changing the caps around and subbing in the 47n for the 1 but what about jumpering the octave switch part?

I take it from your first post that the dpdt switch isn't the right type for that application? Unless I'm just reading it wrong.
Top

All the switches are good, the other side of the DPDT is for the LED

When I jumpered the octave switch, that was because I removed all the stomp switch wiring while I was tracing the circuit, those wires break off really easy, just look at them wrong and they fall off. I knew that from another Joyo I have. So with no octave switch connected, I jumpered the connection on the PCB to make the octave turn on. All you need to do to make the pedal work correctly is what is shown in that picture, nothing else.

>Is it still nice and thick and chunky?

There is still plenty of distortion, sustain and grunge that's for sure, maybe more. To me it sounds a lot lot better. Probably the same basic sound but easier to hear the grunge and distortion. Like if you had a blanket over your speaker box and then took it off. Difficult to explain.

Turning the two 10uF electrolytic caps around will make the octave effect work. Swapping the other 2 caps was not such a dramatic change.

Be careful with the PCB, it is not real strong and is not built strong enough to handle more than 1 or 2 component replacements IME.
Top

I rotated the caps and it sounds a lot better! Now I think it's pretty usable. I didn't try the swap on those other two, because I don't have much practice with this mods, and it took me hours to remove the caps that need to be rotated lol! They seem hard to remove, so maybe I'll take to my tech to made this one. Would you care to describe what's the difference after the swap?

Again, thanks a lot!
Top

No worries Tito. Swapping the other 2 caps, the 47n and 100n, makes the circuit work properly as designed. One is in a feedback loop and the other is for the tone control. Both are important to make the circuit work correctly, especially the one in the feedback loop. You will not be disappointed when you swap them. The tone control works better (not as fierce either side of center), and overall better sound to my ears. I am keeping mine, I like it, the octave is strong, the distortion is good, and long sustain. Yes the caps are difficult to remove, its like the holes are small, and the wires were bent over and cut off, making it difficult to pull the component out. It is a difficult PCB to work on. The Joyo PCB's are not easy to work on, even if you have expensive equipment, you did well to rotate the 2 electrolytic caps

Here's a pic, a friend painted it for me, and the one on the right is a Joyo crunch distortion with Marshall Guv'nor tone controls sticking out the side. I did the tolex with some scraps left over. The crunch distortion needed no "corrections" at all, very nice straight out of the box.
Top

Hi all, I'm new to the forum and have been watching this post with some interest. I have a Joyo UO and decided to give this mod a go myself. I thought the pedal already sounded good, but this just adds much more clarity and octave. Thanks for the research on this one, Cheers.
Top

Apparently the polarity of those two 10mf coupling caps are reversed (on purpose?) on Fulltone's Ultimate Overdrive, and the Joyo appears to be an exact clone of that, not of the Foxx Tone Machine. Those 47n and 100n caps are also switched on the two. I'm going to wire my Joyo both ways and see what the diff is...

BTW, can anyone recommend a good place to put trimpots in that circuit to optimize the octave response and the fuzz decay? Thanks!
Top

drfried wrote:Apparently the polarity of those two 10mf coupling caps are reversed (on purpose?) on Fulltone's Ultimate Overdrive, and the Joyo appears to be an exact clone of that, not of the Foxx Tone Machine. Those 47n and 100n caps are also switched on the two.

Ahh well, that probably explains why Joyo did it that way, looks like they copied a bad schematic. I cannot find a Fulltone schem. ggg sell the Foxx version and I assume no complaints. Usually the positive leg of an electrolytic cap will be connected to a voltage more positive than its negative lead, as shown in the Foxx schem, C7 and C12 on the ggg schematic. Always nice to find the reason why, I have a feeling the people at Joyo know a lot more than what they let on. Their choice of parts is not just for cheapness, I think they are reasonably careful in sourcing parts that work well. Just my observations from 2 pedals I bought from them and traced the schem and scrutinized. But they did screw this one up, oh well you get that, and now we know why perhaps.
Top

Thanks Ian444! The reversing of the coupling caps totally makes this a useable octave pedal.

You are totally correct about the challenges of working on this board. In my case it appears that as part of the soldering process, the component seems to soldered on both sides of the board, making removing any componets a real pain in the a$$.

I am eager to do the tone cap switch but a simple component swap that should take about 5 min. turned into about half an hour! I already have a Fuzz Face as my main Fuzz pedal, and I just wanted this one to use for the "Octavia" part.
Top

So I just bought this pedal and found this forum through lots of searching. I rotated the caps but it didn't make that much of a difference. The octave sounds the same. Its like it just makes the tone more trebly and bitey. I will probably attempt the other swap today or tonight and see if that helps any.

BTW this is an awesome site! So glad I stumbled upon it.
Top

Hey guys just wanted to let you know that I ordered the JOYO JF-12 and performed the mod from this thread. I actually joined the forum because of it. This mod makes the pedal much richer and usable and is worth doing!

I have some tips for those who are new to modding, and anyone who does this mod and simply doesn't think about things like this:

1. It's a whole lot easier to re-solder these caps on the back side of the board once they are removed. They are not likely to ground out anywhere and it give you more room to work.

2. Tape the switch wires against the board and the switch so they are less likely to wiggle around. This way they wont break loose as easily.

3. Be sure to play through the pedal before re-housing the PCB.
Top
Post Reply
136 posts