A forum devoted to mod, tips and suggestions for upgrading and rehousing your VERY CHEAP commercial stompbox to near boutique excellence.
Post Reply
128 posts

Couple of questions regarding this one...

1) Will it give a Hendrix-y tone at all?

2) Since it's a Foxx Tone Machine clone, anyone tried adding the SWELL circuit as described here?
https://www.diystompboxes.com/smfforum/i ... ic=80966.0

I built an ultimate octave clone from a ready to populate pcb
used this pcb
http://shop.pedalparts.co.uk/FoxxTave/p ... 89291.aspx
layout & schematic is here
http://pedalparts.co.uk/docs/FoxxTave.pdf
I'm building the ultimate octave version .
the problem Is while it seems to work it is a very dark tone ,the tone knob seems to work in reverse though all 3 pots are same 100k ,but with it maxed (cclockwise) it is not overly bright & the fat/bright switch does nothing .
Volume & fuzz controls seems to work as they should, though volume maxed is no louder than bypassed & octave engaged does work .
checked all components for proper values & polarity of electrolytic caps & orientation of diodes & transistors .
reflowed all solder joints
When I originally tested the board i did not really take notice there was a problem so i wired it in the enclosure ,but i have removed it to do some debugging .
any suggestions ? diodes maybe
I've built a dozen or more pedals without much trouble ..this one bit me ....
Top

I did both mods. I think I will add a diode clipping selector switch next for a choice between batt41 and germanium diodes. I also was impatient so I ended up messing up and scratching the pcb track so I ended up having to point to point wire in the electrolytic caps. But it works and sounds tons better. I did change the electrolytic cap under the tone switch to a 10uf 67v from the stock one. It sounds a bit different. Happy modding all.
Top

I recently modded my VO. When I turn up the Fuzz level I hear a significant hiss sound when not playing. I don't remember hearing this hiss before the mod, but it could have been there. Is this normal or should the pedal be dead quiet thought the fuzz knob range? Is this common for fuzz pedals? The joyo is my first fuzz so I wasn't sure what to expect.

Otherwise this is now a killer pedal.
Top

I have the fuzz turned almost all the way down on mine most of the time this thing has loads of fuzz. Anything past 9 o'clock was tooooooo much for me.
Top

Most distortion/overdrive/fuzz will have hiss at higher levels unless you have a noise gate/suppressor. I would say if your turning up the fuzz you will almost always hear a hiss.
Top

When I ordered my Voodoo Octave it arrived with a broken switch, so I received another one, but the dealer didn't seem to care much about getting the faulty one back. So,
I ended up with 2 of them and after I found this great thread (which has been going on since 3,5 years btw.) I decided to fix the broken one and do the cap mods. First
came the "reversing the caps" mode. Since I now had 2 pedals, I patched them together so that I can A/B the differences. Well, no difference at all with the aforementioned mod. I even checked them with headphones very carefully...identical sound. Now when I did the "swap the caps" mod, that's where things clearly changed. Much more
low end than before and therefore also much louder. There are also other nuances that differ, regarding the tone of the Fuzz, but I cannot really describe them. Only
problem now, none of the LED's is working anymore

Does anyone have an idea why nothing changed with the 1st mod? And what could be wrong with the LED's?
Cheers
Top

Ducknose wrote:Only problem now, none of the LED's is working anymore

Does anyone have an idea why nothing changed with the 1st mod? And what could be wrong with the LED's?

LEDs are not just little lights - the acronym stands for Light Emitting Diode, and a diode is a component which allows electricity to flow only one way.

If you've turned something around and an LED is no longer working then I'd be inclined to assume that the potential is now on the wrong side of the LED, and is unable to flow through its one-way street.

With careful handling, and perhaps a pair of tweezers, I think you should be able to hold a second LED across the legs of the one that's not working. Does it light up? What happens when you turn it around?
Top

Ive done both the mods on the pedal, and it is a bit of a git to de-solder, add new solder then remove with braid and a large tip iron seems to work, tone is greatly improved, though I managed to destroy the midcut switch when putting the case back together, though this was easily replaced (after much swearing). I found this mod too, it boosts the volume on the pedal, Ive done it and it is LOUD! See what you think.

I really like the tone of this pedal, but hate the lack of volume and also the fact that it doesn't really clean up much(though this is partly because I can't get enough volume behind it to hear it). Is there a simple mod to increase volume and/or have ita bit less compressed? I mean the way that it rolls off the guitar's tone running in like a muff generally does. i prefer fuzzes like the FF where I can hear some of the character of the original pickup, if I want a pure synthy tone I crank the gain!
Top

Replace the germanium diodes with silicon diodes, or for a huge increase in volume, LEDs. Both modifications will increase the clean headroom as well. You won't be able to get it AS heavily compressed and congested sounding, but that may not be a bad thing.
Top

I really like the voodoo octave fuzz,I find if u set fuzz to 9ock tone @ 12ock mid cut on and volume to taste,roll back the volume on ur guitar and u will get a really good overdrive sound that's very clear just on that bluesy side u can actually hear ever note keep in mind I'm using a stratocaster with a Seymore Duncan rail in the bridge and using that p/u only amp set @ bass 1ock mid.,10 ock treble 12ock gain @ 9ock (60watts 12Ax7 pre-amp/solid state power section, running 12Ax7 through fx loop)and it sounds awesome, very articulate and when u use guitar volume to control ur fuzz,it can go from blues to rock very easily and the Oct is very noticeable w/these settings especially the D.A.E. and when u add a little distortion after u get a good synth lead on the E.B.G. strings
Top

I find alot of guitar players 4get to use the volume knob as part of their tone and just keep it wide open, u would be surprised to see how many different tones ur old distortion /fuzz /overdrive pedicab get just using ur volume. Try b4 u mod,u just might see u really haven't truly found the full potential of that pedal..playing for more than 30yrs.and numerous fx pedals and multi fx units, now I build boutique custom fx. (illyareid66@gmail.com )Rasta Drive, Rasta octa/fuzz and Rasta Wah.each pedal numbered only will make 5 of each (Germanium, Mosfet and Jfet)tones and 2oct (switchable )Full range sweep wah (heal to toe)very Throaty
Top

I just did the reversal/swap of the caps. Didn't improve the octave at all.

So I swapped out the silicon st60p diodes that these are now shipping with with matched germanium diodes in the octave section and went the extra step and swapped out the 4.7k collector and emitter resistors on the transistor just prior to the diodes with a matched pair also.

Now I'm getting a most excellent octave up effect throughout the neck with no tone control meddling or anything like that.

Edit: I'd also say it cleans up pretty well dialing the volume knob back on the guitar for a high gain fuzz, much better than say a Big Muff, or a Superfuzz. Not as good as say a lower gain fuzzface but pretty damn good I wouldn't have expected it. Also I have plenty of output volume, not a unity gain thing with the stock transistors.

Ducknose wrote:Only problem now, none of the LED's is working anymore

Does anyone have an idea why nothing changed with the 1st mod? And what could be wrong with the LED's?
Cheers

One of mine fried out. I'm guessing they're bottom of the barrel, cheap as it gets. I thought the same as you but they're just getting 9V off the main rail. Easy to replace and with better!
Top

I have one of the Joyo/Ammoon voodoo things and it came with a broken 3pdt and breakout board, the led on that side also appears to be broken. I think they sent me someone's return, they are sending a replacement, but it's a ways away according to the tracking info. Does anyone have a wiring diagram for the little pcb, I can't seem to trace it properly and it looks like wiring a new 3pdt + led is easier than finding this exact breakout board. It's the one on the right labeled True Bypass. Thanks
Top

I was just replacing the stomp switches for someone as a preventive measure. Hope this helps. Both switch boards are the same. No idea what the 51 ohm resistor is doing... Maybe it's used in some other design. 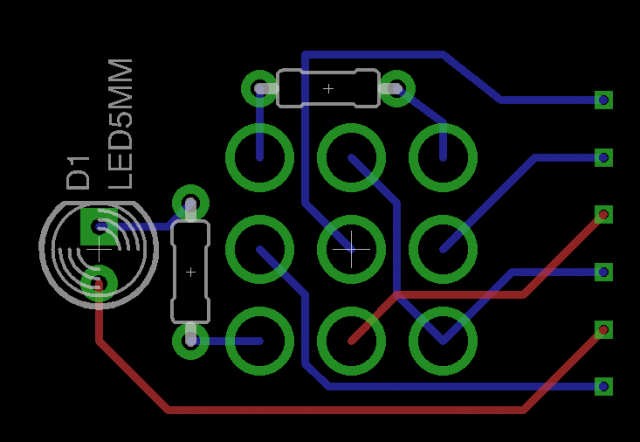 I was just replacing the stomp switches for someone as a preventive measure. Hope this helps. Both switch boards are the same. No idea what the 51 ohm resistor is doing... Maybe it's used in some other design.

Thanks for replying. Been busy and just saw your response. Thank you sir, really. Most of this type thing has a resistor for the LED, but in the original daughterboard I don't see a resistor. I'll try using this and let you know. Thanks again. Regards CFI
Top

OK, I think I see what my problem has been, maybe. Can anyone tell me, are these surface mounted resistors? This is a different Joyo pedal but it looks just like the one on the Voodoo (If I paid myself $.50 an hour I'd have been able to buy a few of these by now) So these are the two resistors in Max's diagram, right? Thanks 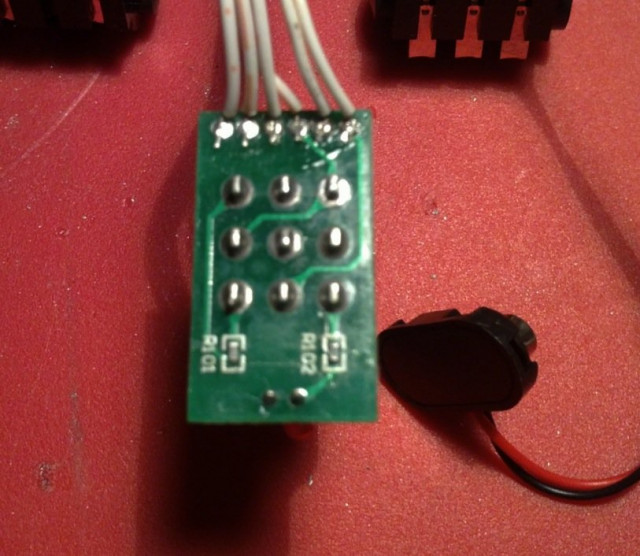 Screenshot from someone elses post on a Joyo pedal

I have a Voodoo Octave I plan on modding. While I'm working on it I was wondering if it would be possible to modify the tone control to use an expression pedal with it? It gives a nice swooshy sound when you turn it back and forth.
Top
Post Reply
128 posts