A forum devoted to mod, tips and suggestions for upgrading and rehousing your VERY CHEAP commercial stompbox to near boutique excellence.
Post Reply
131 posts

Another happy customer. I joined this board on the strength of the advice on this pedal. 1 hour of sweating and soldering and bingo!.mucho Octavia! Thanks!
Top

I have just purchased a Joyo Voodoo Octave, which I believe is the latest version of the ultimate octave. I would like to enhance the octave effect and make it more prominant.

I am a relative newbie to modding.

Would it be possible to get someone to mark up the original picture to indicate what needs to be done to make the octave effect more prominant.

Very much appreciated if possible.

You didn't read this whole thread, didn't you?

In the first page of this thread , ian444 described how to do this,

Yes I did read the post, however, the notations for the items to be removed are totally visible on photo so I just wanted clarification as I am a total newb to electronics etc. Away, I have marked up the pic if someone could confirm that what I have done is correct.

I thought I also saw somewhere that the Voodoo Octave version has had this item fixed as opposed to the ultimate octave version. Can anyone confirm as I would still like to get more octave sound out of the pedal than is currently available. 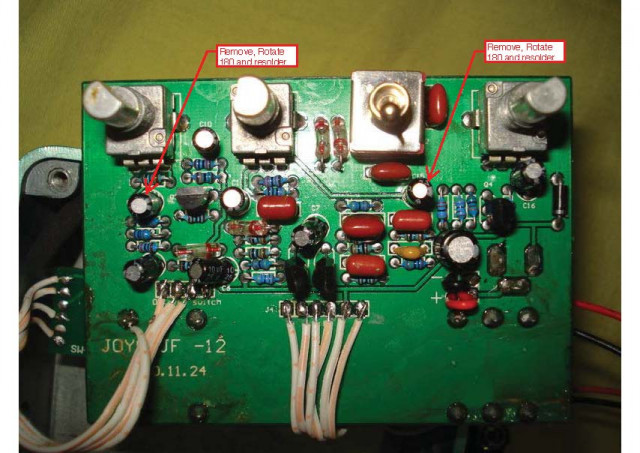 There are two other capacitors marked on ian444 pictures,changing these will bring you to original

FoxxTone Machine octave, some other users didn't find rotating the caps useful.(I didn't do that)

But, we are talking of different versions...,I have the 'old' ultimate octave'.

For analog octave up ,use the neck pickup with tone on zero,then you get what's possible

around the 12th,it's most noticable. Compare it to different youtube s of 'foxxtone machine'

to get an idea ,if yours sound close to the real thing.

Ok so I have changed the Caps around.

Bastard to get them out. My soldering iron has a sharp point but musnt get hot enough to melt solder etc propoerly. Should I be using a different point ?

also I notice I can get some radio station interferrance.....is that because I have screwed something up or is it just how things go ?

How does it sound now?

Is it out of the enclosure or do you get radio after you put it back inside?

Another possibility for interference is a bad cable.

How long did you wait before starting to solder,10 minutes should be

good if yours has no possibility to dial in the temperature.

Anyway their solder is no easy stuff.
Top

I am not sure if there is much difference. Could be some slight difference but it doesnt seem to be significant.

Everything was back in enclosure and all locked away as per delivery.

I will try a different cable and check things. So if things are working then it is nothing I have done wrong ?

Any other suggestions for radio stations.

I'm afraid I'm not being of much more help concerning the radio station.

Does your soldering look shiny? Or do they look a bit dull ,just compare to the other ones.

In the last case ,you could reflow the solder, and so repairing a cold solder join.
Top

New here, so sorry for any dumb questions. I'm not an electronics guy, but I am kind of hoping to get into it as a hobby, and I want to start with this pedal!

Now, this may be a stupid question, but what kind of transistors are on the circuit of this pedal? Could they be replaced with germanium trannies to make it sound like an octaved Supafuzz/Tonebender mkII? Cuz, that would be really really sweet.

I also plan on undertaking the previously mentioned cap mods.

Out of curiosity I started to replace the clipping diodes.
Well without any diodes that thing is loud as hell, surprisigly

But i had no diodes at home and it was weekend so I messed around with a Pot and a Cap instead in the hope to give that thing more Bass and there was Bass.
I wirden them in parallel to GND, so the Pot contol how much signal is send to GND and the cap sets the frequncy response. The bigger the cap the more Bass and less trebble you get which was exactly what I had in mind when doing this.
When I looked at the schematic it was obwious that I "accidently" direclty modded the tonestack.

Now I will look a bit closer to that tonestack and do a few simmulations or maybe replace it with a 2 Band James Tonestack to make the pedal more tweakable since I generally prefer tonestacks with more than just one pot.

bonefish wrote:Ok, I completed the mod and now the pedal will not power on! I guess that means I didn't complete the mod. Anyhow, the ribon cable came loose during the mod and I'm afraid I might not have reconnected properly. Could someone shoot me a pic detailing how those should be connected? Looking at it from the bottom, if you could include the bottom of the button/switch and the bottom of the board, that may be easiest. Thanks!

Same thing happened to me today. the power light comes on for the fuzz side. Nothing for the octaver side. I super glued the trace back into place and resoldered everything. Signal in bypass mode, yet nothing but a red light on the fuzz circuit. Any help?
Top

I dont see why everyone is not liking this pedal. I put this on my Twin Reverb and it kicks butt to me. I run a Biyang OTD100 Tube Distortion with it and it can shake the plates out of my neighbors cupboards and dollies off the neighbors wall. It has some serious Fuzz and I have another Fuzz to compare to that I won. I am betting a few people make this Pedal and some are not as talented as others.

If it is not broke dont fix it. Some cause more problems then they are trying to fix while modding.

Since they are so cheap it is a good starting point for mods but soldering without a temp readout is a crapshoot. Weller makes a good station with a SOLID holder and a digital readout that is 125 to 150 bucks in price, I bought 3 to 4 of those smaller smaller soildering irons that were 100 percent useless, either too small or not hot enough to do the job or rediculously big (online is a crappy place to buy tools). Also if someone learned to do the correct job on the Joyo Ultimate Octave that means I dont have to fix it. My ear is pretty solid when it comes to awesome tone
Top

I also wanted to know if anyone switched trannies to germanium, this thing has way too fuzz for me...any other ways to do this? Seems like if the fuzz knob is past 20% its too much.

Is it possible to isolate the ''octave'' circuit and make it independent? I mean by that: being able to use just the octave without the fuzz being activated?
Top

Hello, first post. I did the mod on the octave aspect of the pedal and it was great. I got bored and ambitious (total newbie) and decided to do the tone mod, swapping the two caps. Well, when I was pulling out c14, the little silver pad came out. Now I get a very, very weak signal when I engage the pedal. So weak I cant even tell if there is any fuzz going on. 95% volume drop. I am not sure what to do. I tried jumpering c14 with the two little resistors that are right above it, they look to be linked by a trace, but I get nothing. Any help would be appreciated.

This should help those, like me, that want a decent sound from their Joyo Ultimate/Voodoo Octave. I couldn't find any other place on the internet with this much information. After reading the older posts, I had to see the schematic. So thinking I could help, I came up with this:

This is a copy of the Fulltone Ultimate Octave found on the internet somewhere. I circled the components in question after scrutinizing the Foxx Tone Machine schematic. This should be the Joyo as described by Ian.

i need help with my pedal.
i switched the caps and turned them around back and forth and back and forth.
i liked my pedal in the stock version. so i put everything back together.
what a came up with now is a big HUM. the pedal didnt make any noise before.
the normal/mid cut switch doenst seem to make an effect now.
and the tone control also is pretty weak.
did i damage anything? any clues?

i turned around the caps on C9 and C15 and switched the C3 and C14. was that correct?
the C3 was the 47nf, correct? i got a little confused after 3 hours of soldering.

when i push the octave switch i get less hum. and the normal/mid cut switch is like... normal: a little more hum, mud cut: less hum

I know this thread goes back quite a long way but having just bought a Voodoo Octave I would suggest that you get to know it before assuming that it needs modding to make it usable. At first, I thought it was terrible but as the earlier contributor stated, you need to use it with the neck pickup AND with the tone backed off. My (high output) Tele neck pickup drives it beautifully - octaver and all, but it sounds terrible on the bridge. I'm not saying you shouldn't modify this pedal, just that you should be certain you need to. Mine is the Voodoo Octave and not the earlier Ultimate Octave which may be the difference.
Top

stevebar48 wrote:… having just bought a Voodoo Octave I would suggest that you get to know it before assuming that it needs modding to make it usable.

What a coincidence that you bumped this thread the same day I was looking for it. I have had this pedal for some months, and I have been meaning to investigate this further.

I agree that some of these earlier posts are a bit unhelpful - 2½ years later, we really don't know that Joyo are still shipping these pedals with the capacitors the wrong way around.

I believe that capacitors use a marker to indicate direction (a white stripe down the side?) and have their value marked on them. So IMO what would be really useful is an indication of where or which way that direction indicator should be, and what values should be where.

So, based on Ian444's previous instructions on the first page of this thread: 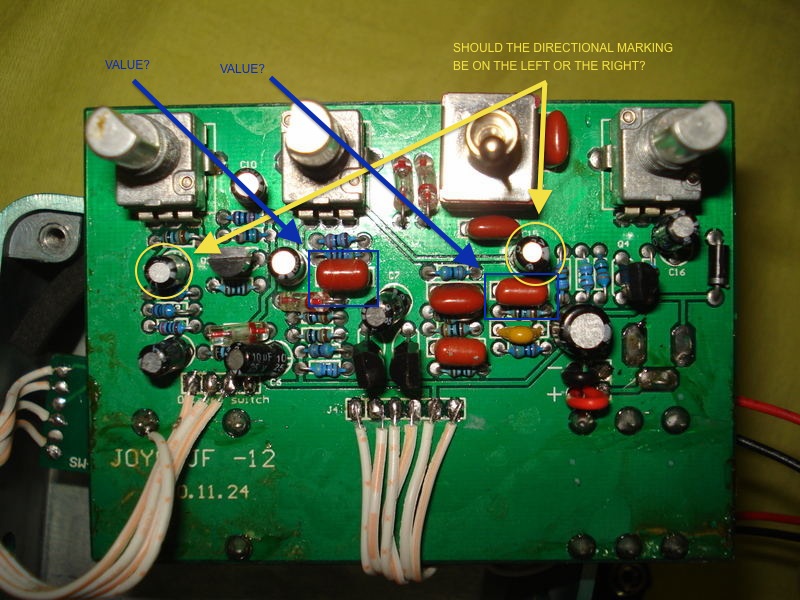 I haven't looked at my pedal yet, to determine whether or not the direction-stripe of the radial (?) capacitors match those in the image. If and when I find myself with excess free time I'll maybe try comparing it with the schematic posted by Sva99 in February, but if anyone is able to save me some time…