How to install an LED in a Proco Brat

A forum devoted to mod, tips and suggestions for upgrading and rehousing your VERY CHEAP commercial stompbox to near boutique excellence.
Post Reply
2 posts • Page 1 of 1

Have seen some old posts on this. Twas not a popular pedal, but I think I figured it out. This works perfectly, and with the previously suggested clipping upgrades it is a killer distortion pedal. Unfortunately, I have not been able to solve the FET switching noise.

As noted, there is a place on the circuit board for an LED. You just need four things to do this - a 3 or 5 mm LED of your color choice, a resistor (850ohm minimum - I used a 1k with a 5mm violet water-clear LED - these are not super bright - but if you use a water clear 3mm you will want a bigger resistor so the LED doesn't blind you on a dark stage) a JFET (I used a Fairchild J201 here) and a run of the mill 1N4148 diode.

First (see first pic), desolder all the indicated holes (there is just a little on the solder side of the board - not difficult). The negative (shorter) leg of LED goes in hole labelled 1, and positive (longer) leg goes in hole 4. You will obviously need to drill a hole for the LED through the top plate using the circuit board as a template. With a 3mm you can use a bolt in collar, but not with a 5mm. I used a plastic collar. I also have a drill press which makes drilling through the hard metal face plate easier. Be very careful if using a hand held drill.

Second, step down resistor goes in holes 2 and 3

Third, FET goes in the three holes in a row there (marked with little dashes). Flat side of my J201 faces the control pots - that makes it D S G left to right (be sure your FET is the same pinout).

Finally, down below the footswitch, are two more holes that need to be desoldered (see pic 2). Install your diode here - negative side towards the footswitch (little black stripe).

In pic 3 you will see the other mods to help make this more RAT-like. Just clip out the four diodes that you saw on the left in pic 1, and remove the other pair of clipping diodes just under where you installed the LED and replace with 5mm red LED's (oriented in opposite directions).

One thing that does happen with this - when I first plug the power supply in the pedal turns on. After that everything works as it should.

I also installed a power jack in this. Very easy. If you are doing the LED, you should already know how to do that... 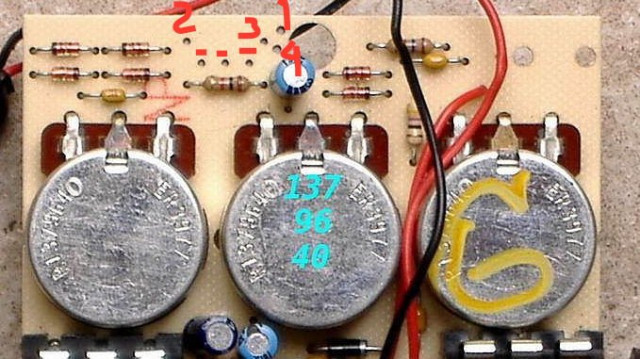 hey, thank you for that tutorial, it will be very usefull to me.

i found mine in old stuff, but the enclosure is out. i'll change the enclosure and doing these mods.
Top
Post Reply
2 posts • Page 1 of 1