A forum devoted to mod, tips and suggestions for upgrading and rehousing your VERY CHEAP commercial stompbox to near boutique excellence.
Post Reply
5 posts • Page 1 of 1

Hi Noob to the Forum! I just wanted to document a neat & easy little mod I did today on Fab metal. The 2020 lockdown has seen me obsessing over pedal mods since l finally modded my DS-1 which was only 3 years in the waiting

I then went onto looking at the Fab Metal. I was surprised how little people have done with these in the way of modifications in the 15 years it's been out.

I looked long and hard online to find any examples of mods for Fab metal, a 15 year old pedal but only managed to find one forum post where someone changed out the clipping diodes, great you can do this on nearly any distortion pedal, and another chap on youtube who changed out one capacitor (C1) to a 1uf which appeared to alter the tone and behaviour of the pedal's distortion wildly so I begain here.

I want to start out saying I like this pedal as is, cheap and it pushes all the right buttons for me as a Metal rhythm (riffs) pedal, I favour it over the Boss MT-2 and it is my go-to Metal distortion. nice and scooped in the mids, plenty of highs, wild gain and nice and tight lows- yes it does 'CHUG' Ola Englund! - Check his videos

This pedal has many smd (miniature sized) components which take a high skill level and steady hand to work with BUT there are a good handful of the larger 'through hole' components which are easy enough to change out.

There are two things I wanted to do to this pedal, firstly I wanted to make the centre tone control more useable, like we are used to, The Fab metal's tone control became very harsh albeit wild & whacky but not very useful at the top end then a very small 'sweep' at the low end of the control (adjusting from muffled to bright) within just a couple millimetres turn from the 'zero'.

When you open up the pedal from the underside battery compartment, you will find there are two pcb's, four small screws removes the top PCB which houses mainly the instrument jacks and 9v in socket. The PCB underneath is the one we will be looking at which houses all the gain & tone circuits. You need to remove the 3 control knobs and 3x mounting screws to remove this pcb. it is also plugged into the jack plug pcb via a connector lead - just pull the connector plug off the upper pcb to release it.

Here's the things I wanted to try :
Change capacitor C1 from 0.01uf to a 0.047uf 'box polyester' capacitor. This component looks to be part of the tone control circuit and is actually located on the solder-side of the pcb so easy to find! This was the nearest value I had available which was a step up in value to the stock one.

I however had to replace the stock 0.01uf capacitor back in because it changed the character of the pedal too dramatically not in a good way

Still very scooped, but very muffled sounding- I can describe it like playing with your guitar tone control rolled off and playing through neck pickup. it lost all it's 'bite', had a boosted bass frequency but it was not tight, muddy and Awful! So I knew C1 was not the capacitor I wanted to change.

Thankfully I also planned to look at Capacitor C18 which is 0.0082uf stock. I changed this to a 0.022uf film cap which was removed from my Boss Ds1 from another mod. BINGO that did it! Tone control much more useable over a wider sweep. Loved it.

Finally I changed D1 out for a YELLOW 5mm led. The pedal now has the exact same character as before, scooped and still very 'chain saw' but now has bags more Volume since changing D1 to the LED and behaves more like an amp to your guitar playing. It was cool to see the yellow LED lighting up as I played prior to reassembling the pedal

And the Tone control is much more useable and less harsh at the top end than it was before.

Fab Metal had very good dynamics (not too compressed) before the mod. Now it plays and sounds like a much more expensive pedal. These mods are easily reversable being as we only changed out 2 components. I can't see anyone wanting to change C18 back though.
Top

Is this what you're talking about? Which one would be C1 and C18? 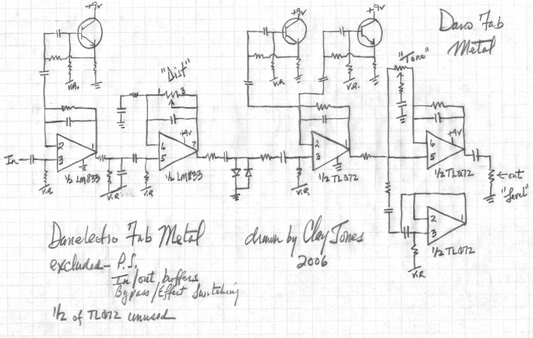 FiveseveN wrote:Is this what you're talking about? Which one would be C1 and C18? 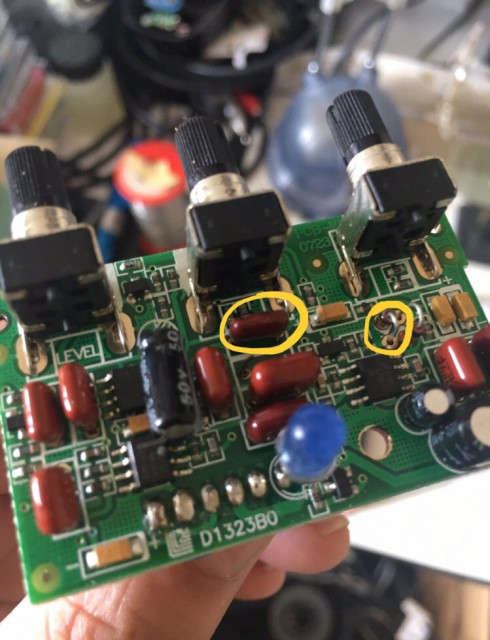 Hello, is there somewhere the schematic of the Danelectro FAB Metal with the values?
Top

Ichabod_Crane wrote:Hello, is there somewhere the schematic of the Danelectro FAB Metal with the values?