A forum devoted to mod, tips and suggestions for upgrading and rehousing your VERY CHEAP commercial stompbox to near boutique excellence.
Post Reply
110 posts

fozziemusic wrote:Very nice actions so far! I'm quite an electronics newbie, so I'm unsure whether I can answer all questions, but tracing out leads with a dmm should be doable

Thanks !
What i'm asking for is fairly simple. I had to make suppositions about the copper traces that run under the components (either in the shadow of electrolytic caps, hard to see under silkscreen despite the high quality pics, or worse, under the integrated circuits). I've highlighted these supposed traces in contrasting color on the images above, and they have to be checked. This can be done visually for some of them, and electrically for the ones that run under components. Just use your multimeter in "beep" mode, and touch both ends of a trace containing orange (or green) portions on the pictures above.
If it beeps, i was right. If it doesn't, there might be another pin nearby that does, and the supposed trace shall be corrected.

I think that i've already corrected most of them by comparison with available Memory Man schematics, and likeliness of the routing (shortest path for example). Verification is still welcome !


fozziemusic wrote:How do I see whether a cap is polarized?

It has a grey band with "minus" signs, towards the negative lead. This is about the only marking on the electrolytic caps to be seen on the pictures ...
It looks like only C20 doesn't have one, so i wonder if it is a non-polarized cap. It might have a "NP" marking.
Anyway, looking at the values of these caps is more important !

About the original questions : Here are the new files.
(btw, is there a way to update files, in order to keep the thread fit ?) 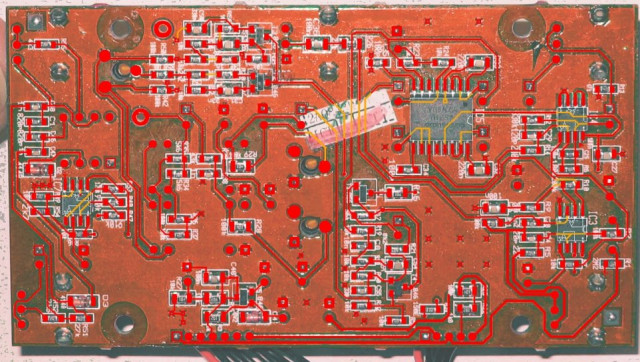 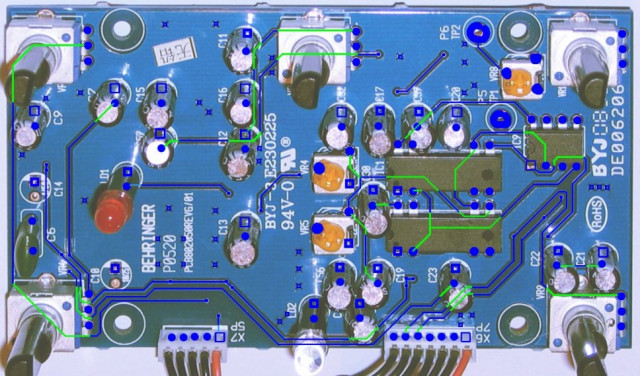 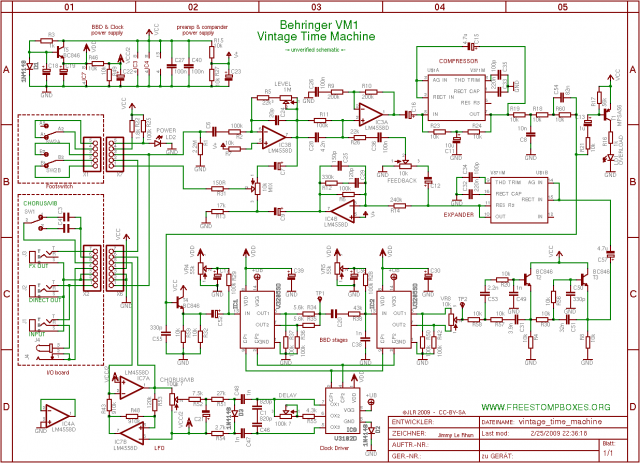 These are the cap values:

C20 looks different from all the other ones, can't find a marking that indicates polarity (all other caps are black or very dark blue and have "0>0>" marking on one side from top to bottom, c20 is lighter blue and doesn't have this mark).

I'll try to get the other answers as well. Thanks for the suggestion of the leads, worth a try as it's so simple to test

Great !
I've updated my schematic with the values, but before posting it again, did anyone find mistakes in the previous one ?
There should be some protection diode and filtering cap on the I/O board, this schematic bit is a pure supposition

I'm having trouble with orientation and type of D1. I's expected it to be a zener diode.
Sorry. Plain out of planes.

Thanks Dirk, you're right !

I must have copy-pasted too fast ... it's D4, and it's a 8.2V Zener in the opposite direction, cathode to the base of T5.
I expect D1 to be the reverse-polarity protection diode, on the IO board.
I only give negative feedback.
Top

Sorry for my silence, it's been crazy at work so I haven't been able to do more work yet. I hope to do the schematic checking, but it may take a little while....
Top

How does this fare compared to a Memory Man?

Any mods to convert this to MM specs perhaps?

Entrant_21 wrote:How does this fare compared to a Memory Man?
Any mods to convert this to MM specs perhaps?
Cheers

It should be a straight copy. But of which version

EHX is known for slight variations from batch to batch.

Here is the latest (still unverified) schematic.
If someone could trace the IO board, it's the last thing missing. Even if it looks done, it's pure speculation from me ! 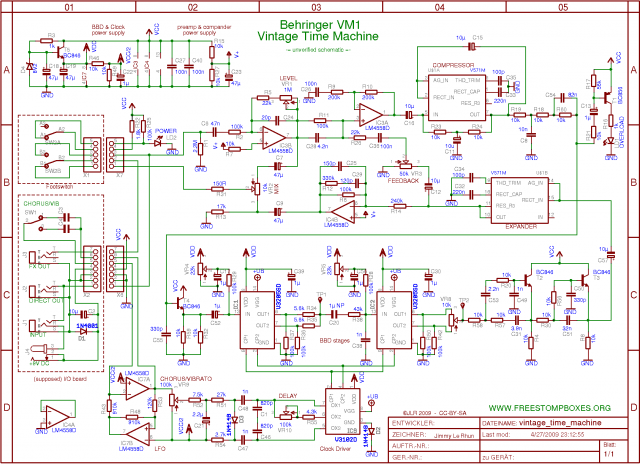 Has anyone got any theories or opinions about running these at 18 volts?
Top

What's your goal in increasing the voltage ?
I only give negative feedback.
Top

What's your goal in increasing the voltage ?

Increased headroom was what I had in mind.
Top

One little question:
My Behringer VM1 is not true bypass.
I need help to my circuit. Which parts must be change , wich components remove.

I want to insert a DPDT sitch with Millenium Bypass.

I cant't read this in the schematic.

Just got a VM-1, satisfied overall save for the weak modulation.

Was wondering if changing the value of the vibrato/chorus pot would change anything ?
Or maybe there's a specific trimpot to tweak ?

I was just looking at this as a possible doner case if I DIY'd a EHX Deluxe Memory Man with V3205s and noticed that no one seems to have mentioned that this uses a V3102 rather than the 4047 of the Memory Man so it's not a straight clone.

Then comes my next question, can you use a 4047 to deliver the clock to V3205s or did they choose not to from a design point... will it work just as normal or do I need to switch the outputs or something?
Top

As long as you make sure the clock amplitude voltages delivered by a 4047 are the same replacement of the 3201 clock circuit by a 4047 circuit (the original DMM clock circuit) should work. Bear in mind you'll still have to find an alternative to generate the Vgg voltage as well.

If, and I say if, a 4047 is able to give a stronger clock output when driving 2 BBD's, it might be that the BBD's are driven "better" and therefore give a cleaner delay signal. This could very well be the case.
Sorry. Plain out of planes.

I think it will be doable but i'm gunna have to do some actual research.
Top

I think it will be doable but i'm gunna have to do some actual research.

Help?
The MN3102 provides a supply voltage and to antiphase clocksignals to the BBD chip. What exactly would make it quieter??
Sorry. Plain out of planes.