A forum devoted to mod, tips and suggestions for upgrading and rehousing your VERY CHEAP commercial stompbox to near boutique excellence.
Post Reply
12 posts • Page 1 of 1

I'm wanting to rehouse this and make it true bypass, so I figured I'd see about some mods. Particularly, adding more depth or thickness to the chorus setting. Any other mods welcome, as well.
Also what kind of switches should I use for the modes?

I'll be putting this in a 1590DD-sized enclosure along with the Phase Modulator from the same series (no mods, I love the PM7 as-is) so space for extra knobs and switches won't be a problem.

Nevermind... Found what I was looking for.
Top

care to share your findings? i'd also be interested in any sort of info regarding rehousing and true bypassing ibanez 7 series pedals. thanks.
Use boost pedals
Top

care to share your findings? i'd also be interested in any sort of info regarding rehousing and true bypassing ibanez 7 series pedals. thanks.

It was about which transistor to short to get it to always be "on"... Figured it out about a minute right after posting. I'm still working on the rehouse, though.
I'd still like some help getting a deeper chorus sound, though.
Top

hi! i'm rookie in this stuff so...
i want to reduce pedal output level. it it slightly boosting signal when it's on, expecially with distortion in front.
here's shematic

what should i change?
Top

r36 r43 are limiting resistors on the outputs. you can put a 5k trimpot there on each one and dial in your level of reduction. or you could put it as a pot to ground. this may affect the sound somewhat desolder the resistors add jumpers and try it out dial it in till you get it. they are like 2 bucks at rat shack

A skight increase of R23 and R31 will help you better and will only alter the level when the pedal is engaged.
Sorry. Plain out of planes.

It may be completely off topic, but not that much beacause I want to speack about another Ibanez flanger.
I just happened to buy a used CF7, and I came across your web page about this unit. And I can assure you that the mess with the 2 additional cas and the wiring on the solder side of the PCB is all original, as my unit looks completely identical to yours.

Yeah, I mean CF7, although I know I'm off topic (sorry for that).

The only reason I mention this here is because I realized Mirosol is a FSB member with this topic while I just bought a used CF7 four days ago.
Top

Hate to bump a dead topic, but I recently acquired a CF7 pedal and also noticed that it boosted volume when enabled (by around 4db). Found this page and tried the suggestions here, but no go - raising R23 and R31 made no difference, and R36/R43 affect the bypassed volume as well. I did find a way though:

Looking at the schematic slash555 posted (and probing around with my scope) I found out a couple things. First, the pedal combines the bypassed signal with the modulated signal, both at the same amplitude as the input, meaning the output is slightly less than double the voltage of the input. Second, the bypassed signal is switched in and out with a mosfet, Q1, but the normal/wackd switch shorts it so that it's always coming through anyway, meaning that any gain reduction for the dry signal will also reduce the bypassed signal, and there's theoretically no way to reduce the output below unity. Third, the volume output in Wack'd mode is the same as the bypassed volume.

So how do you fix this if it's unfixable? Well, I ended up having to cut a trace to do it. The trace going from Q1 to the normal/wackd switch needs to be cut, and a 22k resistor added across the gap. That reduces the gain of the dry signal when the effect is on, but Q1 will short the resistor in bypass mode making it unchanged. To reduce the wet signal, I changed R18 from 2.2k to 12k (actually 12.4k since that's all I had, but the .4 should make no difference). Now the output volume is exactly the same as the bypassed volume

One caveat - the volume in Wack'd mode will be reduced now, though perceptively it doesn't sound like it's quieter to me. 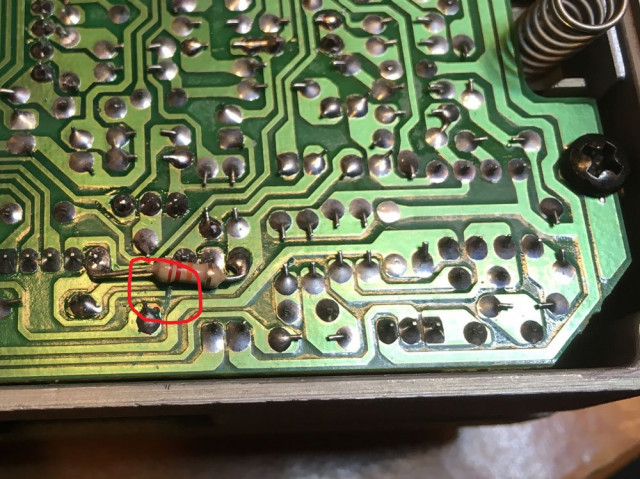 I have drawn your modification into the schematic. 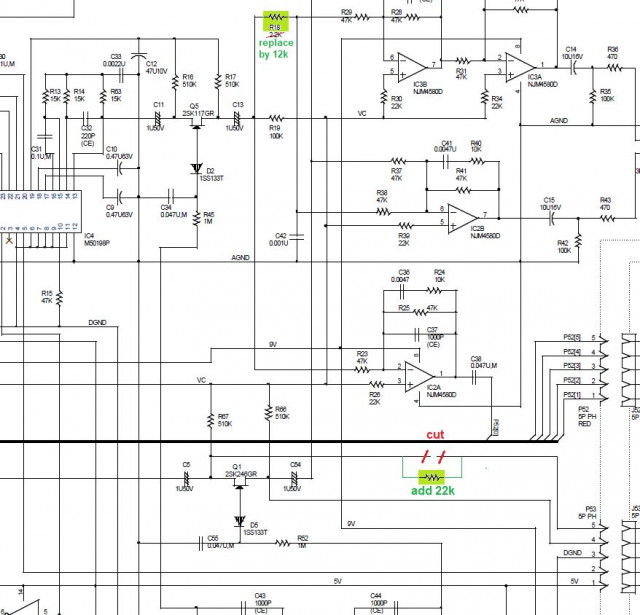 Thanks for sharing your findings..!

Aside from the volume reduction mod, if the "bypassed signal" (when mixed with the modulated) was switched off, would you now have a vibrato effect?
Top
Post Reply
12 posts • Page 1 of 1