A forum devoted to mod, tips and suggestions for upgrading and rehousing your VERY CHEAP commercial stompbox to near boutique excellence.
Post Reply
173 posts

Kaiser Kluge wrote:Looking to have this guy rehoused. I contacted a few places, but they say that they have an agreement with Visual Sounds to not rehoused their pedals. Any idea who doesn't have this agreement and would do this?

I can't imagine many of them having any type of agreement, because there's probably been zero correspondence between the two.

I think that getting stuff re-housed just takes a bit of persistence, because there's usually at least one element that is a pain to deal with - it could be dealing with the particular type of bypass, or replacing some board mounted component (or ALL of them) with "traditional" pots or jacks (meaning that WIRE is required), or who knows what else?

Visual Sound and other companies also have some SMT stuff now. While it shouldn't matter at all as far as re-housing goes, it might be enough to scare away people from doing it for you.

Just guesses, but I bet if you pressed these sources, that's the reason they'd give you. I'd love to re-house the Danelectro mini pedals in my collection, but it's just a pain (for me), so I don't bother.
Top

Any one know how to get the knobs off of the vt999. I think they might be glued on

prettyfly wrote:Any one know how to get the knobs off of the vt999. I think they might be glued on

No, they are not glued, just really snug. You can use two teaspoons as levers, gently and slowly.
I only give negative feedback.
Top

Or try something like this tool: (not my pic) 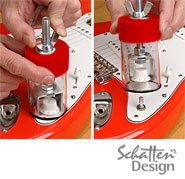 Woohooo! I just spent the entire of yesterday and half of today rehousing my Vintage Tube Monster and it was a success!
Will upload pics soon.
Top

This has been an interesting topic for me as a beginner builder.

I have two Danelectro FAB pedals I got for next to nothing (Flange and Metal) that I rehoused into single gang conduit boxes and couldn't be happier with how they look.
Texas Fuzz
Top

Here are some pics of my Danelectro Rocky Road rehouse.

And here's a vid:

I have been following the process and tips from FreeStompBoxes (and a couple of other sites) to rehouse a Cool Cat Vibe for my friend. Unfortunately, I seem to have hit a snag or two and I cannot get this thing to work. I feel like everything is wired as it should be; however, when I engage the effect, the LFO bulb doesn't light, the LED doesn't light, and I just get my dry guitar signal as output (the same dry signal I get when the effect is in bypass).

One interesting thing I have noticed is that the LED does light up when I touch the cathode if the effect is on (the LED also lights up when I touch the unused lug of the 3PDT switch when the effect is bypassed). In my mind, that tells me that the LED is not connecting properly to ground; however, the 3PDT's "ground" lug of the LED section (others seem to be calling this the "power section") is DEFINITELY well connected to ground).

Based on my best probing with a multimeter, I seem to have 9V at the DC jack, 9V at the input to the PCB, and 9V exiting the LED so I *THINK* the board is getting power.

thieves wrote: how to rehouse the french toast (and other dano effects)
remove all the pots-switches-leds-jacks
only two pcboards remain
the board attached with the footswitch is useless and should be removed (it's for bypassing purposes)
next step is to connect the new pots(metallic),switches,that are found on the main board
the 2 boards are connected by some cables
blue=send
green=9V
yellow=ground
orange=no bypass send
red=return
brown=led control

for the french toast remove brown and orange so that we are left with the in,out,9v,ground wires

digging this old thread out as I have a problem myself with a french toast - I left out the switching board and connected the in out 9v and grd as indicated above - I tried to follow what others did, used the 4 pins with the right colors, but...the pedal doesn't work as it should, it makes fregging crazy noises, too much noise it's unusable. Level pot doesn't silence the pedal as a normal volume would do. EQ seems to work in the correct way. dist pot is too much gain. I see that on the switching board there are other components between in and out jacks and the blue and red wires. I guess some of them are part of the circuit and not of the switching, but I have problems following the pcb and figure what makes the pedal work perfectly...anyone has some clues?!
Top

I didn't use any of the second board on my first stab at the French Toast rehouse and it worked as it should. It was pretty noisy so I tried adding in some of the filtering that is found on the second board but I don't think it made all that much difference...from what I understand even the original Foxx Tone Machine was pretty good at amplifying radio frequencies and misc other noise! I suspect that you have some other wiring issues going on that are preventing you from getting the sound you are supposed to. First step is to check, double check, and triple check all of your wire paths and soldering joints (plus see if anything might be shorting out on your enclosure).
Top

I'll quadruple check but my feelings tell me that those extra components won't harm the ckt...
it is too noisy now...thx anyway for the reply.
Top

I have reused most of the components. I had to cut the pcb with IP/OP jacks with a band-saw.

The only extra stuff I bought was the enclosure, the LED bezel and the dc socket.

In hindsight, I should have left a bit more space on the bottom for the battery. 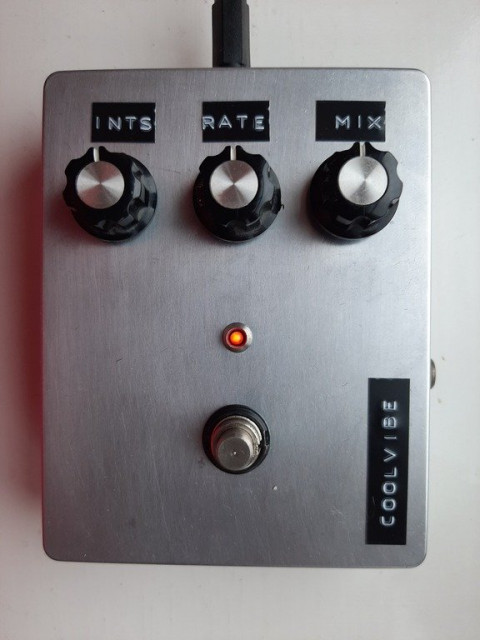 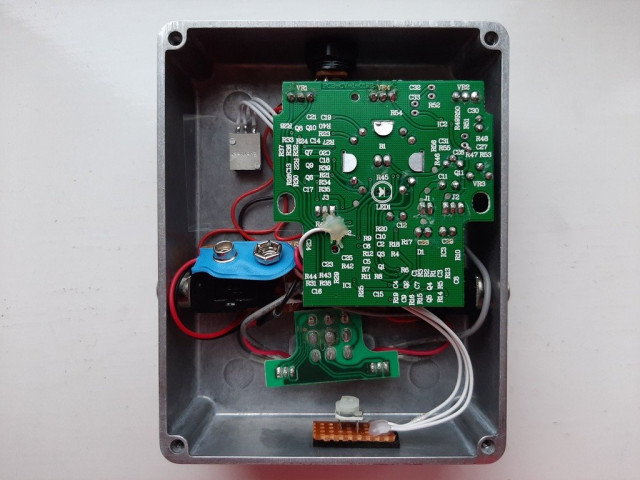