Original effect designs complete with schematics, layouts and instructions. Freely contributed by members or found in printed or online publications. Cannot be used for commercial purposes without consent of the respective owners of the copyright.
Post Reply
1 post • Page 1 of 1

The circuit I've just drawn up (see below) was my first attempt at a phaser way back in 1972. The circuit was developed at Texas Instruments in Manton Lane, Bedford (where I worked for a while as a student). In those days, I used 741S "low noise" op-amps. The whole circuit works from a single 9V battery, and a friend of mine just built one using a lone TL074! The sweep oscillator is a Schmitt relaxation oscillator, and rather than take the squarewave from the output pin (which could be used to blink an LED at the repetition rate), the output is taken across the timing capacitor, giving a slightly curved triangle wave. If you really must have a perfect waveshape, you can build the two op-amp version of the oscillator, but you won't hear the difference!

There are only two phase shift stages, so the effect is mild - I built them with up to six phasing stages, and introduced active feedback on later versions, for a deeper effect. However, if you want that "Phase 45" sound, this gets you there. It's really cheap to build, and just has one (speed) pot and the bypass footswitch. There's no ticking from the oscillator, and only one adjustment to make - the 2.5kΩ preset needs to be tweaked for a symmetrical sweep. I used to set these up by playing an FM radio tuned between stations through it - phased white noise makes it easy to set the bias preset!

Construction isn't critical - I've built them point-to-point, on stripboard and on dedicated PCBs. I used to build these into a slightly larger diecast box, with a fuzz in the same box (which could be switched either before or after the phaser. The FETs don't need to be accurately matched - I just used ones from the same batch.

The only "modern" improvement I might make these days is to add an output buffer op-amp, for a lower output impedance. 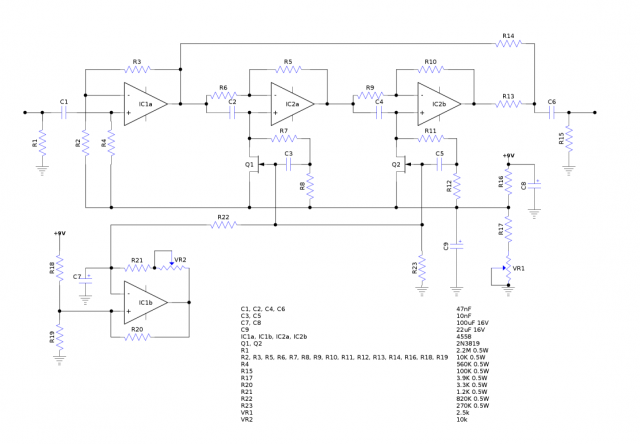