Original effects with schematics, layouts and instructions, freely contributed by members or found in publications. Cannot be used for commercial purposes without the consent of the owners of the copyright.
Post Reply
187 posts

I've always liked the tone benders, and thought that it would be fun to build a few with differing component choices and various transistors. Over the last few months, I've made about twenty of the things - all slightly different. I've extensively played through them, and have chosen the two or three that sound best (to my ears). The very best is shown here - it's a smoothed silicon bender, and just sounds great! All the other prototypes were put into diecast boxes and given to musician friends as presents. None of them sounded bad - it's just that some versions just had the edge over some of the others.

Anyway - enough chat and here's the layout - a Vero version and a PCB:

Have fun!
"Why is it humming?" "Because it doesn't know the words!"
Top

no schematic?
"You've converted me to Cubic thinking. Where do I sign up for the newsletter? I need to learn more about how I can break free from ONEism Death Math." - Soulsonic

Schems! I've dug some silicon Tone Bender's I've made. They're underrated. I think the top end edge you get with the silicon helps the texture of the fuzz. With all the gain going on in a bender its easy for things to get too mushy. Especially when using too high gain of germaniums.

How about some sound samples? that would be killer.

Of course there is: 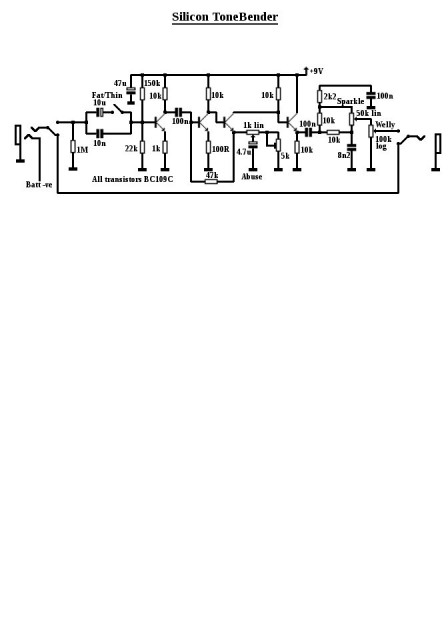 Adjustment: set the 1k "Abuse" pot halfway. Play though it, and adjust 5k preset until "gating" just stops. That's it!

You'll find that it has plenty of output, that the "Abuse" control gives a good range of colour, the "Sparkle" control has a very wide range and the sound is remarkably reminiscent of early Jeff Beck (certainly not a bad thing!).

Put small value capacitors from base to collector of the middle two transistors - start with 47pF. This "smooths out" the sound a lot, but reduces the treble available.

If you have radio interference, put 100pF from base of the first transistor to ground.

Experiment with the capacitor values in the tone control - the 8n2 could go as low as 3n3, which would give a ridiculous range of treble control!

Increase the value of the 47k feedback / bias resistor - try as high as 470k. The gain will rise, the touch sensitivity will disappear, and it will become a high gain screaming monster!

"Why is it humming?" "Because it doesn't know the words!"
Top

Nice job on the Vero layout!

It's quite a lot tidier than mine. However, I prefer the PCB version.
"Why is it humming?" "Because it doesn't know the words!"
Top

That's an unboxed build of the original vero layout with BC109C.

not bad! sounds good dog!
"You've converted me to Cubic thinking. Where do I sign up for the newsletter? I need to learn more about how I can break free from ONEism Death Math." - Soulsonic

That's an unboxed build of the original vero layout with BC109C.

I like it , very nice.
KindaFuzzy - Looks like a blue nail polish and nutella sandwich.
Freekish - "Our originality is in the basement. Our business is in the toilet"
Guitarlcarl - I did take offence at being called an idiot by a moron.
Top

...and isn't tonebender supposed to have 3 transistors?
Top


That's what I was thinking when I started reading it. I just built Doug's 'Hot Silicon'.
Be seeing you!

...and isn't tonebender supposed to have 3 transistors?

Yes, but the tone control isn't a typical tone bender type
although it's closer to the MKIII circuit. The 4th transistor is a
buffer so the tone section won't load down the circuit.
Not that this is that close to a Ge tone bender in the first place
circuit wise.
Top

...and isn't tonebender supposed to have 3 transistors?

Looking at the "Hot Silicon" circuit, it's not far away. The circuit actually came from a Colorsound "Tone Bender" that didn't work very well. It produced a nasty, gated spluttery racket. A couple of resistor changes and the addition of the preset cured all the problems. The last transistor is just to buffer the tone control, and has little effect on the sound of the thing. My latest version has a fifth transistor, to provide an output buffer!
"Why is it humming?" "Because it doesn't know the words!"
Top

Wow. You don't give credit to where the circuit came from? That distortion section looks to be the one that has been posted at Aron's for years. The Hot Si input section gain was designed for about a gain of 10 and the input resistance for loading of the pickup.
Top

gus wrote:Wow. You don't give credit to where the circuit came from? That distortion section looks to be the one that has been posted at Aron's for years. The Hot Si input section gain was designed for about a gain of 10 and the input resistance for loading of the pickup.

The circuit came out of tracing a faulty Colorsound Tonebender which sounded horrible when it was working! A few resistor changes (to the values in the layout), a new tone control, and it sounded great.

I built about a dozen Tonebenders - three with germanium transistors, and the rest with silicon. The silicon versions were more consistent (mostly consistently bad), and the germaniums mostly had low output levels. I gave up on the germanium ones, and recovered the transistors for a few fuzz-face builds.

I messed around with the values of the silicon ones until I got to something that worked with every guitar I plugged in. Single coil and humbuckers give similar results, though the onset of distortion is much earlier with the humbuckers. Since my original building session, I've modified the silicon bender a bit more - I've changed some of the values in the tone control circuit, added a unity gain buffer after the tone control, and made the input amplifier have a higher input impedance, with lower noise and a bit more gain!

If anyone's interested, I'll put the changed layout up here.
"Why is it humming?" "Because it doesn't know the words!"
Top

Good! Here's the high-gain version. This sustains for weeks!

"Why is it humming?" "Because it doesn't know the words!"
Top

Your input resistance might not be as high as you think it is and how stable is the input bias (base current vs bias current vs temp).
You have a cap bypassed emitter resistor. hfe x emitter leg resistance in || with both of the bias resistors.

What Colorsound has a 100 ohm emitter resistor with a 10K collector and a 5K bias pot and 47K feedback/bias resistor?
Top
Post Reply
187 posts