Me neither. That's why I was trying to encourage experimenting.

Electric Warrior wrote:Me neither. That's why I was trying to encourage experimenting.

The Fulltone Soul Bender uses a trim pot to simulate some leakage at Q3. Guess their transistors weren't leaky enough.


Yep, I know. I've traced SoulBender for this forum :]
Top

The one I built last year with the 220k/47k bias string sounded better with the leakage simulation trick. But 1 meg between B and C is what got me to similar voltages as vintage units. That 500k trimmer on the Soulbender makes me think what they use for Q3 must truly have zero leakage.
Top 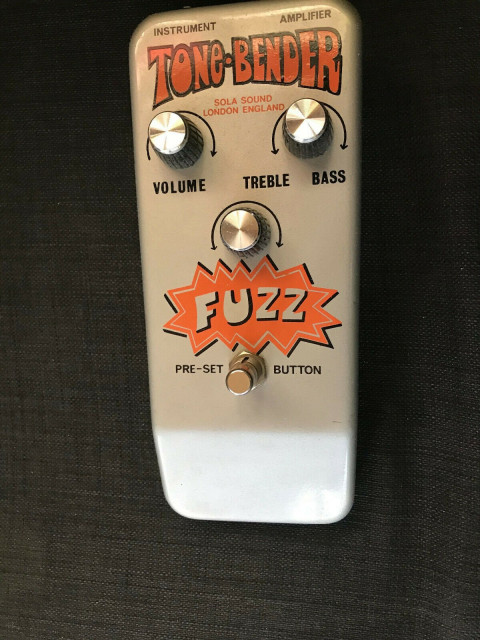 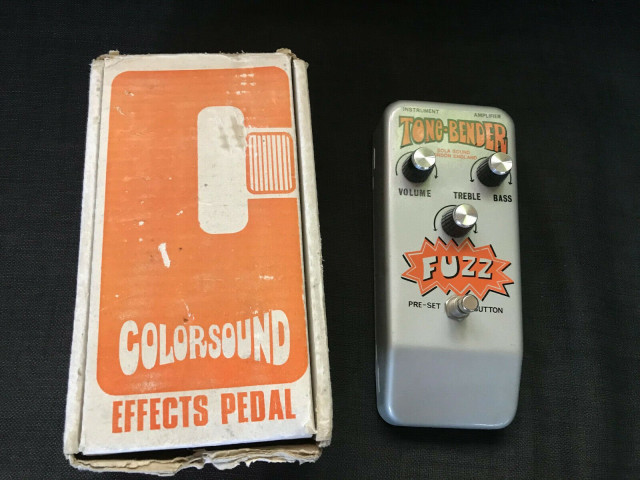 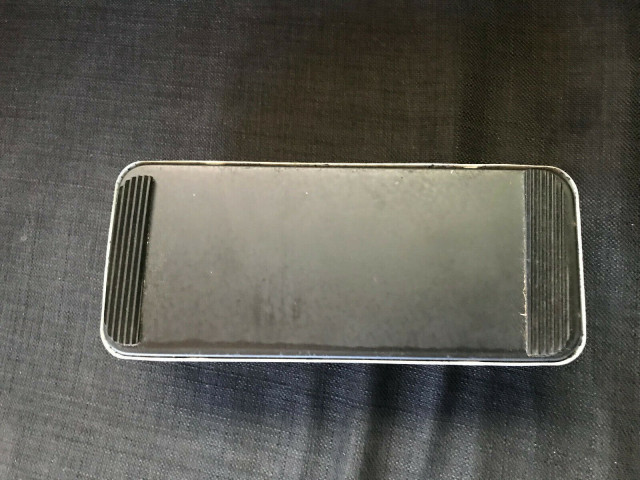 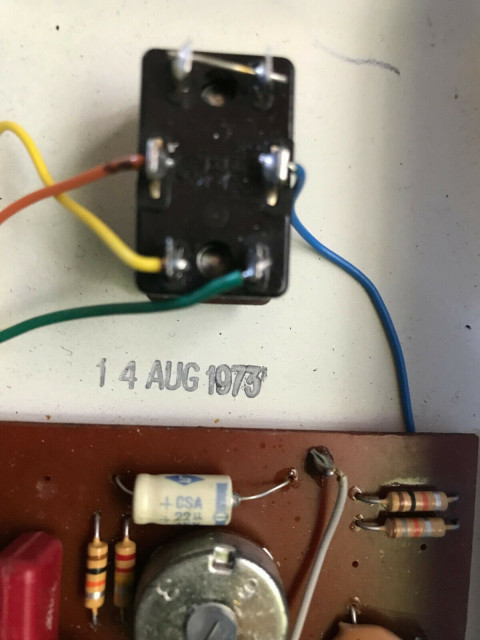 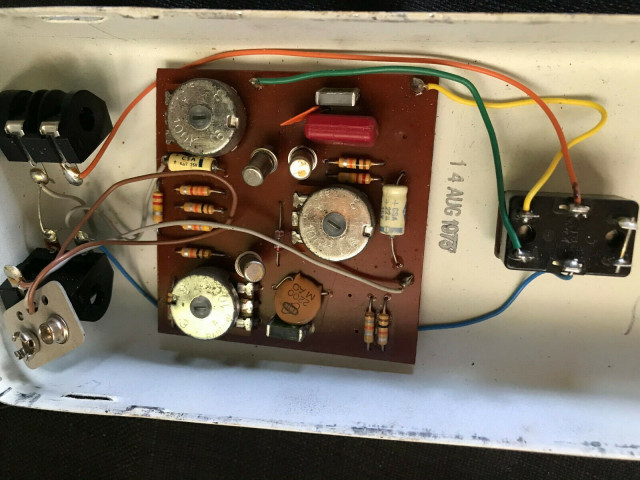 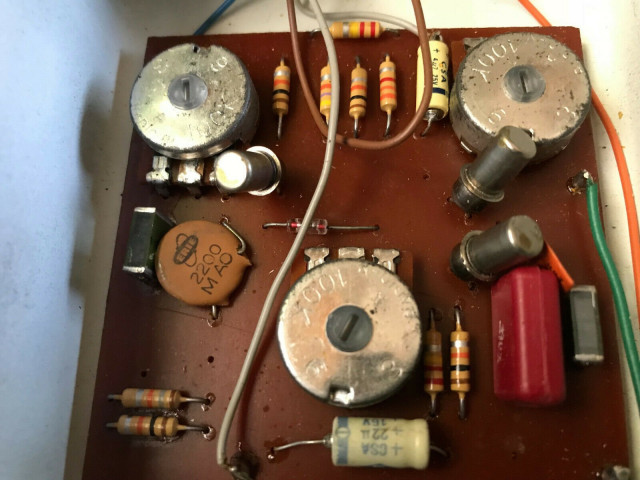 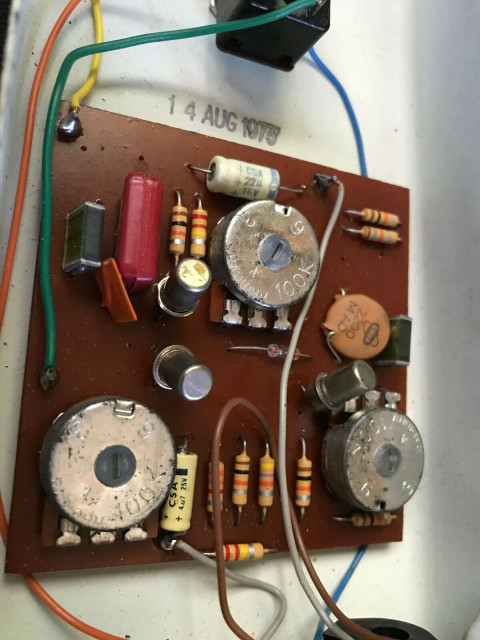 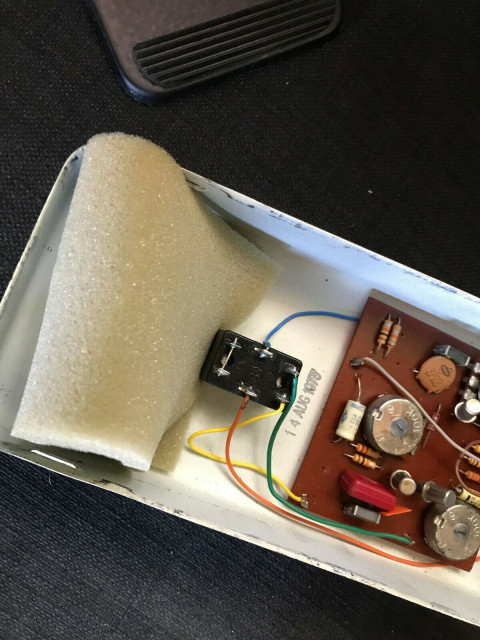 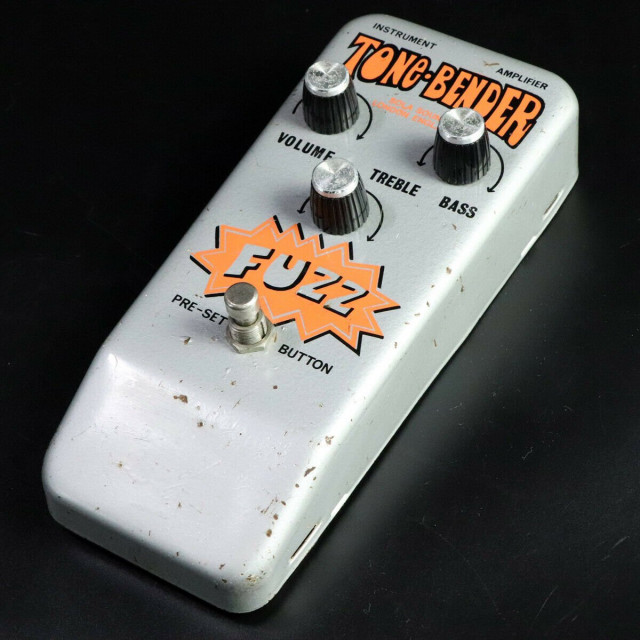 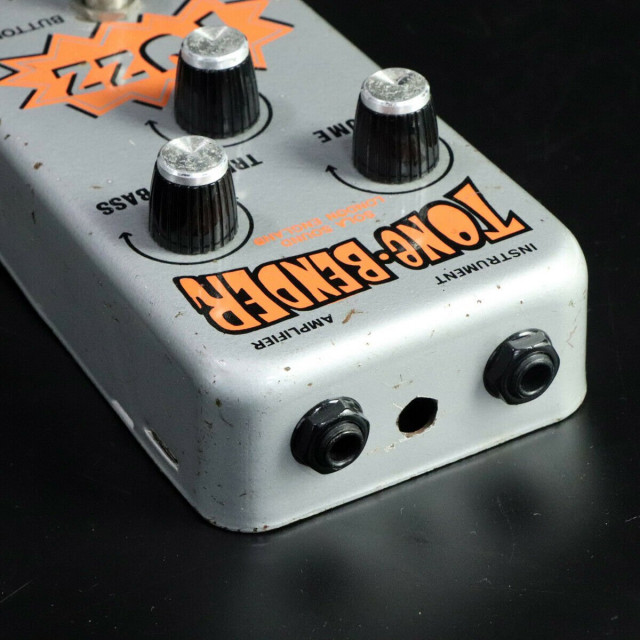 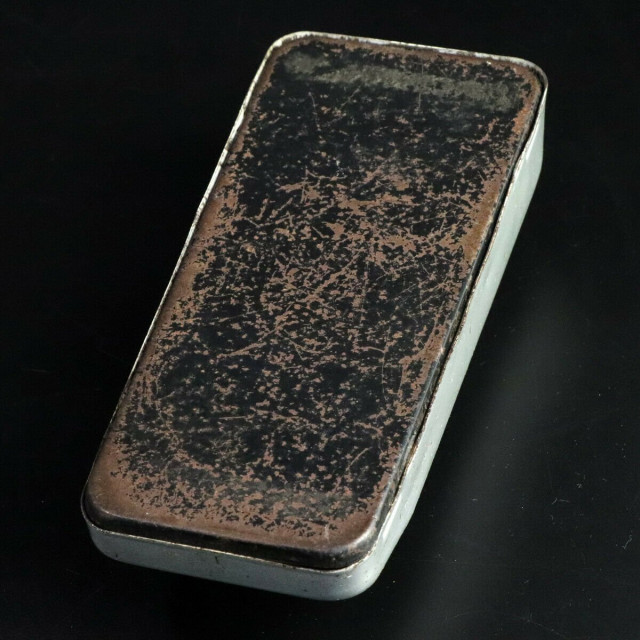 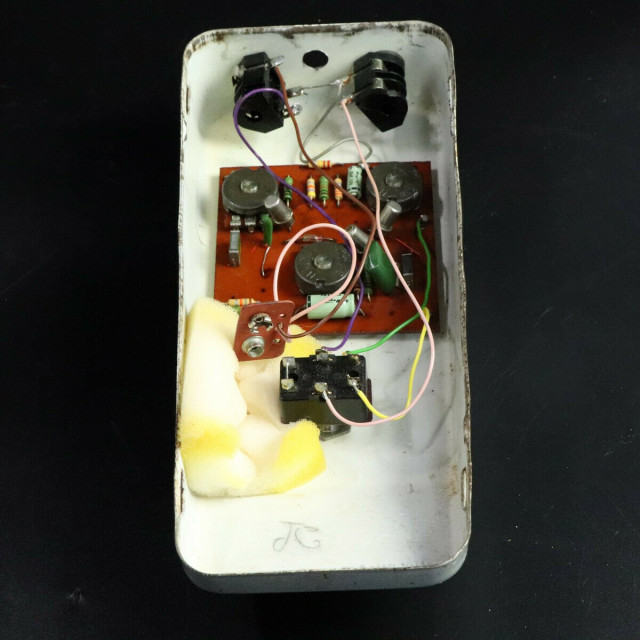 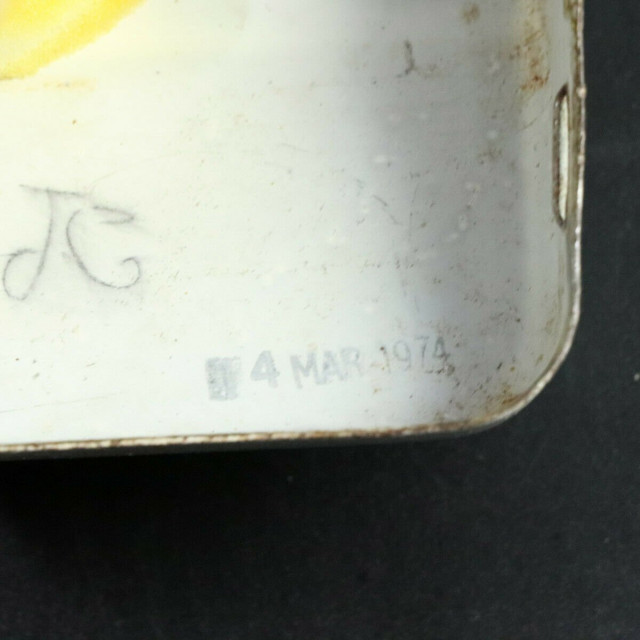 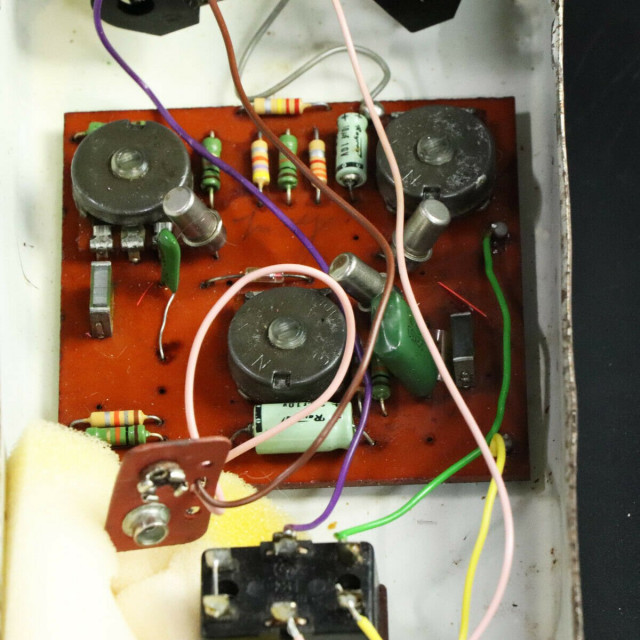 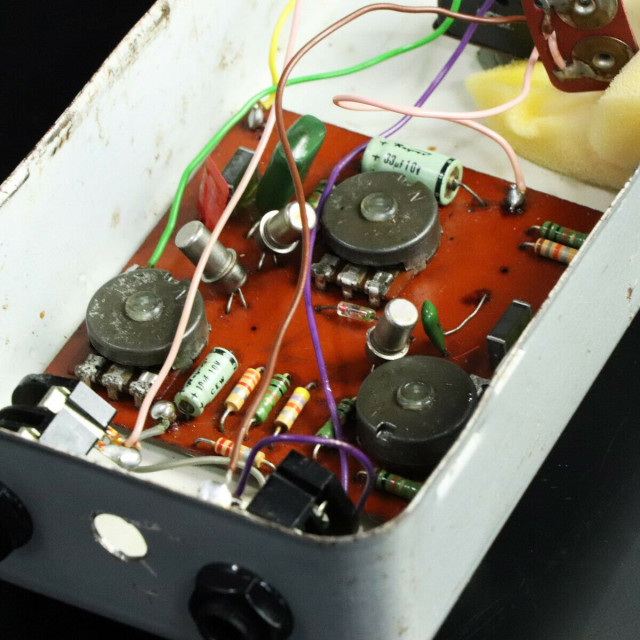 First post ahead, moderators may feel free to move this if it doesn't belong in here.

So I've inherited my dad's old original Sola Sound MKIV Tonebender that he bought new circa 1975. It's not in great condition cosmetically and when I used it in my early 20's it broke on me right before a gig, after which I broke a resistor in it when I popped the back off it to do some troubleshooting. Last night, almost ten years later, I finally got it on the bench and it's now up and running and sounding as good as ever. I'm very specific in my needs as a player however, and since it's by no means a museum piece I'm going to try and see what I can get out if it. At first I was surprised to find that it had such low output, but removing the 220k limiting resistor resolved that issue. There are still two things I would like to address with so that I could put it to good use. I'm by no means an engineer so some feedback on my thoughts would be welcome.

1. The gain in these things is nothing but ridiculous. I know that that's a characteristic of MKIVs but the minimum amount of fuzz is a lot more than I would probably ever need or ask for. Thinking about offsetting this with a 100k resistor so that the maximum fuzz amount would be where the minimum is at right now. An internal trimpot would provide more flexibility.

2. After trying it out in my rig last night I could conclude that the the pedal works a lot better in front of a cleaner amp compared to the dirtier JTM45-style power tube breakup that I usually dial my amp for. Much like my experience with the Fuzz Face, the top end was lost in that context. While the tone control could dial it back in, it was at the cost of that lovely bottom end which instead became gnarly and unpleasant compared to the sound with the pedal bypassed. I've gotten good results when bypassing tone stacks in the past, and I think think this pedal could benefit from it. Would probably need to complement it with a resistor to tame the output a bit (and perhaps filter out some of the very low end), but a tiny bit of further volume boost could come in handy to compensate for the low gain mod.

Since the pedal performs so well into a clean amp in it's stock configuration I would prefer to have these mods switchable. As much as I oppose original condition snobbery when it comes to music gear, drilling holes into this beautiful case feels wrong. My thought is to instead replace the original pots with push-pulls to activate the mods. Replacing them is a bit of a headache due to the orientation of the original PCB-mounted pots, but it could probably be done by physically mounting solder eared pots to the board which then would be wired into the circuit.

Any feedback is welcome, and I would also be happy to hear about any other tweaks you've done to your MKIVs!
Top

I guess first off - are you really really sure you want to do this to a vintage MKIV? So that out of the road, as you have already said yes you do.

MKIV / MKIII tone section basically pans between two filters - you can easily change either side.

D*A*M Fuzzsound MKIII replaces the 100n on the output with a 220n, and removes the 100k to ground. This is near enough to a direct out. The 2.2n cap is increased to 4.7n to make the treble side less shrill. Some D*A*M MKIII/MKIV use a 10n in this position for the same reason. Maybe check out some D*A*M layouts / schematics and you might see something that you like the look / sound of without having to resort to complicated switching.
https://vero-p2p.blogspot.com/
Top

I think it would be a pity to modify the original pedal, I would personally leave it as it is and make a new one with my sound preferences.
Top

You should upload photos of the original here, so we'll have some documentation of it before you do any mods.

I agree with Manfred, it would be easy and fun to build another one with the features you want so the original could stay original.
"Analog electronics in music is dead. Analog effects pedal design is a dead art." - Fran
Top

Thanks for the replies!

I can understand where your scepticism comes from, but given the fact that I've grown up playing this unit I really want to be able to put it to good use. That kind of family history plus the fact that it's kinda already been messed up doesn't really make me feel bad about making alterations to it, yet still having access to it's stock sounds. Having it on my board wouldn't hurt my vanity either, compared to putting on yet another clone in an unpainted hammond case

Last night I did som A/B:ing with a friend, comparing it to a Hudson Electronics Fuzz (pretty much a straight up MKIV clone made long before the Broadcast craze). Playing them through a '65 DRRI revealed some minor differences; the Hudson had a slightly more limited gain range (not getting as clean nor as dirty as the original) and a bit more sterile upper mids. It was understandably a lot louder than the original, but where the original really shined was in it's organic distortion characteristiscs. Where the Hudson is a bit spittier on single string playing and starts to gate when turning down the guitar volume, the original is breathier and actually cleans up rather nicely. We concluded that the Hudson generally comes VERY close to the original, but some cork sniffing revealed it to be slightly more leaning towards say a Big Muff. Yet from time to time I had a hard time hearing a difference at all, as the difference seemed to blur when playing in certain registers.

This had me thinking about another way to approach this pedal; adding a trimpot as a voltage divider at the input would probably be a better way to lower the gain in this particular unit and my particular situation. I actually thought about adding some kind of input gain pot to it in my teens, as I really liked the crunchier sound that the pedal got I turning the guitar volume down. That might just be the ticket to keeping the high end from farting out when playing through a dirtier amp, and is something that could be switched in and out using a push-pull for the volume pot. That said though, the pedal sounded a lot better through the DRRI than through my amp (basically a modded Classic 30 copy with a lot of JTM45 flavour) so I might just leave it for what it is in this current state.

Next step would probably be to study how the Hudson Fuzz achieves a higher output level (probably a combination of tweaking the limiter resistor value, the value of the 10k resistor connected from the .01uF cap to ground and the volume pot value) and then I'll probably wire up a 100k/250k trimpot at the input just to see how it performs. Here's some eye candy for you though 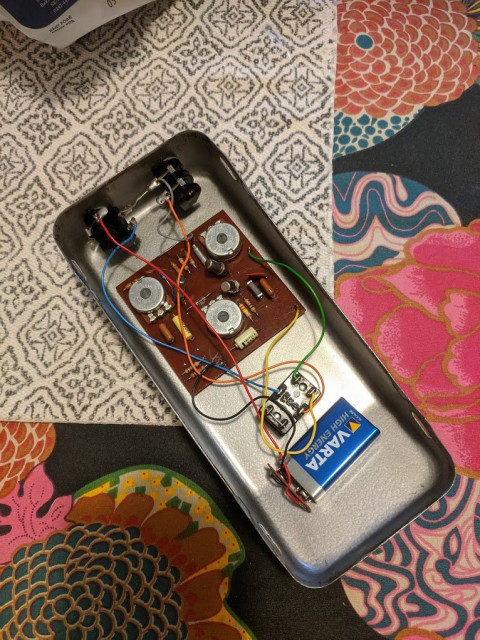 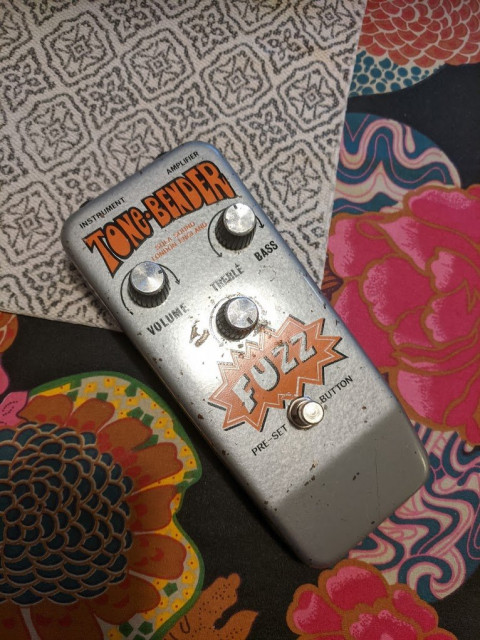 Why not build new electronics to go in the old case and put the old guts in a plastic bag somewhere safe..

That way it will look like your dad's old pedal and if you ever feel the urge to put it back to stock you can do.
Politics is the art of so plucking the goose as to obtain the most feathers with the least squawking. - R.G. 2011
Jeez, she's an ugly bastard, she makes my socks hurt. I hope it's no ones missus here. - Ice-9 2012
Top
Post Reply
31 posts