Forum dedicated to helping people debug and troubleshoot non-functional pedals or builds. Please use an clear and informative title, indicating circuit and basic problem. Don't forget to mark the issue as fixed if this is the case.
Post Reply
6 posts • Page 1 of 1

Hello
I’m experiencing a rather strange behaviour with an old Shin-Ei Wah Fuzz i am servicing : The fuzz works fine, but the wah is verrrrry silent.

- I unsoldered and rewired all the wires from the original 2PDT to a brand new 2DPT, the « silent wah » issue was still here (so i could tell that the old 2pdt is not the culprit).

- In order to make some tests, i then made different wirings on the wah’s 2PDT. With one of the wiring, i could get a decent volume out of the wah, and i could hear that the « wah pot » works fine, so it’s not the cause either.

- I investigated further, thinking that it might be a faulty transistor or an ageing capacitor… I changed again the 2PDT wiring : there, i managed to get both the fuzz and the wah working altogether at a decent volume… So, it seems that the silent wah issue is not a faulty component on the PCB (at least to my small knowledge), but i suspect it to be related to the wiring between the PCB, the wah 2PDT, the Fuzz 2PDT and the jacks… Could it be that, depending on both 2pdt position, the sound goes to the ground instead of going to the output ?

I am going to make wiring schematics and more detailled informations about the wiring i did, i will post it a bit later today.
Top

This is a first layout, i hope it can be useful (i didn't draw the whole schematic of course) : 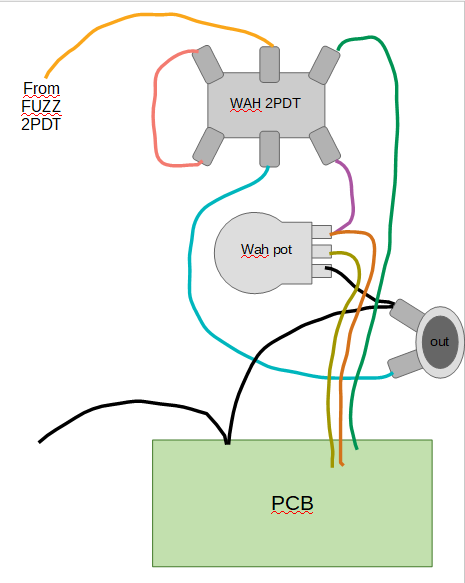 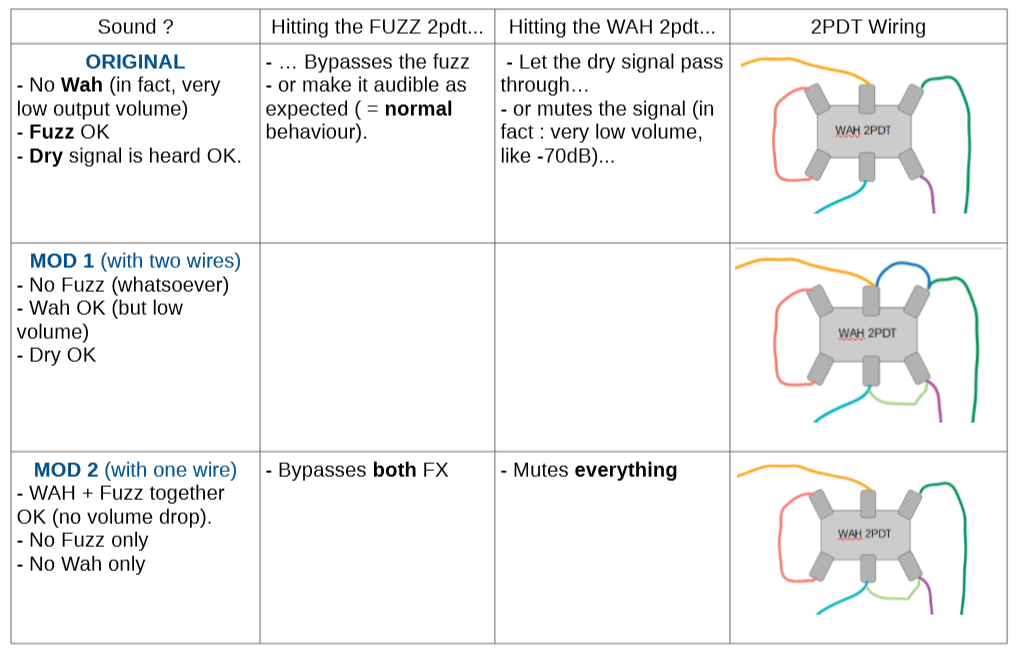 Ok,so, to me :
- yellow wire on top : input signal coming from the fuzz section;
- blue wire below : output signal (going to the output jack tip);
- orange wire on the left : let the signal pass without reaching the wah (= "bypass" position for the switch);
- green : go to the wah circuit (pcb);
- purple : go the wah pot...

First, i added two wires, in an attempt to connect the input (from the fuzz) to the "wah pot". The result was unexpected : no more fuzz at all, but the wah was rather ok (with a slight volume drop, but nothing as low as previously), and the dry signal was ok too.
Then, i removed one wire, and this time i could hear the combined effect of both fuzz and wah at a rather ok volume (and it sounds nice !).

What i would like to get is : no huge volume drop from the wah, and being able to bypass each effect independently (as expected).
Top

I don't have the schematics, but i have drawn the wiring, if it can be useful to anyone... and if it can help finding anything in my case 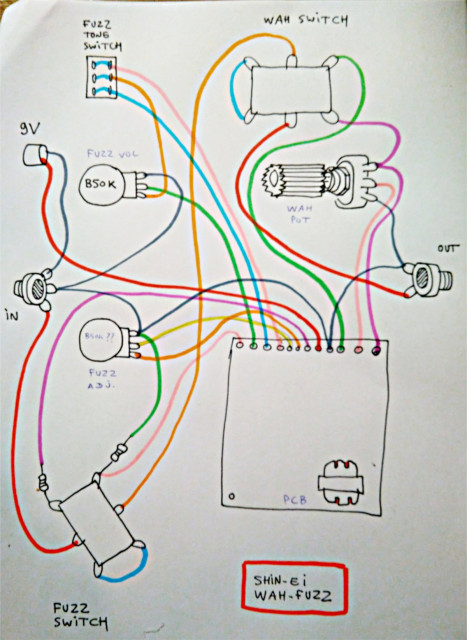 I processed further testing, recorded a few clips and made some measurements :

So, there is a quite big volume drop with the wah alone, and a huge signal drop when playing wah+fuzz altogether, reaching barely audible levels.
(all the tests were made with the original 2PDT wiring)

Any idea what could be the cause ? A faulty component ? A bad wiring ?

Hello,
Just for information (if anyone experience the same with its pedal) :I (nearly) finished to repair my Shin-Ei Wah Fuzz (8 tr).
What i had to do :
- Change the switches (one switch was causing intermittent contact);
- Check the switches wiring (one switch was badly wired, so, as both switches are wired in series, this is why i had no sound at all in one position). My unit must have been "esrviced" previously, and left with a wrong wiring...
- Change the jack sockets (one was making very bad contact).
- Check the sockets wiring (again, one jack socket was wired the wrong way, with the tip wired to the sleeve wire !


All is left now is changing one transistor which doesn't seem to "hold" the volume properly (sometimes the sound is loud, sometimes it fades away, sometimes it is a bit low). When i touch it with my finger, the volume comes back instantly : it might be either a bad/old soldering to reflow, or a dead transistor (or something else, i'll investigate further).
By the way, on my version, the transistors are 2SC536 (while most schematics list 2SC828).


All in all, it is a very nice instrument : I like the sound of the fuzz a lot (and, with proper servicing, the output volume is loud enough !), and the way on top of it allows for nice sound shaping