Bernardduur posted a schematic of the OTA SP in question above. Isn't the Low Frequency Compressor the same as the Black Finger?
GuitarlCarl - "TGP = The Gear Polishers"

The low frequency compressor uses and 10k resistor and and a 1uf cap to ground as a low pass filter there was two versions of it one was an ota the other which i like better used a transistor for attenuation. The blackfinger only came out in a out please correct me if iam wrong. as far as i understand and doesn't employ a low pass filter as the output of the ota heads straight in to the tone control. Hope that helps anyways.
What's the best thing about fat chicks and scooters? There both fun to ride around until your mates find out!
Top

Searched for this, but there doesn't seem to be a thread. Apologies if there is!! Just wondering if anyone has one of these or has built one? I'm looking at building a compressor with the parts that i have and this one seems mighty nice. The schematic is all over the web, and there's two drawings of it:

It seems that Drawing 2 at schematics.ca has been removed. Has anyone got a copy handy, perchance?

I've actually built a Soul Preacher compressor using schematics I found on the internet, one thing I did notice is that although my build worked well when first built, it had a couple of issues, firstly the sensitivity would slowly reduce till I couldn't tell whether it was doing any compressing, secondly the circuit had a nasty habit of suddenly saturating with gain and distorting, I also found that my build was very picky with the type of FET used, some FETs worked reasonably well while others didn't....

All in all, I think that the Soul Preacher is a bit of a finicky circuit to build and get going right.....

The schematics in this thread seemed to be all for the bigger Soul Preacher Vintage. I bought the Soul Preacher Nano (SMC board), and I would really love to get to see the schematic. Any hints?

The Nano is actually very good on the bass. There is a trimmer inside that can be adjusted to ease on the squish somewhat, and it made the pedal from overboard to very usable. Had my first gig with it last night. It's a keeper.

One peculiar issue is that if I power it from a splitter cable, whenever I connect the same power to another pedal that connects the power minus to signal ground, the signal output of the Soul Preacher Nano increases significantly. I think the compressor also squishes more that way. What I did as a quick fix was to connect the power minus connector to ground internally, and adjust the trimmer again.

If the schematic would allow, I would like to try a pot for the attack settings, and increase the range to even longer attack. I only use the long setting.
Top

I love these old PCBs with the curvy conductor strips, so I made this PCB clone. 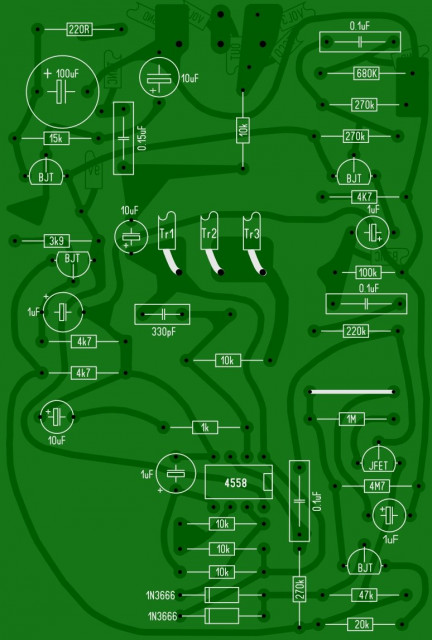 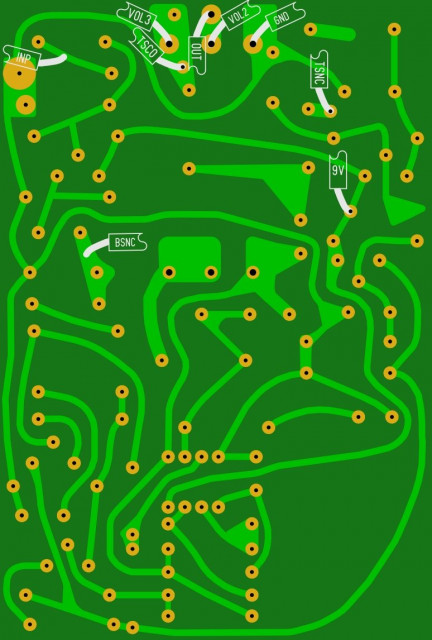 I noticed that one of these schematics has some glaring mistakes in it. It is the one called "electroharmonix soul preacher.gif"
Specifically it shows the cathodes of the two rectifier diodes connected together (which they aren't) and also it shows the second opamp (the one associated with the rectifiers) being fed from the ac side of the 10uF dc blocking cap at the output of the first opamp. It should be connected directly to the output (pin 1) of the first opamp, so that it can get the dc bias from the first opamp.

Hope that all makes sense!!!!