Discussion regarding early stompbox technology: 1960-1975 Please keep discussion focused and contribute what info you have...
Post Reply
11 posts • Page 1 of 1

Old and Rare.
Some parts are not known but I have worked out good estimates.
The filters (C6 and C8) were matched by using the sound samples. 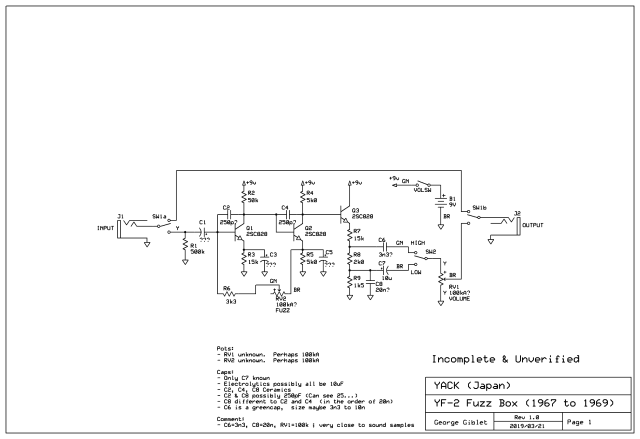 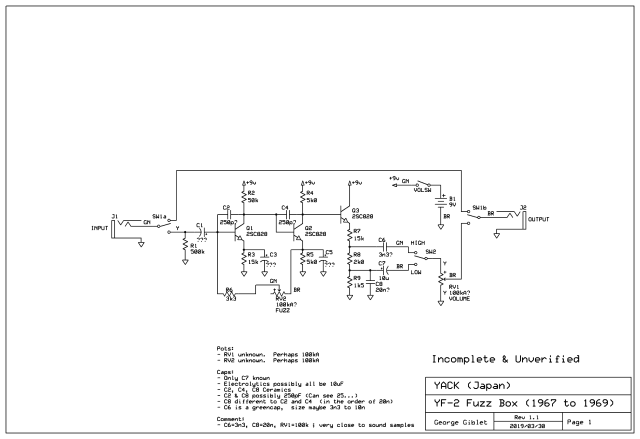 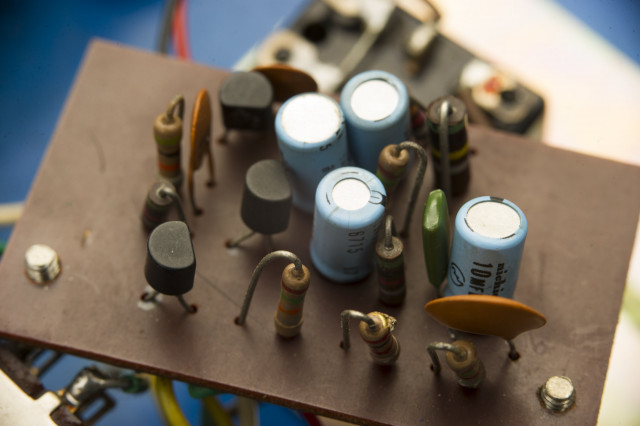 It's a valid question. I did put some thought into it even though it may be wrong.

The 1967 was based on the electrolytic caps (early 1967). The range was something I found on the internet so it's an unofficial range.

So putting that loose info together I thought the 1967 to 1969 range from the internet was believable.
Given the rareness of the Yack pedals it's going to be had to get enough samples to improve the answer.
Top

not much info at
http://www.effectsdatabase.com/model/yack/da1#pictures

From the outside that's it. They follow the wedge style enclosure from that era. Inside they are quite different.

The Tack YF-2 is unique, other than the similarities to the Fuzz-Face type ckt.

The Yack DA-1 is very similar to the Ace-Tone FM-1 but it's not a direct copy even though the PCB looks identical.
The DA-1 and FM-1 both use a similar ckt to the Maestro FZ-1. This group are all 3V units.

Analog guru did a partial schematic in 2007 for the Ace-Tone FM-1. The schematic has a few bugs, not because of tracing issues but because he had limited pics to work from - that's life tracing from pics. I've been able to gather a little more info but still not enough to create a complete schematic. I'll put up what I have when I have more time.

Yes, until the internet I didn't realize there we so many from the 60's. Sometimes I don't like the sound 'out of the box' but they can be tweaked. LucifersTrip has done quite a bit of tweaking.


not much info at
http://www.effectsdatabase.com/model/yack/da1#pictures

For some units there very little info.

I like the idea of documenting what these things actually were. It takes actually takes quite a bit of work. Without all the people on internet pitching in with snippets of info it would be an impossible task.
Top

Very interesting, there's also a YF-1. It doesn't have a switch.

It uses the YF-2 PCB. Clearly some parts for the switch are not loaded on the YF-1.

the one with a switch

yeh, the interweb allows folks from around the world to come together for a chance of fuzz

You never know! We know what to look for now.
There's no way I would have recognized the YF-1 without having looked at the YF-2.
Top
Post Reply
11 posts • Page 1 of 1