by Fastnet
Morning all,
Seen this tread has become active again...
All is well with my build so many thanks again to all who made it happen.

Kind regards to all as usual,
J. 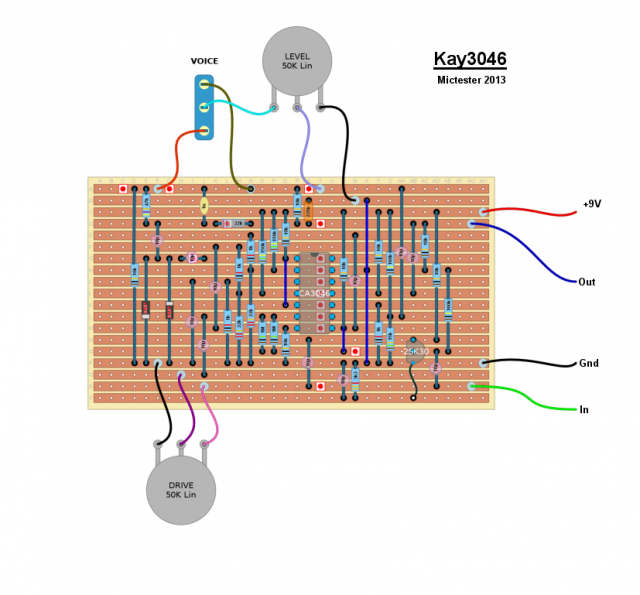 Sounds great! This has persuaded me to design a PCB for it!

by mictester
As promised: The PCB. Built three of these in the last few days, and they sound really great. It's worth choosing the 150k and 22k bias resistors for the long-tailed pair. I found a pair of 148k7 for the first one, another had a pair of 151k and so on. If you have a bag of (say) 20 resistors, you should be able to find two that are identical. It really is worth the effort - the better balanced the transistors are, the more doubling you'll hear! 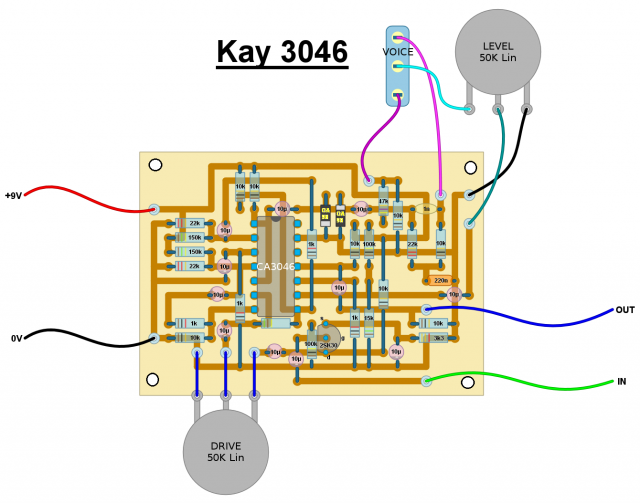 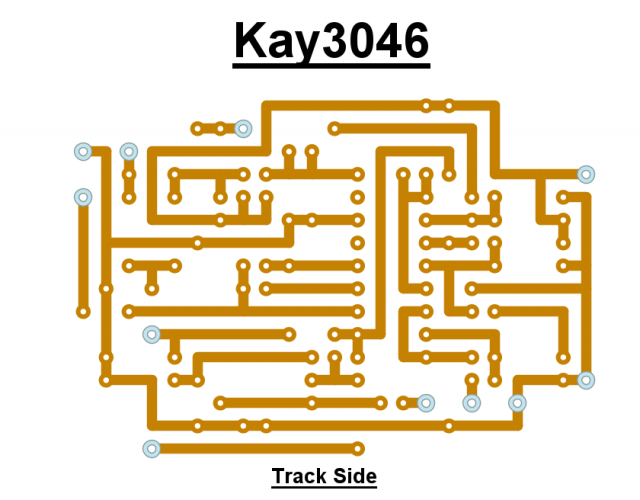 This pedal sips current from a 9V battery, and really does sound great. If GGG or GuitarPCB want to make this board, please go ahead. It works and sounds great!

by mictester
One thing I forgot - use any Germanium diodes (or the base-emitter junction of a low gain germanium transistor). If you want a louder, more aggressive sound, use Schottky or silicon diodes. Silicon will be outrageously loud, and will cause the last stage to distort too, which (to my ears) sounds horrible, but you can try it if you want.

This pedal really cuts through in a band situation, and it has some great sounds available!

by Chugs
Looks cool Mictester. I have played around a bit with the Kay circuit myself. Do you have a schematic of your version?

by Mbas974
Michester,
from your experience what is the best MOD to get the U2-Elevetion sound with this new circuit ?
The voice switch is supposed to be the hot potz ...is it right ?
Schematic wil be appreciate as well tx

Although he's famous for exotic and rare pieces of kit, I've read that he was first introduced to the Kay by Danny Lanois and the rest as they say is history!
So for that reason, I would have thought that Edge's unit was just "reinforced" to stand up to the rigors of touring and therefore assume that his would be true to the original... my build sounds very close but you can't ignore that some processing will have been added during the mixing and mastering of the studio take.
Have a look at this, it might point you in the right direction...
[youtube]https://www.youtube.com/watch?v=eeupLXuo ... DbwixHCd7A[/youtube]

Do fancy following the latest rendition by Mictester when I get time... thanks for some late nights of frustration in advance!

What I was asking is a "smart/fast way" to get close to... with the new Op-amp circuit.
But since I can't get the replay, I will test it on board by myself.

by Fastnet
No trouble fella,
Keep us posted with the results...

The travel of the threadle in the Kay is very minimal. It only uses 50k of the 250k potmeter, the restant (200k) is left to ground as drawn in the schematic.

still gates a little bit but no where near as much. pretty cool effect.

by johnk
I uilt mictester's CA3046 version. shoukld I assume that the unmarked resistor directly below the CA3046 is a 510K as shown by the color bands?.

by francis1978
I hope this thread is still open,

by Mbas974
If you are attemping to reach The edge tone better using 2SC945 (as the original unit use...),
but you should reach a good fuzz too using any other TRX.

by francis1978
First thing first, sorry for the typos.. it was late when I wrote the message and was unable to recall it to edit.

by Fastnet
Just a little update, finally sat down and swopped out the germaniums for some 1N4148's and it is outrageously loud!
It pushes my VOX much harder and doesn't loose that much of the octave either which I was quite surprised about... cant say what sounds better just a very handy boost which has made this less of a one trick pony as I'm using it for some solo's as well.