Actually it's not considered to have been a prototype.
Top

How do you achieve something that good with diylayout creator?? If it's not a stripboard, vero, or pcb layout it's a right bastard to use.

phibes wrote:Paco, who did the refab board in the very top picture?

That's Stuart Castledine's work. http://www.wah-wah.co.uk
Brad/Creepy Fingers built me a mean clone! "Thin whine" is a good description. lol. I really dig the wah tones Page got and I believe The Pretty Things used one on the S.F. Sorrow album.

Another cool renovation by Mr Castledine:

http://stompboxes.co.uk/forum/viewtopic ... &start=660
Yet to break through the Space Charge
Top

How do you achieve something that good with diylayout creator?? If it's not a stripboard, vero, or pcb layout it's a right bastard to use.

We call it talent in poland

I'm kidding, that was simple really, specially if you compare it to tagboarded Centaur

I'm glad you like it. I can post the same thing but with one extra resistor, with part values close to McCoy if you're fancy?
Top

I'm putting a fiver down that you finish finish the Centaur!
GuitarlCarl - "TGP = The Gear Polishers"

phibes wrote:I'm putting a fiver down that you finish finish the Centaur!

You putting what matey?

You know that my English is only limited to trow the fucks all around, I'm not get it

Five dollars. Which really isn't worth much outside the U.S. these days so looks like your getting shafted.....
GuitarlCarl - "TGP = The Gear Polishers"

For five bucks I can get one Riken resistor, but still I'll be short for shipping

Thanks buddy - this is really great!

So Phibes is betting on you finishing the P2P Centaur man - when I look at that scary thing I think he would lose his 5 bucks!!!

Yet to break through the Space Charge
Top

sooner or later I'll get my fiver

Hi Dan N,
I was wondering what you meant by "brown TDK" as in (TDK) part.

K1RKYD
I stepped up on the platform; a man gave me the news; he said "You must be joking son, where did you get those shoes?"
Top

Here you have infamous TDK inductoe

That is most certainly the infamous TDK inductor, but I'm talking about these guys from rhythm machines. 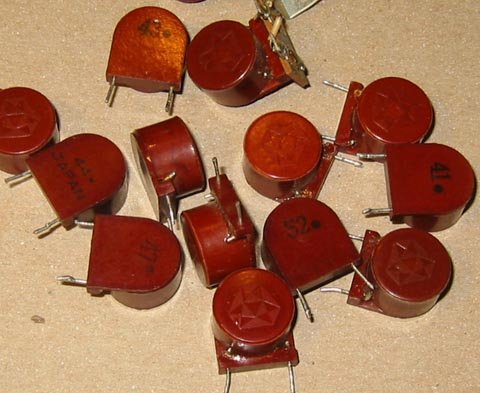 Hey there everyone,
I just want to inform you that i bought some inductors from the thomas organ factory which i had seen in a mister crybaby!
Unfortunately i have found that these inductors havn't worked for me. At least something good came from this because now we have the knowledge that this 250uH inductor from this comapny dont work.

Thanks again for the information anyway though.

K1RKYD
I stepped up on the platform; a man gave me the news; he said "You must be joking son, where did you get those shoes?"
Top

After a while I see it's not so correct. One resistor value is wrong. Since I've lost all my data after OS crash, I did the layout from basics. For McCoy, and others go here
Top


...now... I wonder what value of resistor connected to 4uF BP is in the JMI Reissue?

Fuck! correction... It looks like RG's schemo is wrong, and 100k resistor is what is it in it. Checked all the gudshots I have and in all I see 100k's

So ones again, new layout

plus some of the picts of mine - in progress but soon to be finished. Grey painted enclosure is being made, new 0,22uf 160v caps will be here soon as well (the ones I have, made by the same company is 400v, and physically larger, tooooo large). I decide to use metal film dale's ccf60 series - I love those resistors!! Insteed of styroflex 0,01's I'm going to use Eromark's, no idea what kind of caps are they, but they sound lush, and physically are fine, I'm getting low with those

I'm still not sure what to do with the inductor... I'm talking with whipple, but he asking $75 for the close replica.. I thing I'll use regular 500mH whipple at the end of the day...
Top

BTW - mods, is this shouldn't be in ready to build section?
Top
Post Reply
100 posts