Tube or solid-state, this section goes to eleven!
Post Reply
13 posts • Page 1 of 1

Does anyone know anything about this one? I found no working links in my search for answers, just a lot of 404's

EDIT: The PDF contains description and pictures as well as schematic and pcb + layout.

I think I once saw a vero layout for this one.

musikding.de sells a kit, maybe they could offer the pcb separately.
Layouts
Top

I like that gain control. it's like a bright cap for an op amp gain stage.
"You've converted me to Cubic thinking. Where do I sign up for the newsletter? I need to learn more about how I can break free from ONEism Death Math." - Soulsonic

Awesome, I could never find the full PDF for this thing.

azrael wrote:Awesome, I could never find the full PDF for this thing.

redoing a layout for this and have a question.
I have little to no theory kung fu so please bear with my stoopid question, but am I right in assuming this thing is effectively a preamp section going to an amp section? if so, could I make it modular so as to potentially segregate a preamp board from an amnp board?
reason being, I have bought a kitset 10W amp off ebay and it'd be nice to be able to chuck the preamp into the 10W amp..

so is this as simple as I'm making out or am I dreaming?

my thoughts are the preamp ends here (as per attached pic). 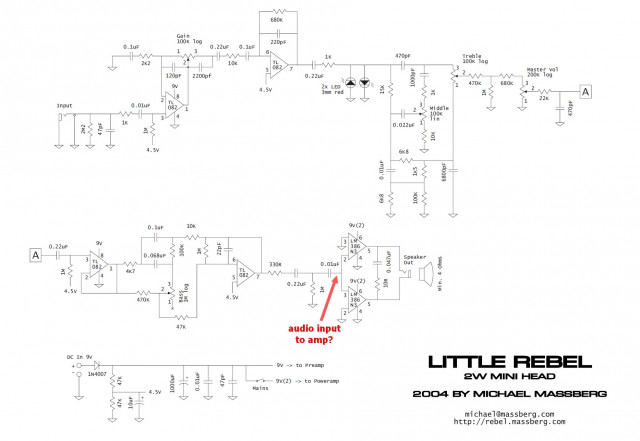 Just move your red arrow one step to the left: the node previous to that 10nF cap can be assumed as a valid output.

Keep us posted about what happens with this preamp driving a 10 watt amp.

okay, so I built it and got nothing.. no sound at all..
so am glad that I made the preamp and power amp modular.. easier to troubleshoot.

the lm386 in the power amp are both getting pretty hot.. not melting yet, but I've not left it on very long cos I think they will if I leave it too long..

so, I disconnected the power amp and put the preamp into my ruby. I got a farty sound and only on full gain..
audio trace got it to the first opamp with good signal as far as pin6
as of pin 7 it was the awful farty sound.. kind of like a badly biased fet.. so I pulled out the LEDs and boom.. works awesome..
so a) do I need the LEDs in there (remembering I have zero theory knowledge so if they're vital, then .. um..

)
and b) why would the LEDs cause an issue?
I noted that whilst they're both 3mm red LED, one is physically slightly larger than the other (maybe 0.5mm? but still nowhere near a 5mm LED).

oh.. and layout and PCB below if anyone wants it, but bear in mind the power amp is as yet unverified. 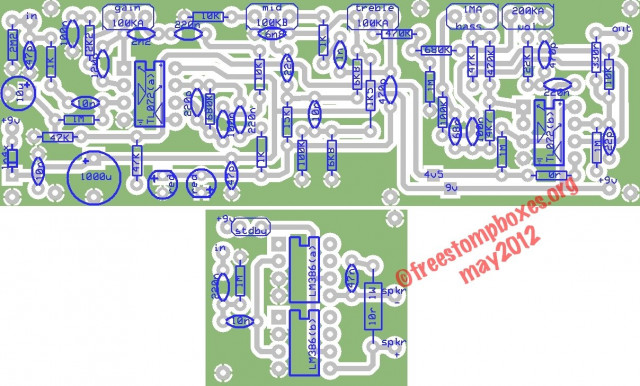 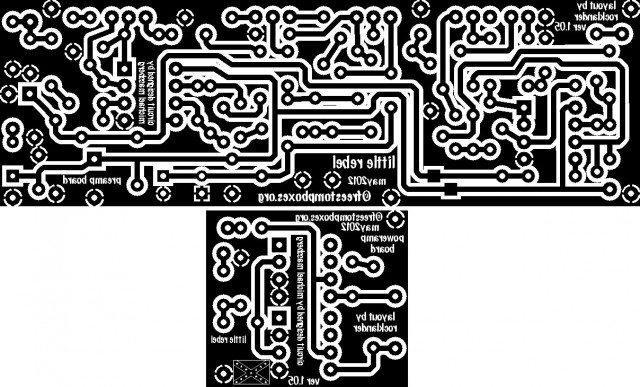 Perhaps these leds may be burned, shorted, or damaged in any way causing the awful sound you describe.

Try use a couple of brand new red leds to place in the circuit unless you need a completely clean preamp to play a bass.

About the LM386: you have that temperature issue also without speaker connected ?

The LEDs clip the signal. Yes they are vital for "gainy" tones but one man's high gain-ish great distortion is another's awful farting buzz.

How far can you actually trace signal? Post tone stack? Post master volume? Perhaps as far as the input pins of the LM386s...?

The preamp was - if I remember right - almost a driect copy of a Marshall Guv'nor pedal, or at least some of those Marshall pedals.

The bridged LM386 power amp won't probably be the most reliable circuit.
Top

thanks guys...
removing the LEDs completely gave me a much more usable (IMO) cct so I'm happy without them. I'd like to be able to plug my acoustic guitar in too (it's just a practice amp, not a gigging one) so cleaner the better for me.
once they're gone the signal goes all the way through fine, and in fact still gets quite overdrivey as I push up the first gain pot.

I didn't try the poweramp section without the speaker, but in the meantime a kit I ordered off ebay for a 10W (tda2030) arrived and I soldered that up (man, kits are SO much faster than etch-your-own

- was done in like 20 mins) and plugged it in.. it wants 12VD but I just grabbed the 9V from the preamp rail for testing and it seems pretty good.. as I turn it up it starts disappearing in volume, but I can't help but wonder if that's due to lack of volts.. next step is to whip up a couple of 7809 and 7812 on a board with some filter caps so I can feed each board the right power from a spare laptop PSU

They have the schematic, layout, pcb, people saying works great, people having issues....but what i have failed to find are clips on if this thing is even worth the time to build! Has anyone built this? Does anyone have any clips t provide or link??

Thanks in advance.
Top

I would use a separate cap to each LM386, at minimum. All you'd need is a slight DC offset in one of them to waste a bunch of power as heat.