For quite some time now, we are flooded with spam. This time it seems to be generated by old accounts, probably using common and/or compromised credentials to login on FSB.
We'll go through the security checklist and, at some time, we'll probably need to force reactivation for the spamming accounts, at the very least. So, please, if you're using a username to login, note down the e-mail address associated with your FSB account, because it will be needed.

Original effects with schematics, layouts and instructions, freely contributed by members or found in publications. Cannot be used for commercial purposes without the consent of the owners of the copyright.
Post Reply
87 posts

After breadboarding several BTDR-based reverbs (the BYOC 2-knob, the GGG D-Verb, and the Box of Hall), I combined all the bits that I liked from each of these circuits and made a few tweaks to fit my taste. A few people have asked me about it, so I figured there's enough interest in this variation to post it here. In honor of the circuits I blatantly ripped off, I call it the All-Star Reverb. 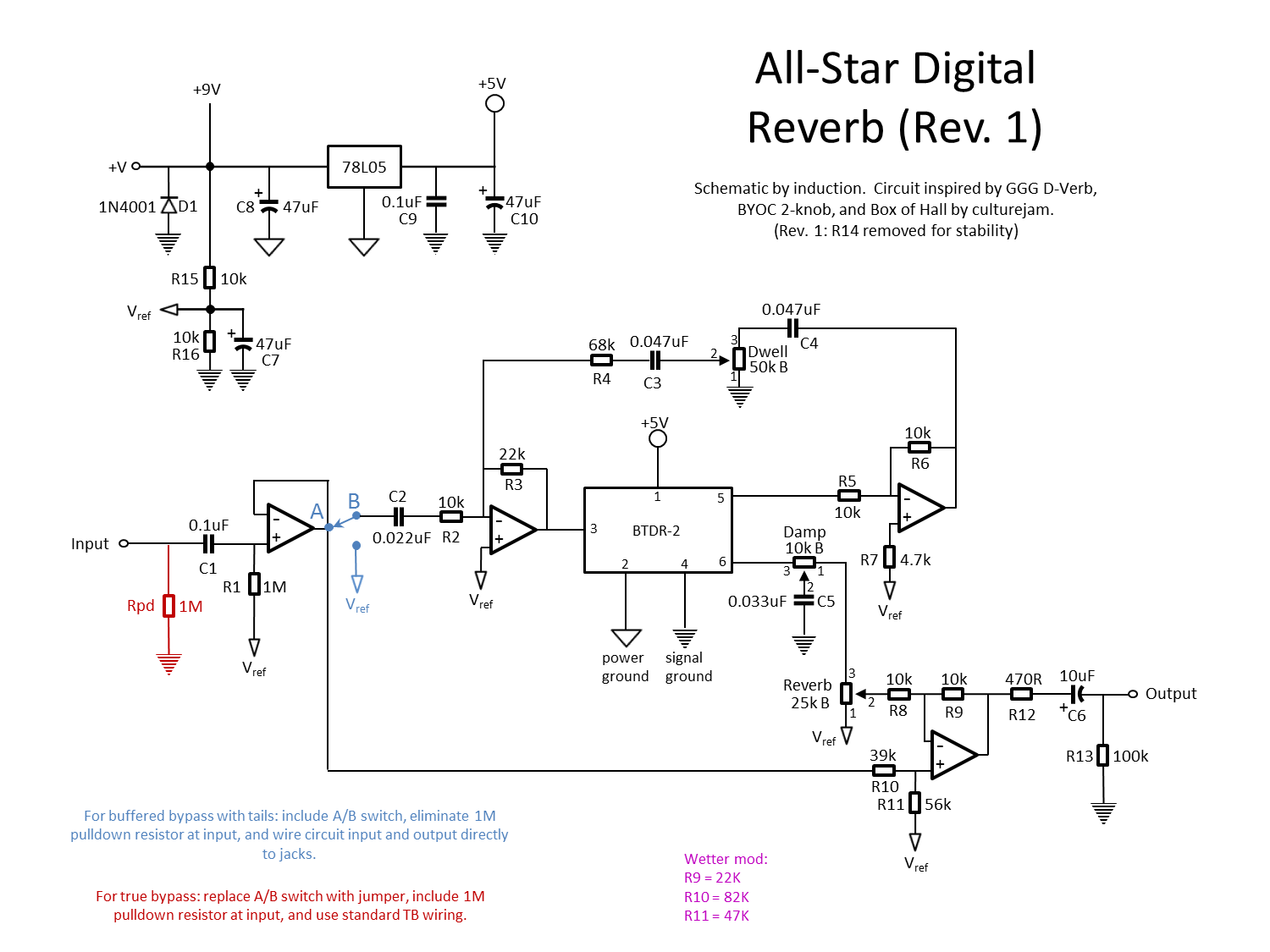 The attachment All_Star_vero.png is no longer available
The dwell circuit is modified version of the BYOC dwell circuit, but it takes the output directly from the brick instead of from the reverb pot. This decouples the reverb control from the dwell control, allowing you to crank the dwell at low reverb levels, adding some versatility. The gain of the dwell op-amp is also modified: it goes as high as possible without oscillating. Finally, the dwell path gets its own output from the brick, instead of being split off of the output path. Unlike some of the other dwell controls (Ghost Echo, Tenebrion) the dwell path diverts before the differential amplifier stage that combines the wet and dry signals. Thus the dwell path has no dry signal in it. I find that purely wet dwell paths have a very different character than combined wet/dry dwell paths. Wet-only dwell sounds more ambient and effect-like, and extends the decay time considerably without increasing the perceived size of the room. Mixed dwell paths seem to mostly make the reverb louder. They increase the perceived size of the room, and I find they sound more jumbled and less focused, but more realistic. Both sounds are valid, but I prefer the wet-only dwell because it gives a useful sound that isn't available from the mixed-dwell circuits. The sound is more artificial, but if you want realistic spring reverb you just turn the dwell control to zero.

The damp control is modified ever-so-slightly from the box of hall. It affects the output path only, not the dwell path, so it is fed by only one of the brick outputs instead of both of them. The result is nearly identical at minimum damping, but gives around twice the treble roll-off at maximum damping. When I breadboarded the box of hall, I wasn't sure I needed a damp control. The more I used it, the more obvious it became that the damp control was essential. Reducing treble from the reverb signal is a brilliant way of adding depth and space without calling attention to the reverb. Like a good compressor, you might not even realize it's turned on, but you definitely notice if you turn it off. Brighter sounds are also useful, but are more noticeable as an effect.

The gains of the last op-amp stage were chosen by trial-and-error. I initially chose gains that gave unity to both the wet and dry signal, and found that the dry signal was above unity. So I aimed at a slight gain reduction for the dry signal and got unity. I don't understand why the gains came out wrong, but I accept it. I suggest you breadboard it first, just to be sure.

I built mine with buffered bypass and tails. The layout will accomodate true bypass if you prefer, or you can add a true bypass/tails switch if you want both. 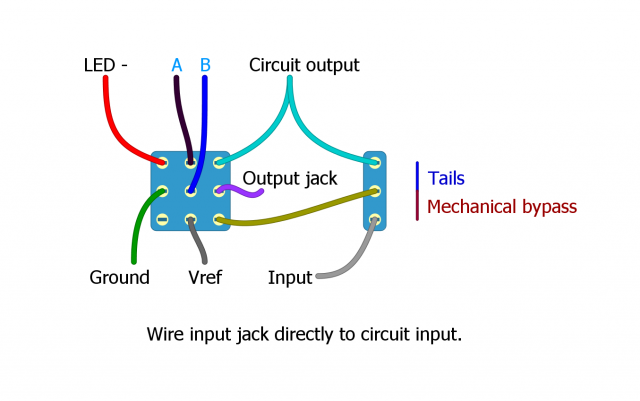 In the vero layout, the brick (BTDR-2H) is mounted directly to the board, and sits underneath it. This reduces the number of brick connection wires from six to two and prevents you from having a free-floating brick flopping around in your pedal, but it also means that the brick should only be soldered in when you're sure the rest of the components are correctly in place. You may want to use temporary wires to test the circuit before you mount the brick permanently to the board.

The only down-side I've found is that the circuit doesn't behave well after my amp. I run a Vox AC4TV through a resistive dummy load/line out box, into a LM386-based power amp with an input buffer (like a ruby, but without the bass attenuation), and into a 12" cabinet. I like to set the Vox to edge-of-breakup or higher, and would prefer to put the reverb between the Vox and the power amp, but when I do this the reverb has a strange ascending pitch as it decays. (Maybe I should try buffering Vref?) It behaves normally in front of the amp, but I'd prefer to put it after.

I used a medium brick in my build.

Anyway, I hope someone finds it useful. Sorry about the blurry photos. Comments and suggestions are welcome. 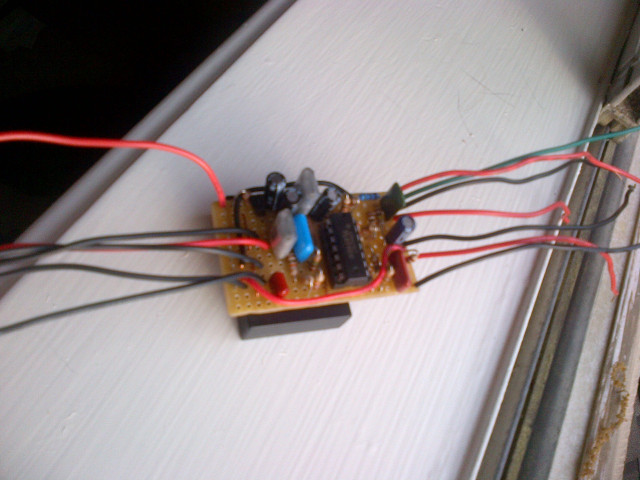 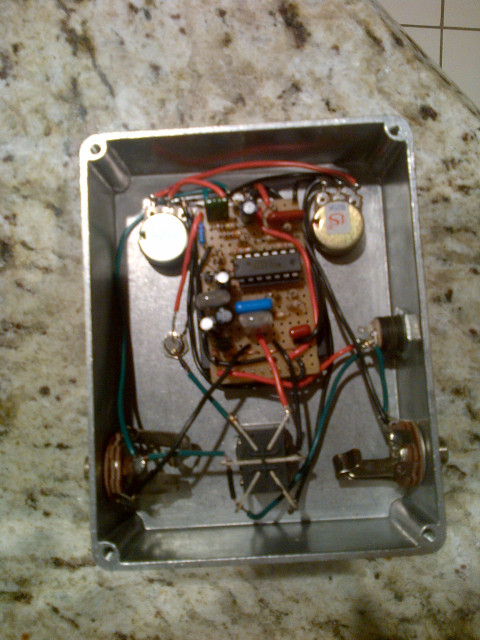 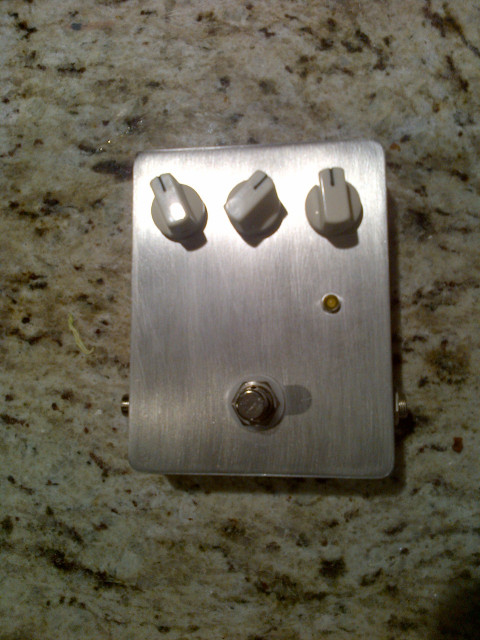 thanks for sharing yr (re)design with us induction. i especially liked the explanations that you gave for the reasoning behind yr adjustments.
"..the finished product is just the garbage left over from the work." R.G. Keen
Top

Thanks for posting this, would love to hear it.

ch1naski wrote:Thanks for posting this, would love to hear it.

I twist the knobs around (very unsystematically) a lot to sample as much of the parameter space as possible. I recorded it late at night at a fairly low volume (sleeping 6-week-old in the house), but it should give you the general idea.
Top

Built this up and no joy. Will have to debug when the weather isnt so warm making me hot and bothered.
grumble etc.
Top

Did you build it on vero or breadboard? Let me know if I can help, or if anything in the layout is unclear.
Top

induction wrote:Did you build it on vero or breadboard? Let me know if I can help, or if anything in the layout is unclear.

Vero. Pretty sure I did it right.
I just get my clean sound through.

Should all the grounds be tied together, or separate ground and audio ground?
Top

I have the power ground and the signal ground separate.

Did you do true bypass or buffered?

Someone else has told me that his build didn't work until he replaced the 100R with a jumper. I don't understand why that made a difference, and I used the 100R with no problem, but it's something to try.

Feel free to post some pictures and I'll take a look.
Top

Yep, that was me. Been dragging my feet on getting a modified layout with predelay control a la ghost echo. Still messing with blend option of wet and dry signal. Anyway, when I had the 100ohm in there everything was good (regulator was giving m 5v, tl074 was getting 9v, etc...)and then the voltages would drop as soon as I would connect powwer to the brick. I thought I had fried the brick. Got another one, same problem. On a whim bridged the 100ohm and everyhting fired up. I am using the big regulators as opposed to the small ones. Work and kids eating up free time at the moment, gonna get it posted this weekend though.
Top

There controls all seem to work and I can hear the reverb but its very low..
Top

Is there a reason you can't edit a post after a while?

I still have the 100R bypassed, however.

At Beedoola's request, I've modified the circuit to double the amount of wet signal available. It's a simple mod (3 resistors), and it doesn't change the dry level. I haven't tried it myself, but I'm told it works well.

All_Star_even_wetter_vero.png
Explanation for those who are interested: I modified the gain structure of the final op-amp stage (differential amplifier) which sets the gain of the wet and dry signals. This seemed like a better idea than increasing the gain of the inverting amplifier feeding the brick because it won't overdrive the brick and won't cause self-oscillation at high dwell settings.
Top

Yesterday my All-Star turned into a wind machine: no dry signal, no wet signal, just white noise. Since Destro told me that his circuit wouldn't work until he removed R14, I tried jumpering around R14, and that solved the problem instantly. R14 was included to reduce power supply noise because I was not using true bypass, but it seems to make the circuit unstable. I have no idea why the problem took so long to show up on my build, but I have removed it now, and find no increased hiss in bypass or effected signal. If you have built the circuit or plan to, I recommend you remove this resistor. I have taken down the old schematic and layouts, please use these instead.

Do you have a schematic for the resistive load you use in your AC4?
Top 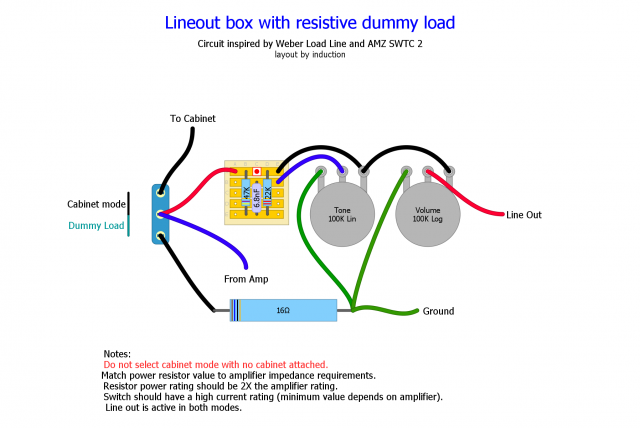 I used a 25 watt power resistor for the dummy load.
Top

Freppo rightly pointed out that when I removed the power filter resistor, I forgot to remove the cut from the track side of the layout. Here are the corrected veros. 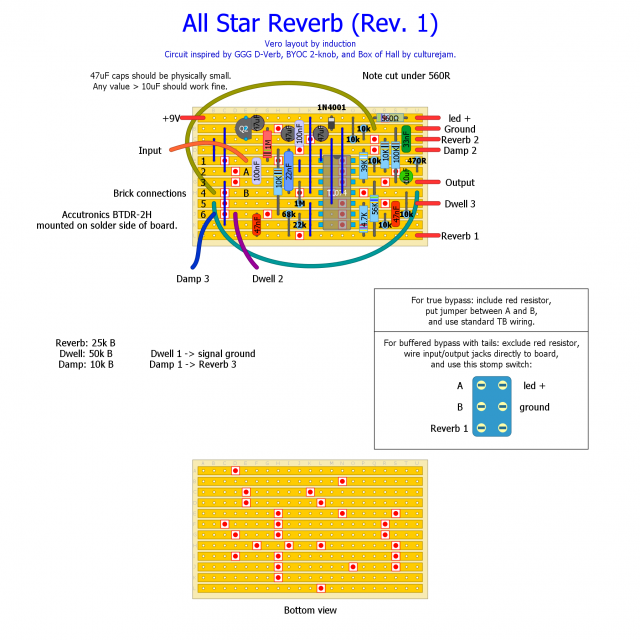 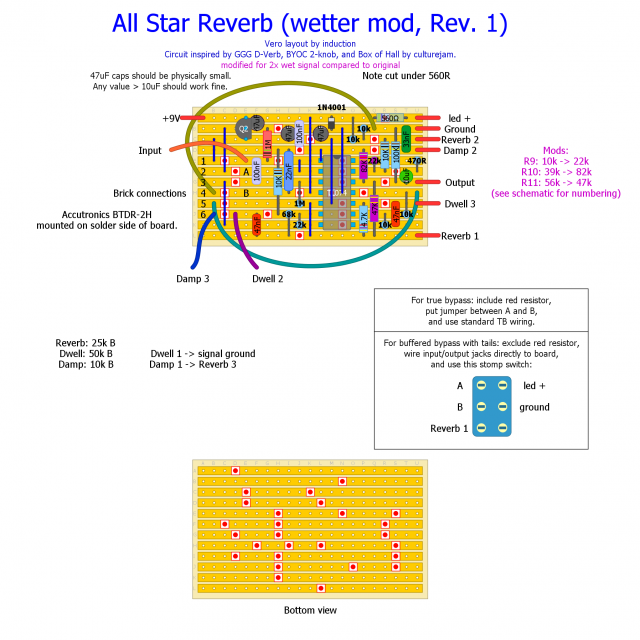 Accidentally deleted the schematic instead of the layout. Here it is again. 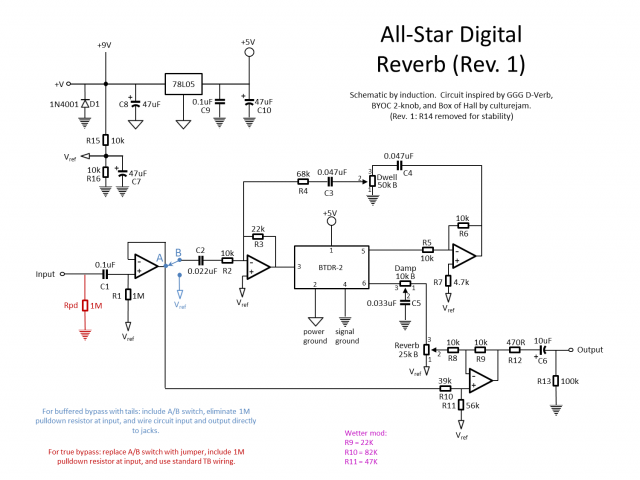