bajaman wrote:
where did you find them

All of them from ebay.
Top

silly me - never thought to look there

Does anyone have a schematic of the Fodera Model 2000 Preamp ?
Top

It does appear to be very similar to the MIJ Precision Lite preamp in many respects.
i have an smd board layout (single sided

) ready to publish, but just awaiting the missing values.
i simulated my guess last night - the treble boost frequency is VERY helpful - I already knew the mid and bass turnovers and they are exactly what you have provided in your post.
The input stage gain eludes me at present

, but it does not seem to be that important - some of the pictures posted earlier from Ebay actually show this stage as a unity gain buffer

More very soon
thanks for any help to come

I think that SMD pcb is more universal: it can be unit gain or as a gain stage, eq section can be peaking or shelving. Depend on how to populate the PCB. That shows pictures from ebay. Something similar can be found on circuits for Carvin onboard bass preamps, some bass and treble there are set as shelving and some as peaking. And in fact I do not really use bass and treble (well sometimes I do roll off treble) but do really like to play with midrange control and I use ampeg cloned inductor with 5 position switch which gives me plenty of different colour sound to my bass. Would really like to get ampeg PF500 preamp schematic to clone it and simplify to build it as onboard preamp.
Top

If I may be so bold, where did you get the turnover frequency information from and how accurate is it ?
(PM or email me if you want to keep your source confidential

).
Although lietuvis' pictures are very helpful, it is almost impossible to read the smd resistor values, but many of them appear to be the same as the MIJ lite schematic published a few pages back in this thread.
If your turnover frequencies are correct, then it will not be too hard for me to work out the correct component values, then I will publish the schematic AND single sided SMD board layout for all our members enjoyment.
Why do people insist on double sided board layouts for such a simple baxandall active tone control

Dave's repair shop. They gave me the information. I must note however that he told me that some of the fender 3 band use 12khz, but most common is the 8khz. This forum has helped me so i try to give back when i can. You seem to really know what you are doing, keep up the great work and thank you....

You are correct. Single sided board is fine for the Baxandall 3 band eq.
Top

This forum has helped me so i try to give back when i can.

Fender American Standard Jazz Bass
Here is my best guess simulation schematic based on one of the images (the one showing a gain stage before the active tone control).
It's getting late at night (early morning here in NZ) so this is all I am going to post at present - more tomorrow 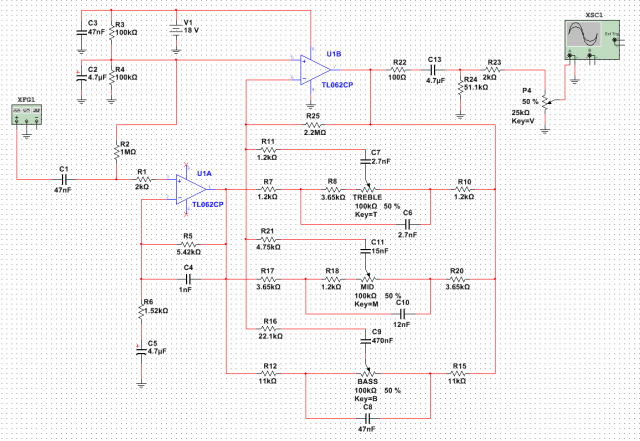 All i can say Bajaman is " You Rock" I will breadboard it up tonight when i get home. Thanks

bajaman wrote:Fender American Standard Jazz Bass
Here is my best guess simulation schematic based on one of the images (the one showing a gain stage before the active tone control).
It's getting late at night (early morning here in NZ) so this is all I am going to post at present - more tomorrow

Hi Baja you added R25 to circuit as 2M2 but I think there is C12-220P instead and also C4-1n looks too large to me, will it cut most of high frequencies in gain stage?( I might be wrong)
Thanks for all your effort to trace the circuit

There are several different versions of this circuit board - some have a unity buffer stage first, BUT the one I traced has the gain stage with the relatively large hf rolloff capacitor C4 fitted.
Without this 1n capacitor the hiss would be very annoying at full treble boost

The Fender American Deluxe bass PDF circuit board image shows R25 and C12 even though only one of these components is fitted. On the board which I traced only C12 is marked on the silkscreen, BUT if you look at what is fitted it is clearly NOT a capacitor but a 2.2M resistor.
The inclusion of C9 (470n or 0.47u electro) on the circuit means there is now no direct DC path from the second stage op amp output to the inverting input - this is WHY C12 is replaced by R25, a 2.2M ohm resistor

With the gain stage resistor and capacitor values AND with all the tone controls set to mid way, the frequency response is -3dB down at approx 23Hz and 30KHz - it has a stage gain of 6.6dB (or x4.62 AC voltage gain)

The pictures of the Fender preamp which you can purchase for US$60 on ebay is NOT this circuit - it has a buffer and several different value resistors fitted in the tone control section - it does NOT have the 470n capacitor fitted to the wiper of the bass control pot AND it has the C12 220p capacitor fitted instead of the 2.2M resistor

Back to the Fender American Deluxe bass circuit

I will publish some response curves showing full boost and full cut for each of the three bands of the tone controls soon.
Of course there is a good deal of interaction between these controls, which is normal for such a simple baxandall circuit.
To achieve proper separation involves three separate op amp stages

For example: if you have full treble boost and then turn up the midrange it will actually cut the treble boost response down

All for now - have work to do

Hi Bajaman...I will try the schematic tonight, I did find a Benavente 3 band eq, I made a copy using Diy Layout Creator. It seems very like the MIJ Fender preamp with some adjusting of the values.
Top

okay - here are some graphs I am about to breadboard it up...so it worked ok for you Bajaman?
Top

One question: can you point the pinout for the pots in your schematic?

I am about to breadboard it up...so it worked ok for you Bajaman?

Only a simulation at present , but i do not see why it would not work properly in the physical realm

One question: can you point the pinout for the pots in your schematic?

reading left to right on the schematic: pin 3, pin 2, pin 1 (where pin 3 is the clockwise pin, pin 2 is the wiper and pin 1 is the counter clockwise pin)
All the same

ALL tone pots are 100k linear

Anyone up for the single sided SMD board layout then