by mildew
A month ago i put two linear Alpha pushpull pots in my prs dc22.

After a week, one pot failed - short circuit when turned up to 10.

Now the second one has failed with the same fault.

Exactly my thought earlier this morning. It's easy to blame the part but without any information it's far from sure the parts are to blame.

by Jarno
I use a fuckton of these in my modulair synth (not push pull though), no problems at all.
And contact cleaner in a virtually new pot?

I see what you did there.

by mildew
An update - retailer sent me a replacement for the first faulty pot.

the replacement lasted about a month before it went faulty like the other two, so i put the prs audio taper push/pull tone pot back in as a volume and it works perfectly.

so out of three alpha pushpulls, one lasted a week and the other two about a month.

they were the only pots ive ever had fail that couldnt be fixed with a squirt of contact cleaner - ive got guitars from the 80's where the pots are still fine.

I used the same 25w soldering iron the i use for everything else - these three alpha pushpulls are the first pots ive ever had fail.

by phatt
Not sure what has happened here but worth a note of caution;
Those pots are quite delicate, the weak link is those tiny rivets that hold the lugs. The connection between lugs and pads is only via contact pressure of rivet so just bending those solder lugs can make the connection intermittent and as mentioned overheating will weaken the rivet pressure on the joint.

If the lug can be moved from side to side then the rivet has lost it's grip and a high chance you will have trouble. I've revived a few simply by repressing the rivets. (Delicately of course)

If the pot is just scratchy then that is the pad to wiper connection failing or dirty, cleaner may help for a while but I've found if you have it apart you may as well replace it.

FWIW, I wrap a short piece of masking tape around the outside of the back cover which helps to keep blobs of solder and crap out of the working internal parts.
It also stops small insect critters from setting up house,,, you would be surprised where critters find homes

by deltafred
Pots sometimes fail through no fault of their own! 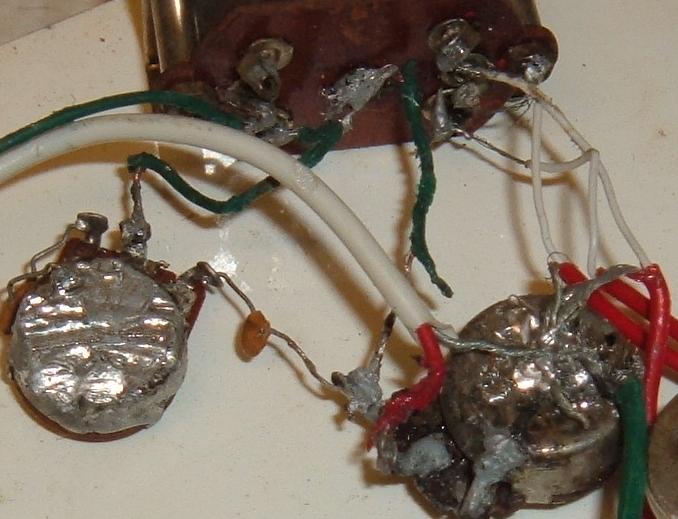 mildew wrote:An update - retailer sent me a replacement for the first faulty pot.

Are these from different batches?

I would try both a different batch and a different man holding the iron. That would help finding whose fault it is...

Now I have to clean the coffee spattered on my screen and dripping out of my nose....

by deltafred
That was from a Strat that our guitarist bought very cheap, he asked me if I could have a look at it!

The switch worked after a clean but the pots went straight into the bin. It had an expensive set of pickups in that were worth several times what he'd paid for the whole guitar. They are now in one of his gigging guitars and some cheap ass pups went into that one.

by DrNomis
To be honest, I've never had a pot fail on me by going short-circuit, the ones that have failed on me have always gone open-circuit, there's at least two failure-modes I've seen in pots so far:


1, The solder lugs go lose where they're riveted to the resistive carbon track ends, and wiper connection on the phenolic substrate, the funny thing is I've noticed that certain values of pots seem to be more susceptible to this failure-mode than other values, the riveted joints tend to go lose due to heat-stress from overheating when soldering.


2,The carbon coating on the resistive track Flakes-off, due to the age of the pot or just mechanical wear, sometimes the flaking is enough to render the carbon track open-circuit.

by astrobass
I've had the same experience as DrNomis. And I've never had a pot fail that wasn't particularly old or subjected to a clearly excessive amount of mechanical wear.

by Fender3D
Well,
I repaired a guitar which pot's solder lugs shorted to the shielding coating...

deltafred wrote:Pots sometimes fail through no fault of their own!

by mildew
I must apologise to Alpha for bagging their pots, turns out the "Alphas" that i purchased from realtone music were fakes - no date or manufacturer codes.

dont buy from realtone, some of what they sell is fake.

by lolbou
Good to know, thanks for the feedback!