Hi folks
First thanks to pf_fan for his encouragement and pictures, and a special thanks to the nice person on the EMG forum for providing some nice hi-res pictures of an SPC and EXG circuit board.
Now to the nitty gritty

EMG produce a range of active tone controls, but the most popular configuration is that used by david gilmour in his red strat - the DG20.
The most recent version is completely solderless with push on connectors and all the componentry is hidden between the rear of the pot controls and the PCB.
There is an earlier push on version with components mounted on the rear of the PCB but there is also a lot of plated through holes to the other side - damn

I was able to determine the schematic relatively easily from this picture, however being surface mount, none of the capacitor values (except the 1uf and 150n polarised ones) are visible.

I tried a few different values in Micro Cap 9, but due to the interaction of the parallel branches in the EXG part, I was finding it very difficult.
EMG have kindly provided response curve graphs on their website so it was just a matter of trying to get the same response characteristics by juggling capacitors. Alas MC9 was just not up to the task, so I decided to mount a fresh horse (so to speak).
Enter National Instruments Multisim 10.1.
Some of our senior members may remeber a program called Electronics Workbench (back in the days of 486 computers

) - anything bigger than 4 components took about 20 minutes to run an analysis.

WELL - thank the Lord for Pentium 4 computers, because EWB has grown up and become Multisim 10.1, and it runs analyses instantly.
I set to work and using the AC analysis/grapher function I was able to "fiddle" with the unknown capacitor values until i arrived at almost identical response curves to those on the EMG site for the EXG SPC AND RPC modules.
Stay tuned and these will all be uploaded in due course.
First up though - here is my hand drawn schematic for the buffered input SPC and EXG module.
Someone here may like to redraw it and pretty it up - feel free. 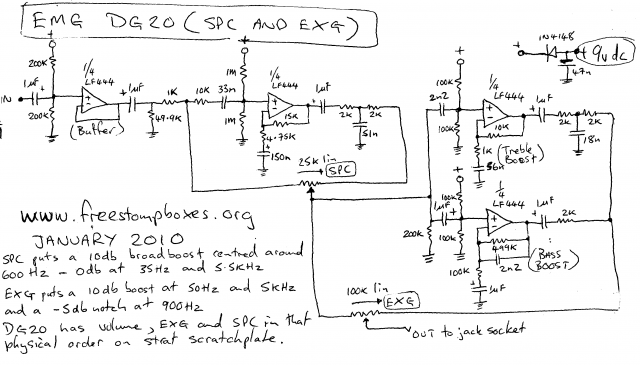 Thanks! I would love to try building some of these things.

email me if you want higher res
cheers
bajaman 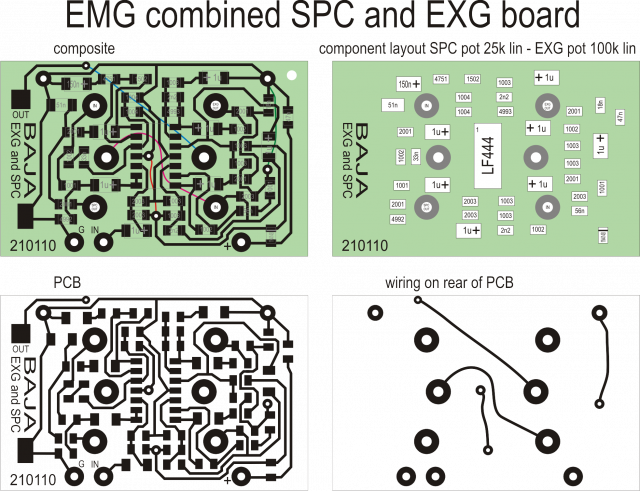 These are the simulated response curves of the SPC and the EXG using the component values given in the above schematic and board layouts.
Compare them to EMG's graphs 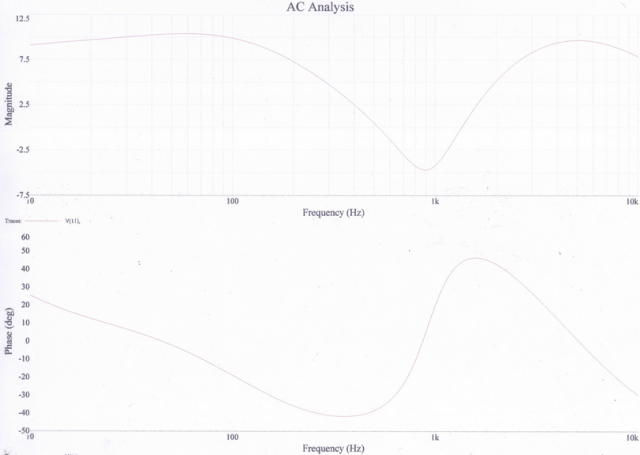 This is the EXG AC and Phase response graph shown with 100k linear pot at full clockwise rotation. 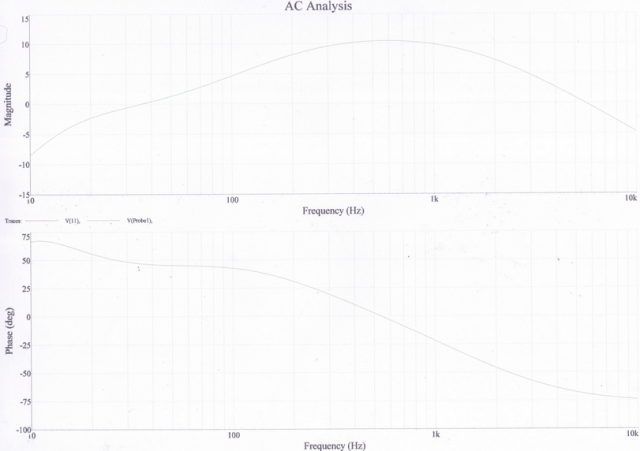 This is the SPC AC and Phase response graph shown with 25k linear pot at full clockwise rotation.

The RPC (like the SPC) was originally implemented using a single op amp circuit - TL061 (or LF441) - (no buffer on the input) - later versions of both have a buffered input utilising a dual op amp (either TL062 or LF442). The supplied board layouts here are for the unbuffered versions which work fine with ACTIVE pickups - the buffered versions use the same input stage buffer as the hand drawn DG20 schematic in the first post in this thread.
The board layouts are provided for both smd AND through hole versions of the RPC and SPC single op amp implementations.
The response curve is provided for the buffered RPC circuit using these part values.
enjoy

bajaman
board layouts are 600 dpi 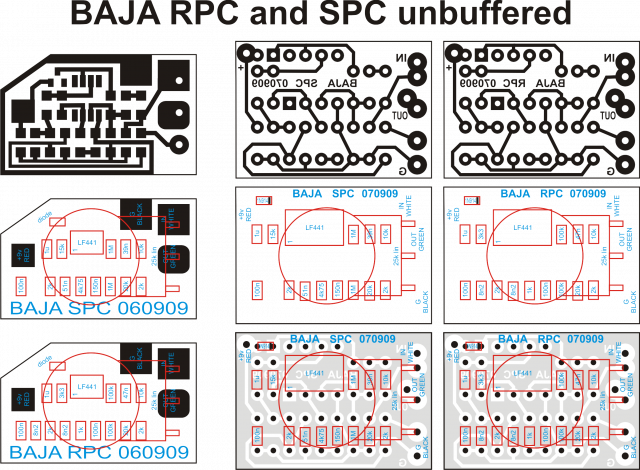 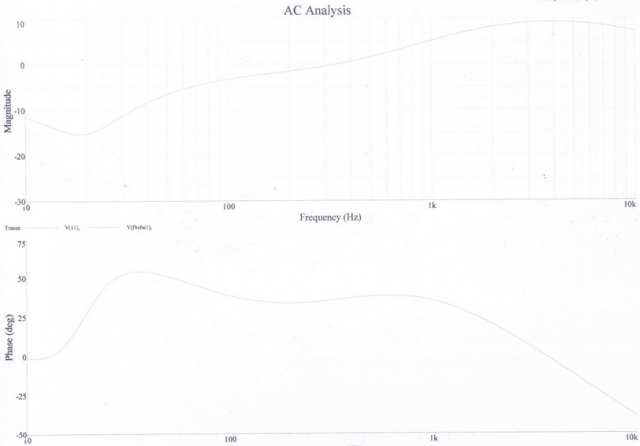 ps: there is absolutely no reason why these little active tone control circuits cannot be used on the output of any of your favourite fuzz box circuits - who knows you may just end up with the next rave booteek toobskreemer

Great work Baja! I am very pleased to see this circuits, especially SPC and EXG controls. I am going to build one.

Don't forget to post some pictures of your build and comments etc.

Steve's back! Thank you Sir, you're legend

This is what I really need, my new single pickup guitar just came in couple weeks ago, and I'll try it with it

Thanks Steve, big thanks for your work!

Hi there I just soldered components on my SPC. I used 2.2k instead of 2k resistors and 47nF as I don't have 51nF capacitor on hand. But with slightly increased values of 2k resistors it should work just fine. I used 1M resistor instead of 20k hope it doesn't change anything though? I didn't analysed this circuit deeply yet. Here is the picture took using my mobile phone camera with it's LED lamp. 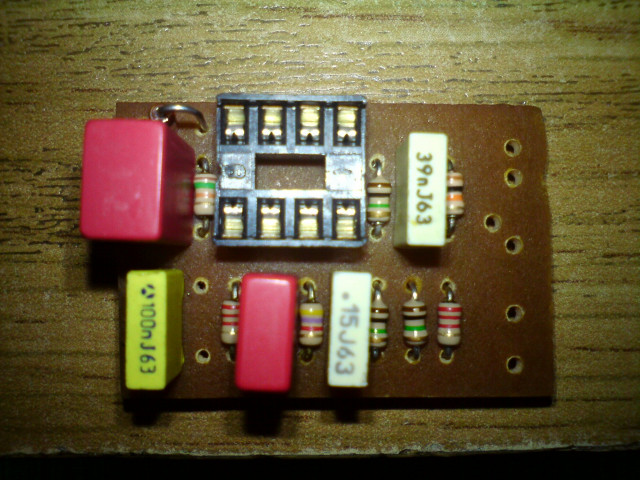 Mariusz
The slight difference in component values will make almost NO difference to the sound of the SPC. Some of the earlier SPC boards used 5k11 instead of 4k75

If you are using an active pickup (which has a low output impedance), this circuit will work fine.
The reason for the 20k input impedance is to provide the proper loading for the active pickup - it may appear to be a little too bright if you use a 1M input impedance resistor.
If you are using a passive pickup it is best to insert a unity gain buffer (the same as in the DG20 schematic in the first post of this thread). This is what EMG are currently selling for folks that want to use the SPC but do not have the EMG active pickup system, however you may still get acceptable results without the buffer using a 1M input impedance resistor.
Don't forget - this resistor is effectively in parallel with the two 1M biasing resistors connected to the op amp non inverting input - this gives an input impedance of approximately 333k. If this appears to make the pickup too dull sounding, you could increase ALL these resistors to 3.3M (this will give a 1.1M input impedance) and reduce the 39n input coupling capacitor to 12n to maintain the same low frequency rolloff.
Cheers and nice work

Hi there, I'm going to use spc with passive pickup so I thought to give 1M resistor on the input. It's almost done. BTW I don't have LF441 now so I use MC741CP instead but it should work just fine. The main difference is jfet inputs in LF441 if I'm correct. So tomorrow I'm going to test it with my crappy squier strat from china OMG!

Thanks again for your work Steve!

The LF441 or TL061 are used because they have a much lower current draw on the battery - (typically 200uA) a 741 has typically ten times the current draw (maybe more!!!) so your battery will only last about 1/10th of the time. The 741 op amp input impedance is a lot lower too - but that may be of some advantage with those shrill ceramic chinese strat pickups

I have a TL071 somewhere will see what sounds better. For now I will try it alone in chain between guitar and amp or other effects so the current consumption is not a problem.

Thanks for the reply.

Once again resolution is 600 dpi
enjoy 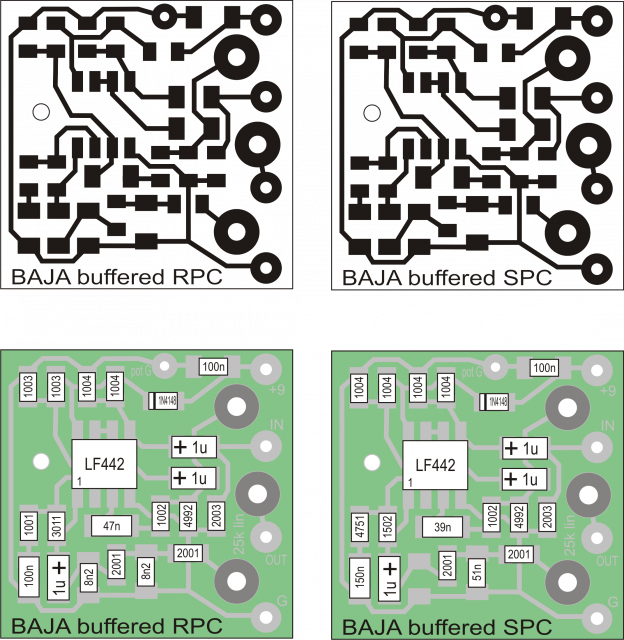 Hi Steve, great work. But maybe you could make non smd layout? I am waiting for the potentiometer to try out the spc.

Thanks a lot bajaman!
Great work!