It's a bit early since this isn't out yet, but the new EQD Fuzz sounds really great!

We used every trick in the book to craft a classic fuzz Device that sounds good with any pickup type, anywhere in the chain (even before a wah pedal!) without any tone-sucking impedance mismatching. We build each Erupter with a buffered input section, transformer-based pickup simulation, new production 5% ½ watt carbon composition resistors, metallized polyester film capacitors, Sprague and BC electrolytic capacitors, and low-gain, hand-matched NOS silicon transistors[…]

So this is basically a Silicon FF with the AMZ Pickup Simulator and a Buffer in Front? Anyone smarter then me wanna chime in? Shouldn't be too hard to trace...
Top

The only gutshot I could find. Not extremely helpful, but still better than nothing. 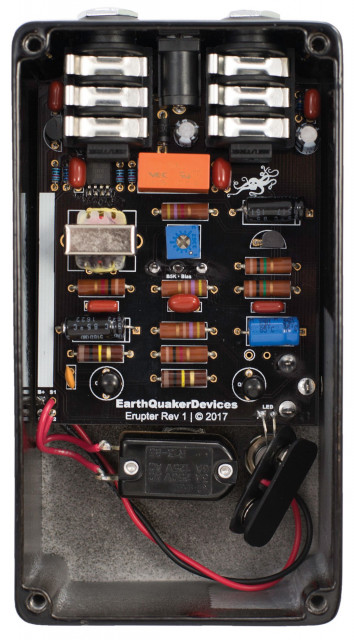 I wish I were a chestnut tree, nourished by the sun.
With twigs and leaves and branches and conkers by the ton.
Top 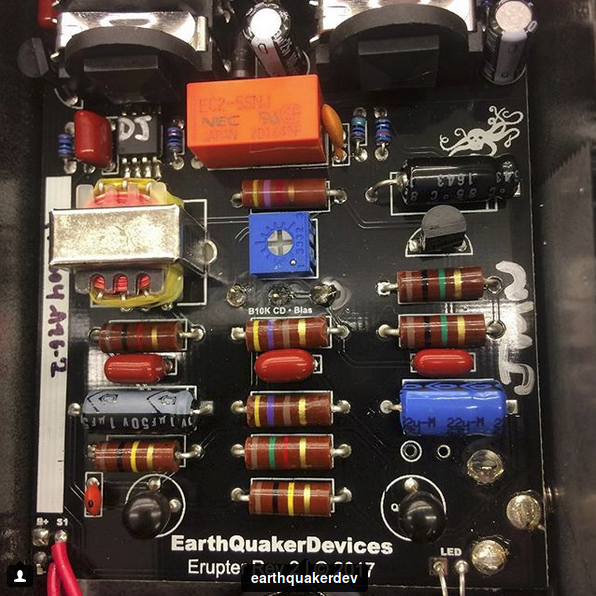 You find more at the forum through the search function with the catchwords "EDQ" and "Earthquaker devices".
Click the "Search" button, which can be found on the toolbar on the right top.

Yes after much hard work, several days of training, and one near fatal incident, i did manage to master the search bar back in the late 90s. Alas it gave me no results
Top

It was supposed to be 'Anyone got an EQD erupter schematic? Hence the confusion and the flippancy of my first reply haha. I couldn't find a schem for the erupter anywhere and nothing came up when i used the search bar here. Apologies for the confusion and thank you for what i now realise was well intended help and guidance

Is there a way to edit the title?

"We build each Erupter with a buffered input section, transformer-based pickup simulation, new production 5% ½ watt carbon composition resistors, metallized polyester film capacitors, Sprague and BC electrolytic capacitors, and low-gain, hand-matched NOS silicon transistors to deliver a well-rounded and defined fuzz tone with just enough pummeling intensity, so you can rock n’ roll all night and still get to bed at a reasonable hour." 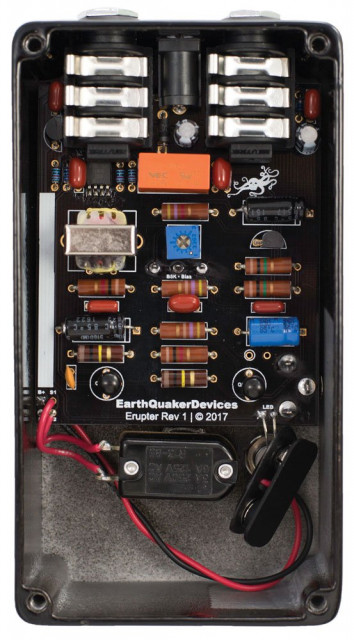 I've been trying to do some tracing as well. I don't really think the circuit is a modded Octavia. The transformer is likely at the front end as a Pickup simulator as stated already.

I used the two gutshot provided by EQD (Rev1) and the one posted here (Rev2). I tried to follow the traces on the pictures and marked what I think is connected.

I put together a sketch of a schematic which looks very much like a Fuzz Face circuit (surprise!

). The Input section is an interpretation of what the traces look like, but this fits well with the pickup simulator described on muzique.com. I think I drew the Input cap (1uF) the wrong way round, sorry for that. Most connections to GND are just assumptions as there are no traces visible.

The piece of schematic containing the two 1M resistors is just a guess, after "duck_arse" over at diystompboxes gave me a hint that the transistor close to those resistors might be an input-buffer of the form of an emitter follower. This would go well with the fact, that the input impedance is 500k (as stated on the EQD homepage).

More photographs of the PCB would really help tracing this thing. Especially to find out the cap-values and the kind of transformer used. I'm already looking for used pedals in germany but wasn't lucky yet. 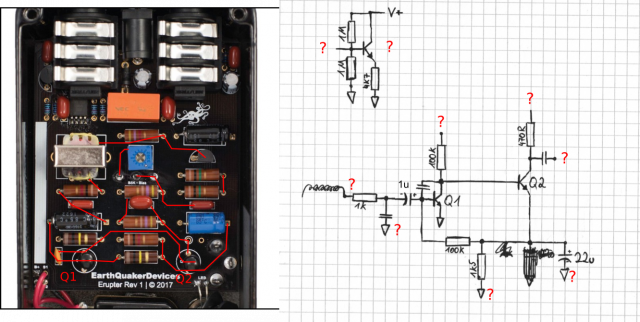 after trying to trace this thing from photographs I just bought a used unit and traced it with the DMM. The schematic I had traced before was almost correct but I was able to add all remaining parts values and adjust some minor flaws. Here is the traced schematic without the relay switching circuit. I am 99% sure that this is correct. BTW, it's the Rev 2 version of the effect. There's also a QRS Rev 1 version which has a somewhat different structure around the BIAS pot and uses a B5k for the pot.

In the Rev 2 version it's a B10k CD (center detent) and an additional 5k trimpot controlling the bias. If somebody is going to build and verify the schematic, I highly recommend using a Volume pot at the output as this thing is really loud and the volume changes with the sweep of the bias pot. In the Rev 1 version there's also a 100k trimpot included to control the output volume.

I'll order the parts soon and try to build the circuit around some BC108s, BC109s or BC183s. I have already some ideas for mods that I might try. If you have other suggestions for transistors, feel free to share them. I couldn't find the original 2N497 trannies.

If there are questions, please fire away. 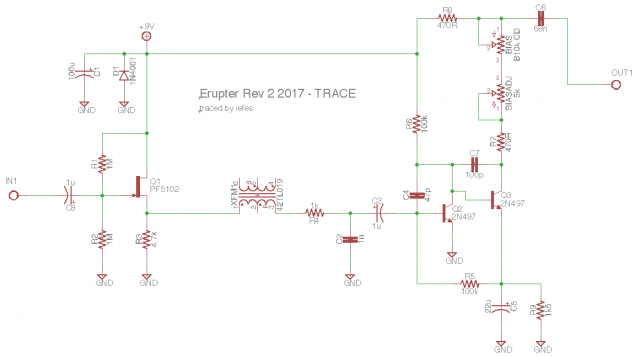 This will be my first build and I'm stoked! What is a good alternative for the 2N497, as they are hard to come by?
Top

spookybob wrote:This will be my first build and I'm stoked! What is a good alternative for the 2N497, as they are hard to come by?

It says they have similar response.
Top

The TM019 should be fine, it's just slightly larger than the TL019. I have it on the breadboard right now and it works. But I'm still experimenting with different transistors. The high gain BC108s and BC109s I have don't sound very nice. They all read between 400 and 500 hfe.
Top
Locked
13 posts • Page 1 of 1