All frequent questions on switching: true or not true bypass, transistor-based or mechanical.
Post Reply
7 posts • Page 1 of 1

I need a channel switcher to help my forgetful ears compare between builds. I wanted buffered switching and I decided CD4051-4052-4043 multiplexers would be the way to go (I have a box full of 4000 series CMOS ICs so I wanted to use them).
For the control part, the ICs that seemed more appropriate for the job and were in the box happened to be CD4093 and CD4042.

At first I tried to mimic R.G.'s Programmable FX Switcher with Amp Controls, but R.G.'s using another IC.
Besides, right now I'm not so sure R.G.'s circuit is working as is. The Q outputs follow the D inputs as long as LE is high (I'm talking about the MM74C373 here). But the LE pin and the selected D pins are fed with (more or less) the same signal. When the signal goes low, what's stopping the selected output to follow the input as it goes low again? In other words, how can one be sure that the LE signal goes down fast enough to stop the selected Q output following the going-low D input? MM74C374 seems like it could do the job, as data transfer occurs only on the pozitive level transition on the Clock input.

So, on my breadboard (I'm talking about CD 4042 now), the push-buttons would light the LEDs attached to the Q outputs, but the LEDs would switch off as soon as when my finger left the button. It seemed a way was needed to make the High signal on D inputs last longer than on the Clock input. I found a snippet called a "pulse stretcher" which does exactly that - a capacitor is charged through a diode, so the pulse last until the capacitor discharges (D1, C4, R4).

Part values were chosen from what happened to be at hand. The LEDs resistors are a bit on the high side, but I just needed them to work. 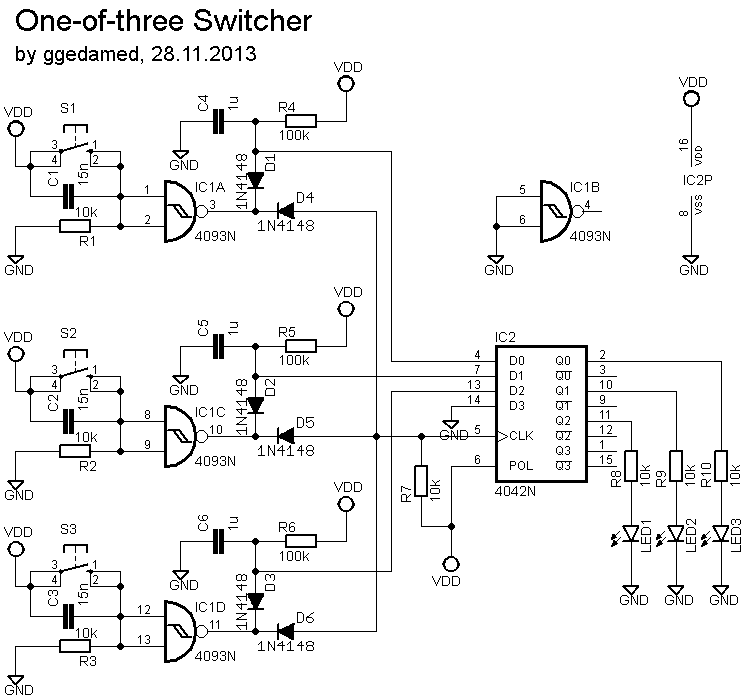 Now, it is clear enough for me that I need to start using microcontrollers to lower the parts count. Does any of you, FSB microcontroller gurus, care to point me to a low-cost, easy-to-learn resource to get me started? Thanks.
Top

I found a way to use only the CD4042 for switching control, on this page. One more reason to start learning Chinese 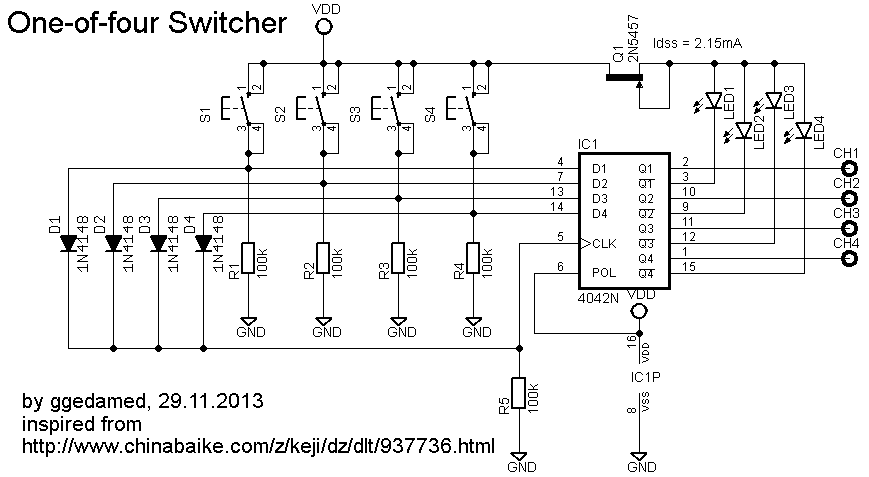 It works down to 3V with current limiting resistors for LEDs and at least down to 5V with a 2N5457 instead (I didn't try lower). It works with my rectifier bridge+capacitor non-stabilized wall-wart. Basically, works with everything I could throw at it at my home. And I like it, because it has only one IC and no capacitors.
I already conceived a 4-channel switcher adding 4 diodes, a CD4052 and a dual op amp. I also conceived a 6-channel switcher with 2 CD4042s and 2CD4053s and more op amps. I would definitely like to make the latter, don't know if I can squeeze it in the box, though.
Top

I (finally) built a 1-of-3 channel switcher using the snippets above. I'm usually testing extreme gain distortions so it had to have an input buffer. The bonus is that I can use the switcher as a buffered splitter. I tried to use the usual protection methods. It doesn't have a reverse polarity supplying protection yet.
Choice of parts: mainly because they were in the drawer.
The TLE2426 can be replaced by a simple resistor divider, the 330n caps were chosen because I wanted SMD and this was the largest value in my drawer, the push-buttons were salvaged from an old gameport joystick and are actuated by reversed screws, the box is from a metallic syringe.

It works quite nice, no switch pops, no noise. It starts with all inputs disabled, which is nice.

And this are some build pics: 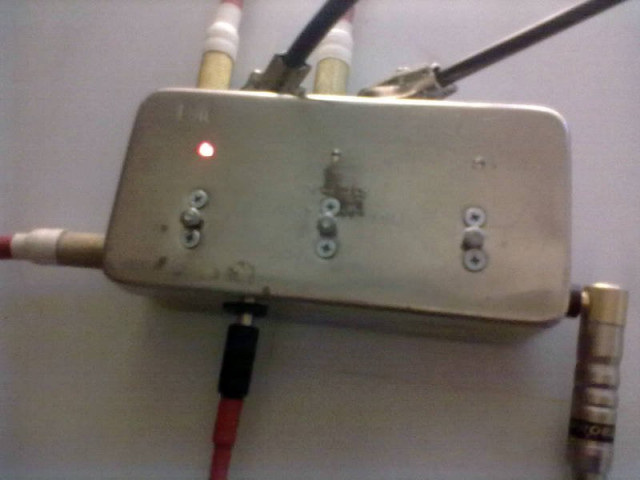 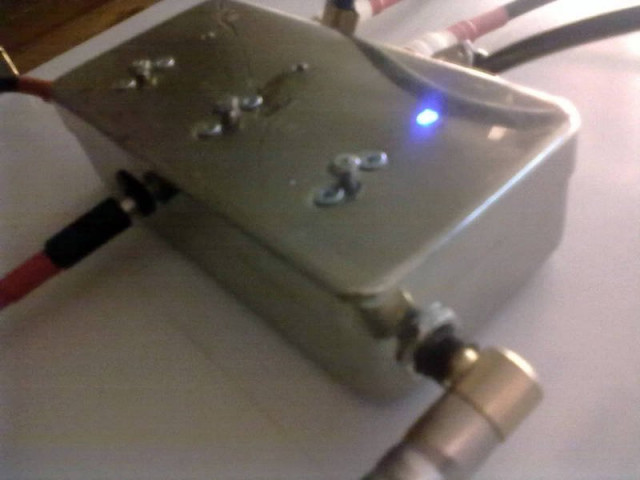 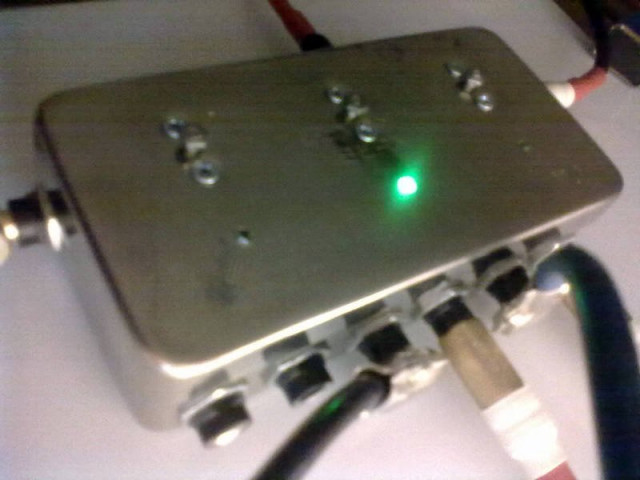 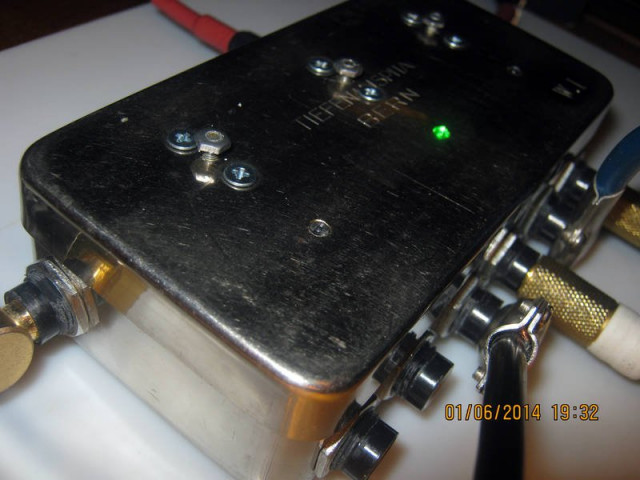 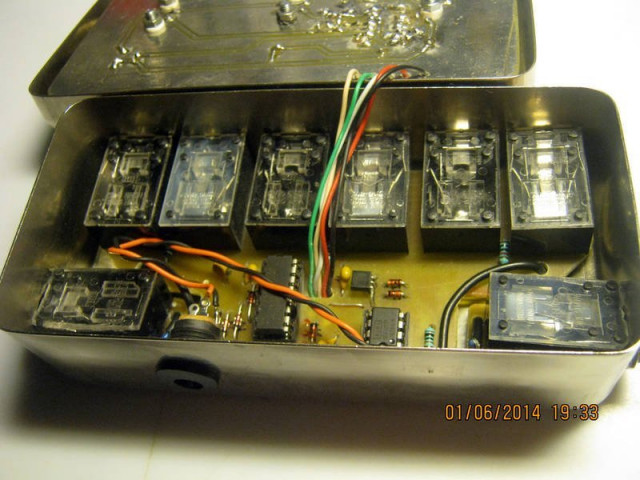 What's the switching sequence on this?. Is it like chann 1 > chann 2 > chan 3 > off & vice versa?
Finch: A witty saying proves nothing - Voltaire
Stifler: Suck my dick - Ron Jeremy
Top

There's no sequence. It starts with all inputs disabled, then you press any button of the three (S1, S2 and S3) to enable one input. Pressing another button will enable its corresponding input and disable all others.
I made it to compare effects (mainly distortions

), so it doesn't have a hardwired bypass setting. Although one could connect one input to its corresponding output and call it bypass.
Top

The previous (2014) schematic contains an error: I chose to use the A1/B1/C1 (or ax/bx/cx in the datasheet, pins 12/2/5) outputs of CD4053 - which allow signal when their corresponding control inputs (A/B/C, pins 11/10/9) are connected to 0V. LEDs will also light when their catode is connected to 0V. This means that the LEDs and the control inputs have to be connected to the same inverting outputs of CD4042 (Q1/Q2/Q3, pins 3/9/12 of CD4042).
I attached the corrected schematic and board (sorry about the jumpers 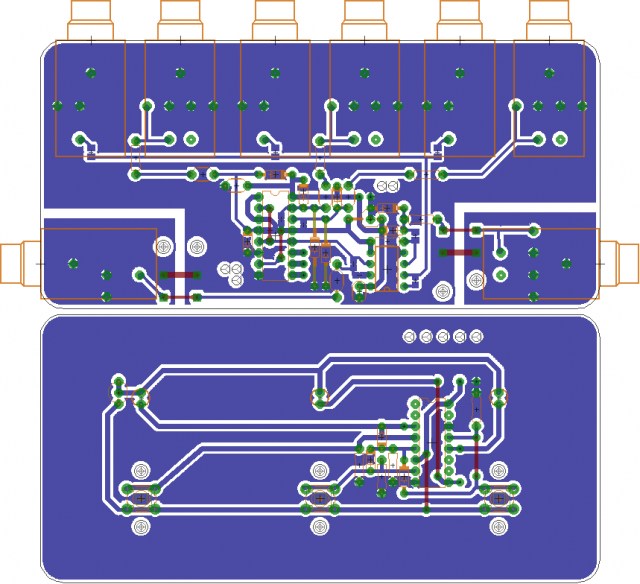 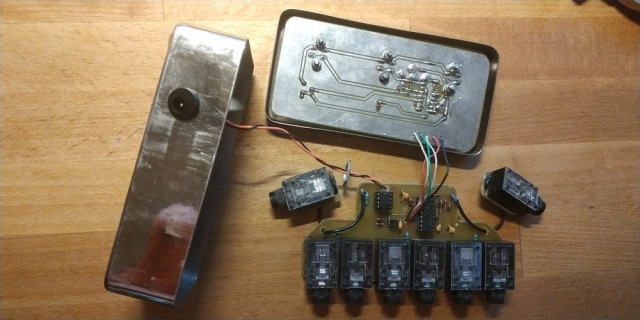 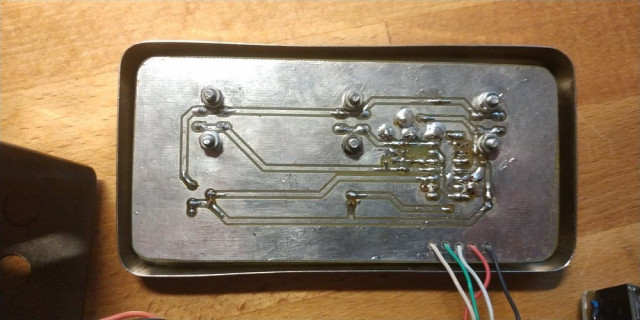 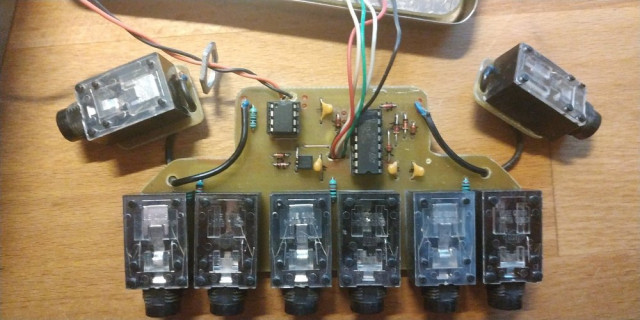 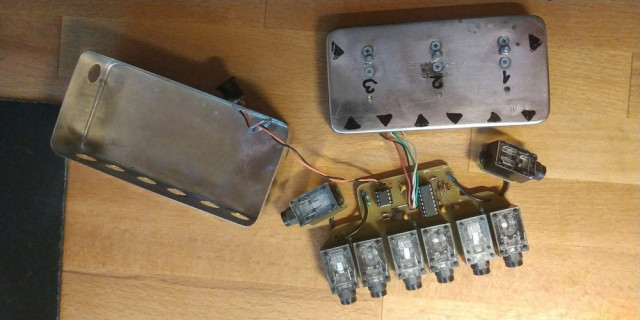 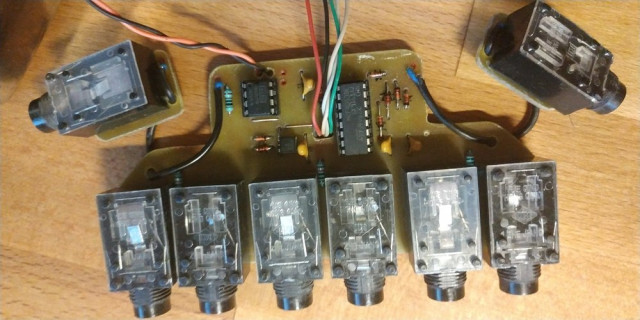 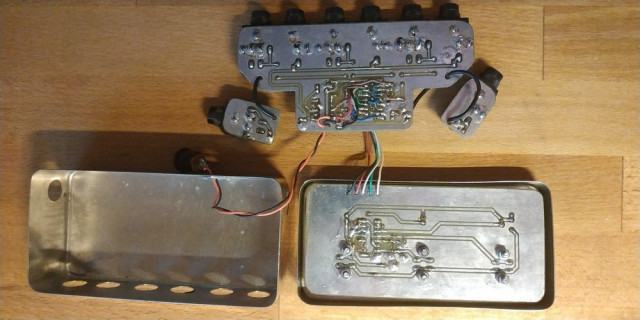 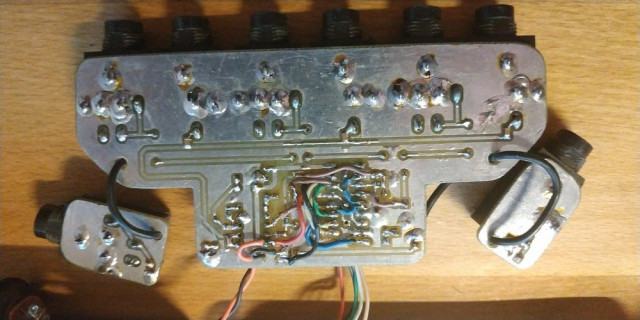 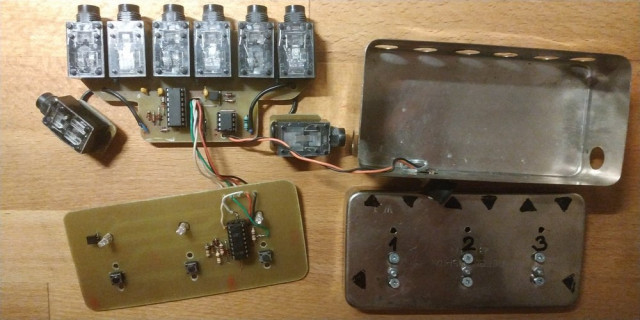 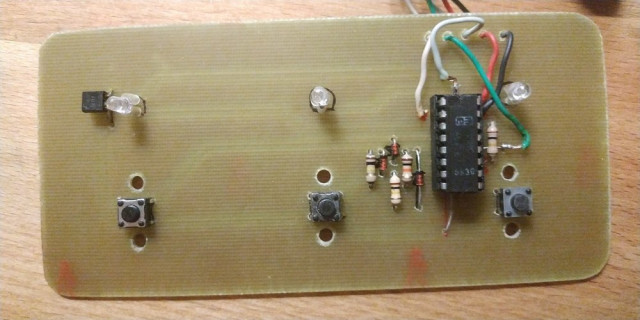 I also found an old video showing it in action: