Frequent questions about dead or faulty pedals. Whether you repair, mod or build pedals, debugging is important. Threads about general debugging problems irrespective of the circuit involved...
Post Reply
5 posts • Page 1 of 1

Hi im not new in this forum but this is the first time that i am posting.
I build the philosophers tone pedal and when i use it with distortion I get a whistle from the pedal. I get that even if i dont plug the guitar or the cable in front of it. It just happens and it removes only when i unplug the power jack.

I dont think the noise comes from the power supply cos it didnt happen to any of my other pedals.
Could this come from the ground?(because of different ground voltages with this and the distorton pedal?)
Or could this be because i have the charge pump in the pedal and i should remove it to the outside?

I add a pic so that you can see what is going on in the pedal. 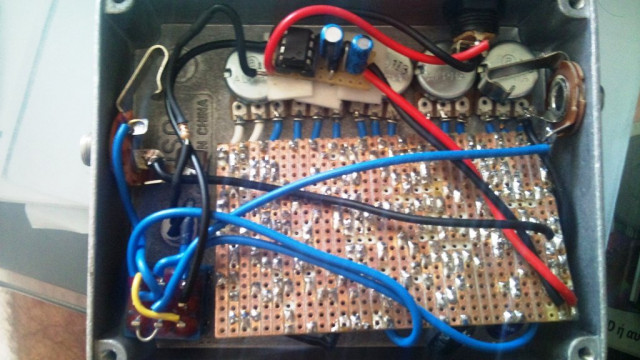 Here is a video to know what i mean.
I just learned that whistle is whine so sorry about my bad english

I don't know if you already solved your problem but I had a similar problem when I made Klon Centaur with charge pump. I used 7660 Acpa and I had the same whistle problem. When I bought and put 7660Scpa problem was gone
Top

If the charge pump is a MAX1044 or TC1044, make sure pins 1 & 8 are connected. That boosts the frequency out of the audible range.
Top


You may want to use the stereo-jack trick to make power switching easier on your stompbox pedals; you'll find that this is not a good idea with a charge pump converter running your -9V supply. This is because in the standard stompbox setup, that wire is the circuit's power *and* signal ground. The current pulses from the switching converter run on that wire, and will cause the signal ground of your effects circuit to hop up and down at the switching frequency - and you'll hear it!