Frequent questions about dead or faulty pedals. Whether you repair, mod or build pedals, debugging is important. Threads about general debugging problems irrespective of the circuit involved...
Post Reply
3 posts • Page 1 of 1

built this pedal last night. it sounds really great besides the fact that the germanium switch comes with a significant drop in volume. the tone produced by the diodes is spot on as well. gone over all my joints and everything is spiffy. it is build exactly to the specs (with a 1n270 in D1) in the attached layout except for:
1) treble 2 lug feeds the 5.6k resistor (i think it was a typo)
2) Q4 is a 1n914 diode. i had an ac128 in there that i had laying around and it was just awful.
3) germanium switch is wired to a footswitch for live switching.

any ideas? the only thing i havent tried is replacing the 1n270 with a new one, but if its fried it shouldn't it not work at all? 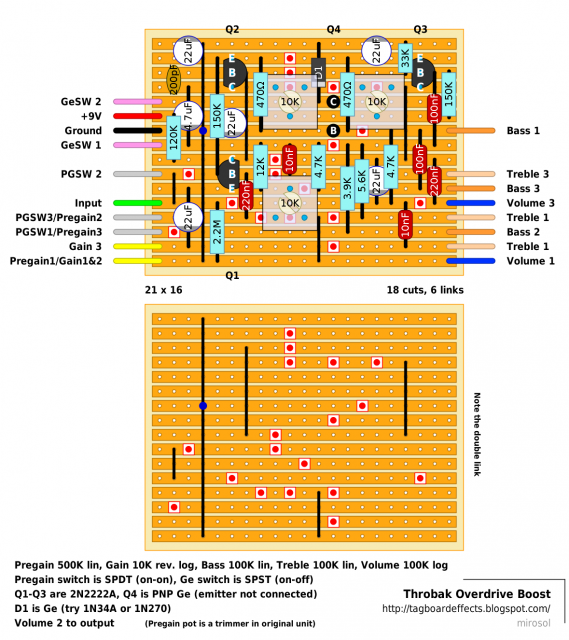 i think i've solved the problem, will be building/testing tonight:
there was room left on the board i used for this build so i slapped together an lpb1 circuit. now, the wire from the germanium switch that previously closed the germanium path is routed to lpb1 "in". A 100k trimpot was substituted for the external pot. i'll use this to get unity gain and never touch it again. lug 2 on the trimpot is now wired to the germanium path.

does this make sense?