So I recently built the Bajaman Optical Limiter and loved it. It's warm & responsive on bass/baritone guitar, and is better than my Xotic SP at adding that "glue" later in signal chain. Because I had to build a bunch of LED/LDR optocouplers to test in that, I decided to find some other optical circuits to play around with.

One of the things I found was the XQP 545 Optical Disruptor/DIYRE Colouruptor, and was super taken by the low-freqency saturation, bordering on waveform modulation at times. According to XQP, the Disruptor started from him messing with their Optical De-esser, which is a feed-forward compressor (sidechain signal is taken from input of GR circuit rather than output) with a highpass filter in the sidechain. He found some interesting behavior after removing the sidechain high-pass filter: smooth, predominately low-frequency, distortion that is asymmetric (compresses top of AC signal but not bottom).

I've been following DIY Recording equipment (who have a great podcast & YT channel), but was reluctant to buy a 500-series rack & not yet confident enought to build a bipolar +/-15V PSU. But surprise, there is a pedal version! It's under a different name, Trip Hazard Effects, and has some changes (more on that later), but they were kind enough to post a schematic, like they do for all of their products.

My Build:
The schematic is a bit difficult to work with, so I made a simplified version without the bypass circuitry & with some more common resistor values. I also didn't have the TLE2426 Rail Splitter IC, so I used the Precision 1/2V Supply from the Bajaman Optical Limiter/Holy Roller. This change is also why the numbering for the resistors/capacitors doesn't start at 1.

I had a bunch of unlabelled LDRs that I've roughly tested & organized based on their dark/light resistance. I had the best luck with a:

- 3mm Red LED (mine were translucent red)
- LDR w/>20M dark resistance & ~2.5K light resistance (tested with 4.7K CLR off a 9V supply). If you're going to test your LDRs, make sure you get the LED perpendicular to the LDR face so that it's not shining off-axis. High dark resistance LDRs are a must, otherwise you will get gain reduction even when there is no input signal.

I also experimented with a trimpot in place of R12, which can help set the upper limit for the amount of Disruption and may be useful for dialing in different LED/LDR combos. To my ear, this sounds closest to the demos (XQP demo/Trip Hazard demo). 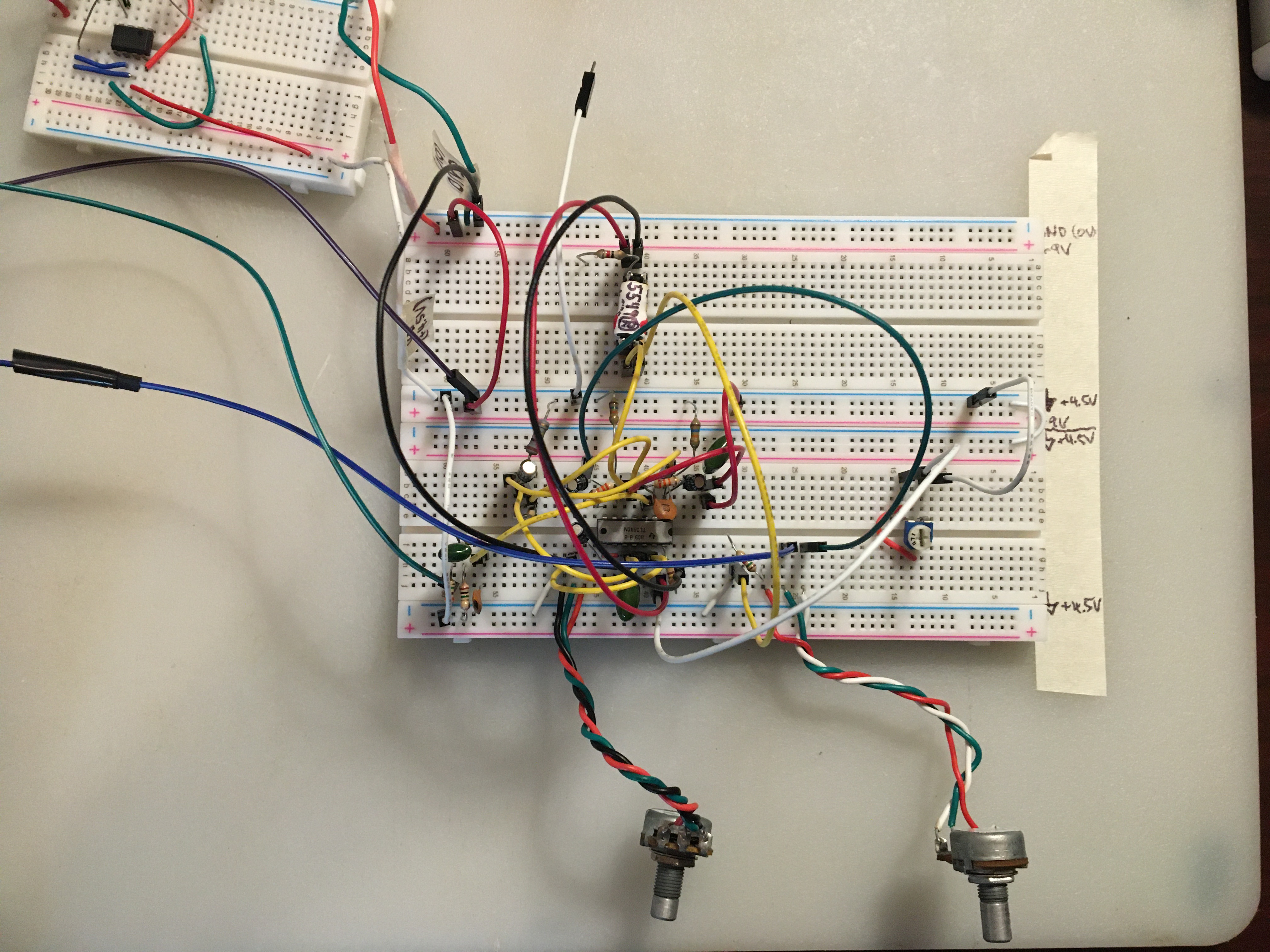 I built this all up on a breadboard, and am working on a vero layout, but it turns out I'm @#$%ing really bad at that. If anybody wants to do a perf/vero layout, I would be glad to build & verify it!

As I've spent quite a bit of time with this circuit, I have some questions that are beyond my level:
1.) I read that the sidechain LED is driven by unrectified signal from a transconductance amplifier (which is a V-to-I converter), allowing input voltage to control LED brightness & giving GR more soft-knee character. All of the gain stages, except the open loop one in the sidechain, look like what I've seen referenced as transconductance amps, is that what is going on here?
2.) Comparing the sidechain LED driver to Bajaman's Optical Limiter, the LED is in a different place. Most optical comp/limiters that I've found route the output of the final sidechain gain stage into a current-limiting resistor before hitting the LED anode and then ground. The Disruptor has the LED in the feedback loop, with the gain stage output feeding a CLR before hitting the CATHODE of the LED before splitting to resistor/ground & the (-) opamp input. Is this where the compression gets it's assymmetric character from? I understand that ideally an opamp wants to keep the difference in voltage between its +/- inputs at 0V, and that the output is an amplified version of the difference between them, but visualizing how this effects the sound is definitely beyond my understanding.
3.) The 500-series version of the XQP Optical Disruptor uses 2x identical vactrols for gain reduction, which I might try. I guess this works as a voltage divider across the 2 LDRs, possibly allowing for differences in dark/light resistance value?

If you have any circuit improvements or corrections, please let me know. I'll record some sound clips this week and hopefully finish a reasonable vero layout (or find one of you fine folks that would be kind enough to do it).
Top

It's been a while since I originally posted this, and since then I've made a few revisions + verified my first perfboard layout.

The biggest changes were:
-Swapping the polarity of the LED in the vactrol. The original orientation ended up kinda sputtery, but when I flipped it around it sounded much smoother on the low frequencies
-Changing the Disrupt pot taper to linear to keep the control from bunching up at one end.

I'm hella new to creating layouts, so I found VeroRoute to really helpful & easy to use. The first perf layout worked great, but the component spacing was really tight. This version is an improvement, but still requires some vertical resistors: 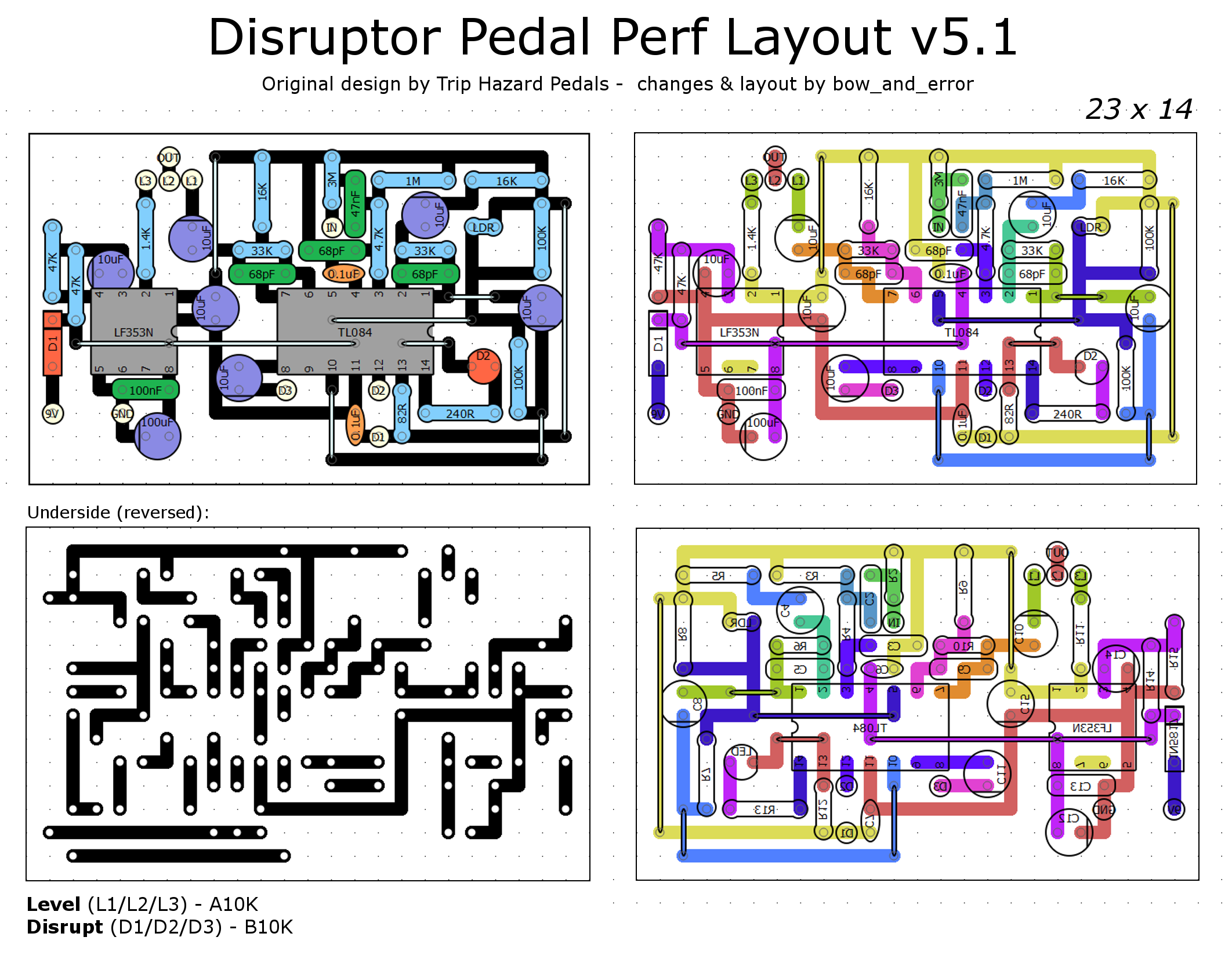 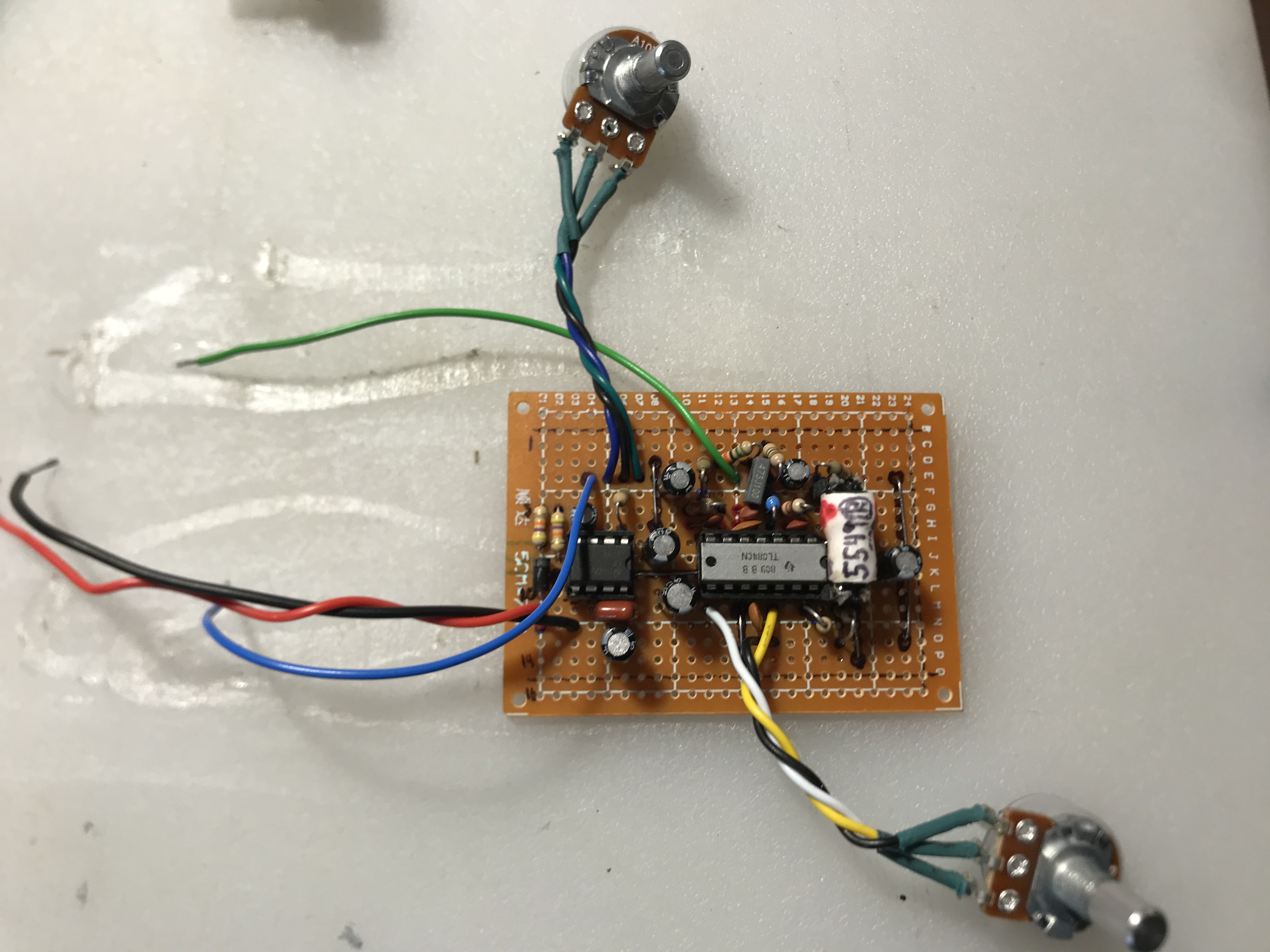 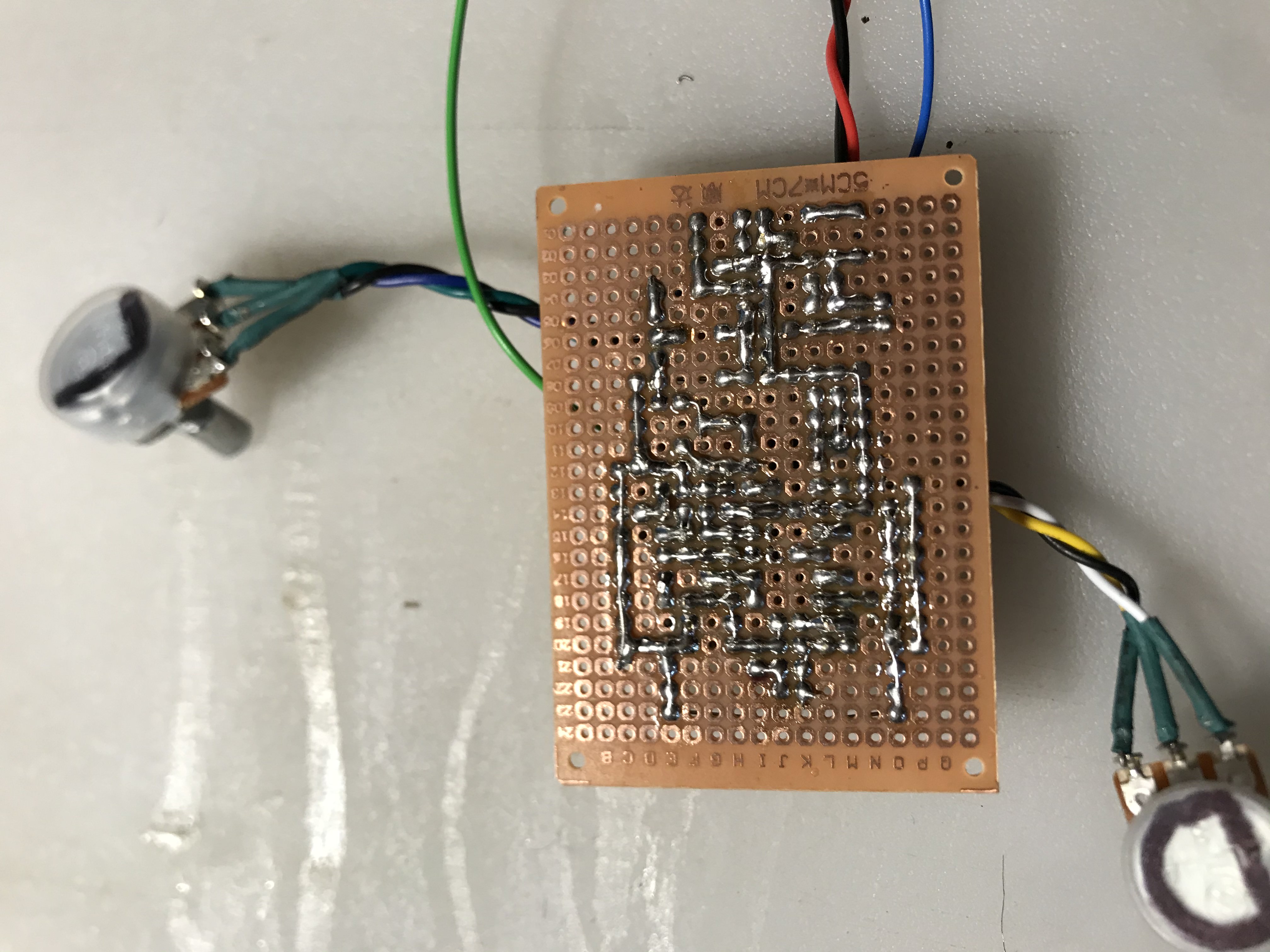 You can see the jumbled components above pin 1 of the TL084, but it sounded good! 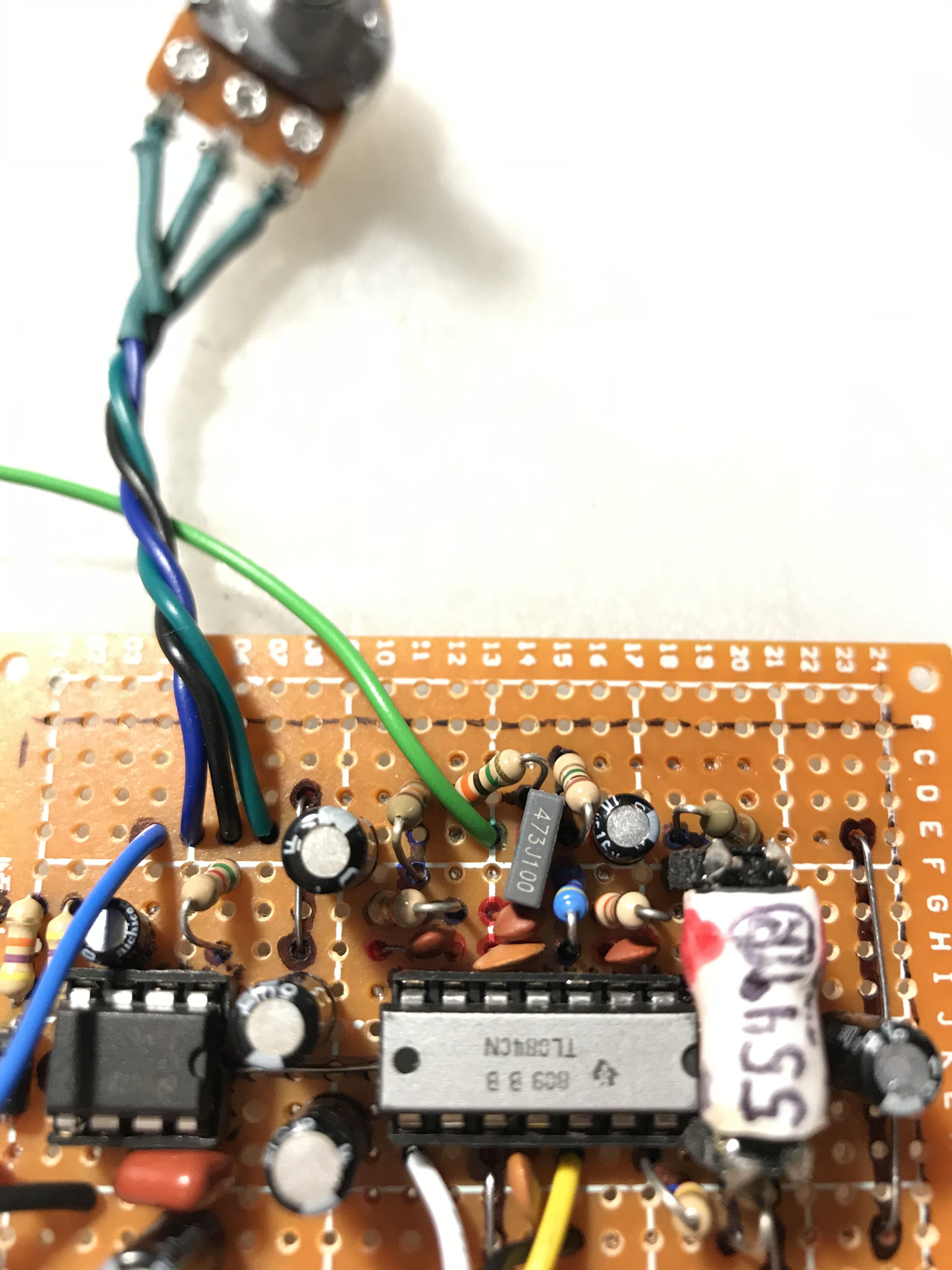 
Higher settings are noisy (as expected), and I am getting some popping when I turn the pedal on. Any ideas as to why that might be happening? I still have the perfboard in my non-shielded test rig, so I'll see if boxing it up helps.
Top

So I solved the switch popping on this circuit, but haven't had time to update the schematic:
- Any ground references before C2 or after C10 (so input GND/output GND/R2/R11) need to reference actual peadl ground - i.e. DC jack center pin & input/output sleeve)
- Any ground references inside those 2 caps are all referenced to Vb from the buffered bias.

That should remove any popping from the switch.

After lots of experimentation, I also found that the VTL5C1 is pretty crucial to getting the right sound in this circuit. As you can see from this VTL5Cx-series datasheet, it is the fastest vactrol they offer, and still has a rather high (>50M) off resistance:

A VTL5C9 might work, but it has a slope around half that of the VTL5C1, so you'd have to try it out to be sure.
Top

Here is an updated schematic with more clear delineation between chassis/IO ground & the Vb that the internal circuit uses:

I also updated R9 to 7.5k, which provides more makeup gain after the saturation/compression section.
Top

I think it sounds great. Thanks for your hard work documenting it all!
Top

If anyone is looking for a vero layout, Dirtbox Layouts did one for the Optical Disruptor: http://dirtboxlayouts.blogspot.com/2021 ... pedal.html
Top
Post Reply
8 posts • Page 1 of 1