Anyone familiar with this pedal?

It is supposed to emulate several BMP versions. I read a favorable review on Gilmourish.com.
It appears to replace some resistors in the clipping stages with fixed and variable resistors so
as to match posted resistor values for different versions. I don't see where major capacitor
changes like the input cap on the Ram's Head version are being addressed. Not sure that it is.
Just wondering if anyone has seen one, used one, or knows anything about it.
“No man is so foolish but he may sometimes give another
good counsel, and no man so wise that he may not easily err
if he takes no other counsel than his own. He that is taught
only by himself has a fool for a master.”
–Hunter S. Thompson
Top

Anyone have more info on this pedal?
I found a gut shot. Coupling caps are 0.1uF by the look.

Anyone know what the interstage "gain" control is? Im guessing the 82k or 100k base reference resistor?/ 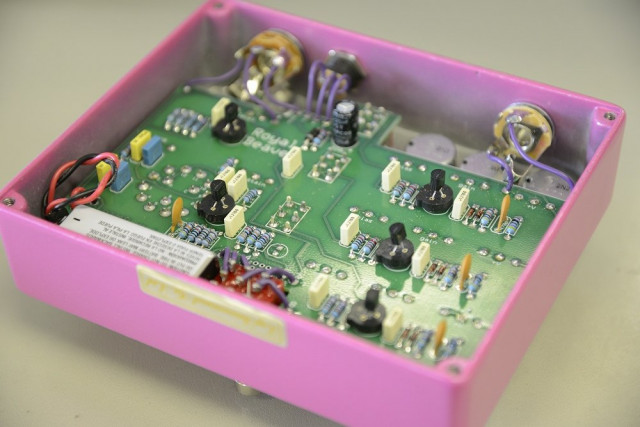 You could probably ask over in the Build Your Own Clone forum. Big Tone is a pedal line from Keith at BYOC.
Top

That's exactly what it is. It only changes the resistor values.

IMO, you only really need one resistor on knob per stage. More important to get the tone of the various eras, are the clipping caps c6 and c7, the input cap and certain couplings caps c1, c5, c13, etc, the tonestack (different versions had different cap and resistor values; IMO the tone stack is often the biggest factor in tone in most distortion/drive/preamp circuits. The distortion stages can be everything but its usually the tonestack that makes it REALLY sound like the line of amps or w/e it is.

Also different transistors were used, as well as diodes, both have an effect on the sound but the 2n5088 or something similar with hfe 150-450 is probably the cheapest and most universal. It can sound like most with the rest of the important values right.

I have 7/8 boards left, after that I might do a run with 15 knobs, 4 switches? Ultimate Luxury Muff... Maybe even diode switches.
Top

The Marshall type tonestack goes well in the BMP and associated circuits. There’s a schematic for a few variations floating around the interwebz.
Top

I musta been stoned. The gain should probable be the emitter, whereas bias is at base and v+ at collector.