I built one yesterday. It is distortus, but not maximus. There's really a lack of gain. I checked the signal on the collector and it was the same as on the input. And the signal is radically attenuated on the base.

Besides, at the end of the guitar sound duration the pedal gives a short puff (as if air into ears) and suddenly switches from the distorted sound to clean. Why could that be so?

Did you checked the pinout of the transistor? BC550 have swapped collector and emitter compared to the 2N5088.
Regards,
Mariusz.
Top

No, that was a different problem; It was a veroboard, I just soldered together two neighbouring strips by chance and the low pot stopped working and so on.
Usually I make veroboards myself, but this time I was using the one I bought in a shop, with very narrow space between strips.

So now it playes awesome. I found that a C25K pot for the mids is better than the A25K. Has anyone tried? And I also tried two IC's: LM386N M-1 and LM386N-1, they sound a bit differently, but both are nice.
Top

I made one more copy for a friend. Since it's very hard to find 2n5088's here, I used old KT3102E transistors. They are actually perfect, but there's a problem: the gain should be 900 or more. Most of the KT3102e are 500-600 gain and when I put them I here some unpleasant grunting during playing and lack of punch. And once I put one with 900 gain, the pedal works fine.

So I have an idea to replace the whole 2N5088 stage with the tillman discrete FET preamp, that
I found there
http://www.till.com/articles/GuitarPreamp/index.html

What do you think, will the idea work out?

You can experiment with Darlington Pair of two lower gain transistors to obtain higher gain! This might work!
http://www.technologystudent.com/elec1/transis2.htm
http://www.ecelab.com/darlington.htm

I was thinking about darlingtones too. I have a few mpsa13, but the have 5000 gain with the collector's 10V voltage. So what I'm warried about is how to kill extra gain to have it fit in 1000.

p.s. all the other darlingtones i can buy are 10000 and higher gain.
Top

soulsonic wrote:also thinking about replacing the discrete transistor entirely with a dual opamp to use for the input boost and output buffer

I like the sound of the youtube demos of this circuit, but it does seem a little odd to have an output impedance of several 100K. I also like your idea of ditching the transistor, and I think making a variable GAIN input stage, rather than fixed gain then attenuate would be an improvement in terms of lower noise.

Looking through the schematic this evening sketching out an equivalent opamp input stage, and I don't think i understand how the transistor circuit is working;
4n7 and 43k (approx) on the input give a high-pass shoulder frequency of about 5kHz.
4n7 and 50k input impedance of LM386 gives a low pass with a shoulder freq of 4.2kHz
The 22nF caps start rolling off at around 400Hz

Where's the treble boost? Don't the two 4n7 RC networks more or less cancel out? Make the first 4n7 >20nF, and remove the second one... with no change (to function)?

biglouis wrote:Hi guys, i have a layout of the Krank Distortus Maximus, made by myself...
i hope you'll like it
(i'm from Brazil, so, sorry about my english)

Does it have an output buffer? If not (it seems so), could you suggest any?
Top

I am planning on using a TLC2262 - don't know how close to the rails the LM386 will swing, but the TLC2262 can get to within a mV or so of the supplies, so it should have no effect on the distortion waveform. Will need static protection diodes on the output, as it's not got any of its own (thanks to whoever it was who mentioned that in another thread.)

Will probably use the spare half on the input, to boost the input impedance. Would be nice to use it for the high boost too, as I don't like circuits with a fixed gain, followed by an attenuator - more noise for no benefit. I am not sure how much effect the imperfections of the transistor boost stage have on the sound, though.

Hopefully this will sound something like the guitar on Decapitated's Nihility, when fed into my Hiwatt. (with the proviso of my appalling guitar 'skills', and I do have to finish rebuilding the amp before I am allowing myself to start on the stomp box!)

in the meantime, here's some Russian dude (anyone recognise the riff?);

Amp distorion channel seems to have a lot bass than the pedal+clean channel...
Top

http://www.muzique.com/news/wah-pedal-buffer/
Will this buffer suit the output of KDM?
Top

remember that, this pedal use ic LM386N3 an not the regular LM386N1, this last ic is a little less gain than the N3 unit.
I left to us my owm artwork PCB

this is my KDM version. 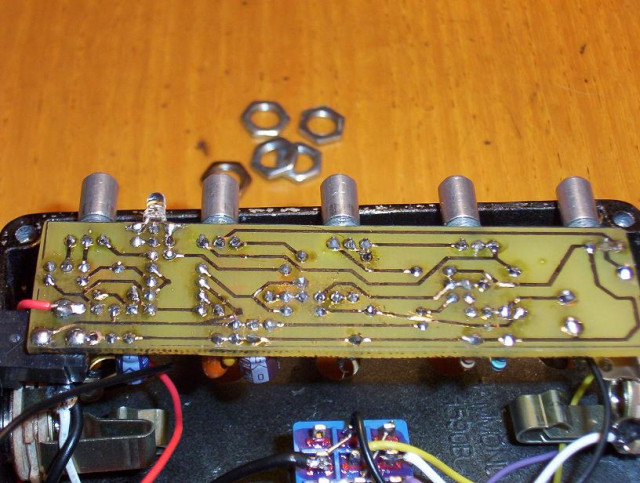 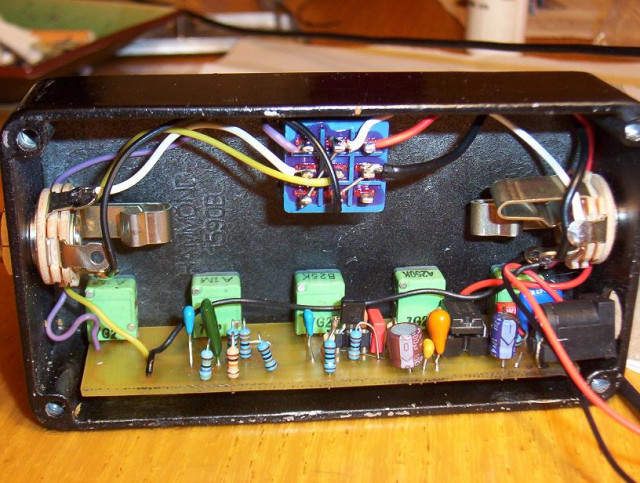 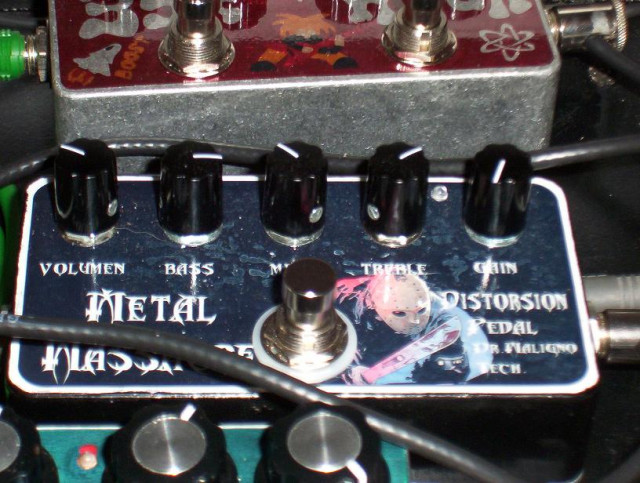 Nice - I like the pots all mounted inline on the pcb, small alpha pots are a neat choice too.

Found another similar layout here, but with gain->bass->mid->treb->vol control order, which seems more logical to me;
http://rockm.ru/viewtopic.php?p=3482&si ... 050ed5b7aa
The layout isn't linked in the post, unfortunately.
Doesn't look like its got an output buffer either.
Top

This is my MAXIMUS: 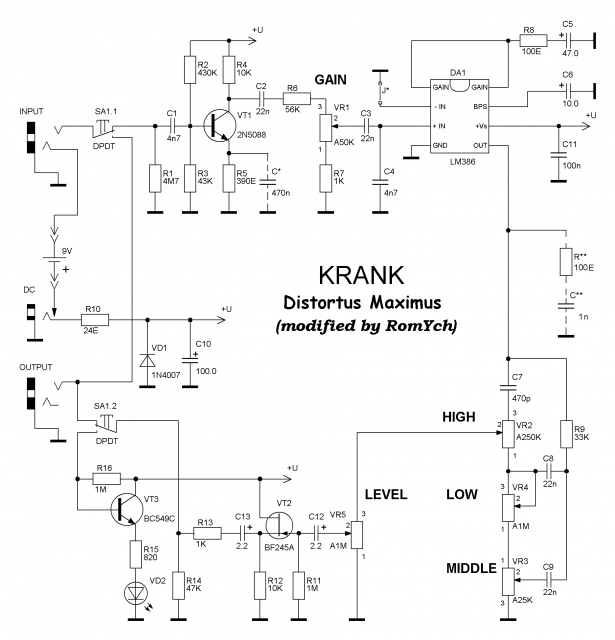 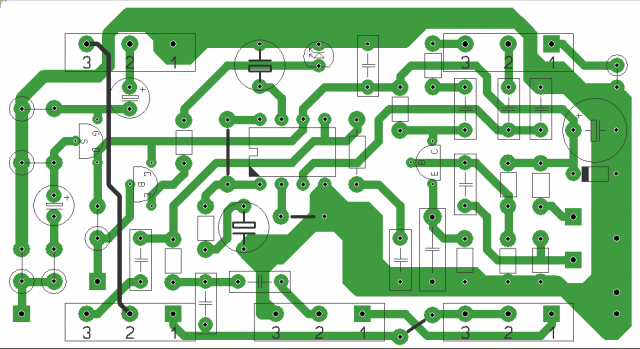 hi RomYch.
How sounds your unit?
thanks for share
visit www.youtube.com/rastamaleekmetal for forum pedals demotrations

hi RomYch.
How sounds your unit?
thanks for share

Hi, Rasta_Maleek!
Unfortunately, I didn't try to live Distortus on this is difficult to compare. But I like the sound of my device.
You're welcome!

Found this and has anyone tried it? its smaller and has pot wiring, note the upside down ic. 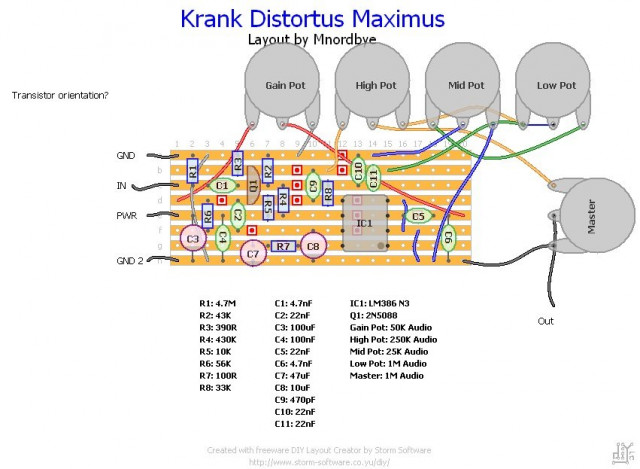 Hey RomYch, how can I read the component list in your sprint layout? Something like C1,R12 or 470K, 2,2nF?
By the way, thanks for the nice layout!