You are welcome..
Cheers
Brane
Top

Is it possible to get rid of the Germanium distortion and put a in/out there?
This would get the opotunities to use a distortion like the tight metal ect
Top

Nicht Bernd wrote:Is it possible to get rid of the Germanium distortion and put a in/out there?
This would get the opotunities to use a distortion like the tight metal ect

I don't think you will get good results with that.. Compressor and distortion together will probably create lot of noise..
Top

i managed ti blow up mine with wrong psu

I might as well take some pictures while I'm trying to find out what blew up...
note it;s the standard ver. not the germ, but I think only the 2 diodes are different.
http://oi59.tinypic.com/2mqlunr.jpg
http://oi57.tinypic.com/2rd7lef.jpg
Top

I finished a Philosopher’s Tone yesterday night and ran into some trouble with the 15V power line.
Some time ago I bought a real “bargain” on ebay. Lots of LT1054 (smd) for small money. Upon arrival from overseas it turned out that they were LT1054L (the L standing for a max of 7V input). Now I thought that would be fine for the Philospher’s Tone. I regulated the input down to 7.2V via LM317 and then tried to double the voltage. Unfortunately that didn’t work to well, I get stuck around 12.7 V and the pedal sounds rubbish.
Now my questions:

1. Should the pedal sound fairly OK at about 13V,or is it fine tuned to 15V?
2. If you use a voltage doubler, do you drive the pedal at 18V or do you regulate the designated 15V-Line (in brejna’s pdf I didn’t spot a voltage regulator)?
3. If the original pedal says 12-18V on it, HOW COULD IT SUPPLY 15V without a charge pump when running at 12V?
4. I don’t get the power supply circuit from mysticwhiskey’s schematic. The 15V point seems to be very much what you put in in there (about 17.99V at 18V input in a simulation)

I really want this compressor. Even at the cost of not understanding what is going on inside.

The 15V marker is what's silkscreened on the original Philosopher's Tone board. You're right, it won't actually be 15V unless you provide a 15V power supply. I don't know why they left that on there, I guess it's the average value of 12 to 18V.

On the clone I built from Harald's vero layout, I used a 9V voltage doubler outputting 18V. It runs fine, but then again I'm using a regulated multi-output power supply which supplies a constant and steady 9V.
Top

Thanks. So this means it should sound quite allright with my 13V supply. The "Grit" sounds VERY much like a fuzz even I turn the knob up only a bit. Not very similar to the youtube demos that made me believe this is THE compressor for me (I very much like compressors and very very much like mild overdrives).
But I finished the built late last night and should listen to it with fresh ears when I am at my workbench next time.
Top

i built one using mysticwhiskey's layout and it works great. even with the volume mod, i wanted more output so it just added a clean Jfet boost on the output, plus a relayed true bypass. in an etched 125B, with all top jacks: 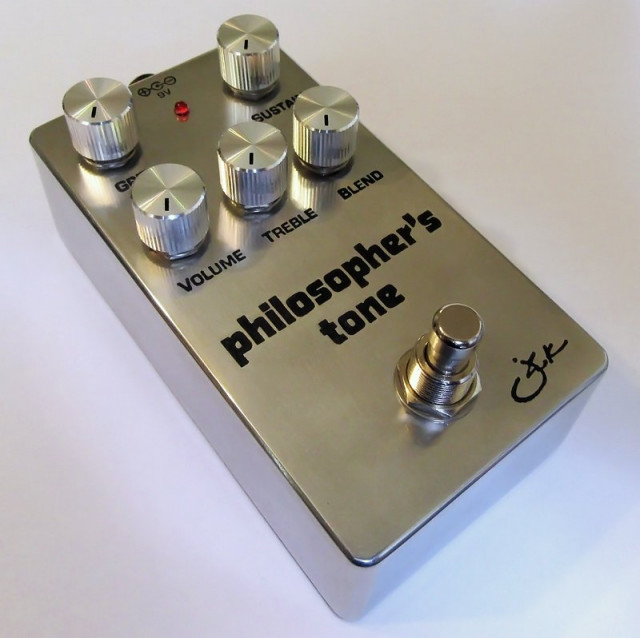 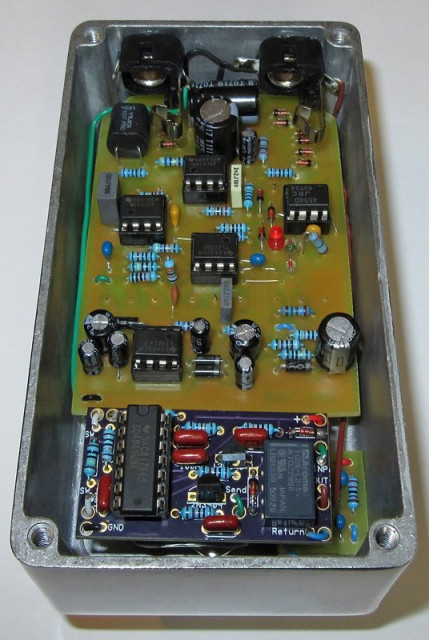