I can't find schematics or internal pics of the actual commercial Hermida Mosferatu.
Could someone post links, pics or .sch? Thanks!
Top

I just found this:

No idea, if it is correct...
Layouts
Top

...but for my ears a Zendrive with a larger gain pot (1M instead of 500k) sounds more interesting
Layouts
Top

They say that this schematic is an old version, much distant from the actual commercial version...

Interesting schem. dual gain stages and soft clipping for half the waveform and hard clipping for the other half. Could be fun to tweak around with.

I wonder why they call this pedal Mosferatu????

I wonder why they call this pedal Mosferatu????

That is NOT correct. I believe that was some early incarnation of the Mosferatu which Hermida allowed people to see, but is not the final form at all. He has said in the past that the Mos and Zen are related and that the Mos was created on the way to the Zen.
Top

That is NOT correct. He has said in the past that the Mos and Zen are related and that the Mos was created on the way to the Zen.

So there isn't any dual gain stage...

It has been a long time since I have thought about this...so any corrections are welcome.

As I recall, he gave that schematic out on another diy forum and said it was an earlier incarnation of the Mos. I believe it was shown to demonstrate something about a MOSFET clipping arrangement.

He goops his pedals, so I don't believe he would release any final schematic. From what I remember, then Mos has mosfets+germ diodes in anti-parallel in the negative feedback loop of the opamp like most overdrives. The Character control changes the pre-gain frequency structure in the negative feedback loop, and the tone control is similar to a Rat. I no longer have a Mos to tell you for sure...although maybe someone else here can chime in with confirmation or correction, but I do know that that schematic is not correct to the production Mos. I hope that helps.
Top

Forgot to mention, the schematic shows dual gain controls plus both post-gain treble and bass controls, which obviously the Mosferatu does not have.
Top

If I were to guess I would say the Mosferatu is a Zendrive with mosfet clippers only. It definately has a little more gain.
Top 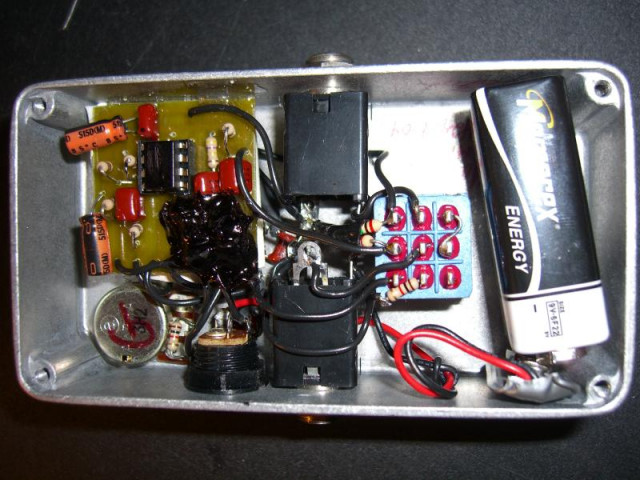 But what is the reliability of this schematic?
Top

this isn`t the first tubescreamer i traced....

i traced the older 3-knob-version. "vioce" is just a variable resistor for R5 (lok at the zendrive)

about the other "mosferaut"-schematic, i asked alfonso some years agoo about it. his answer:
> That design has nothing to do with my commercial product. I just liked the
> name so much that I decided to use it in the unit that I make.

I'm guessing here, but if you look at the voice pot on the zendrive and transfer that idea to the mosferatu, I don't think you're that far off...
Top
Post Reply
29 posts