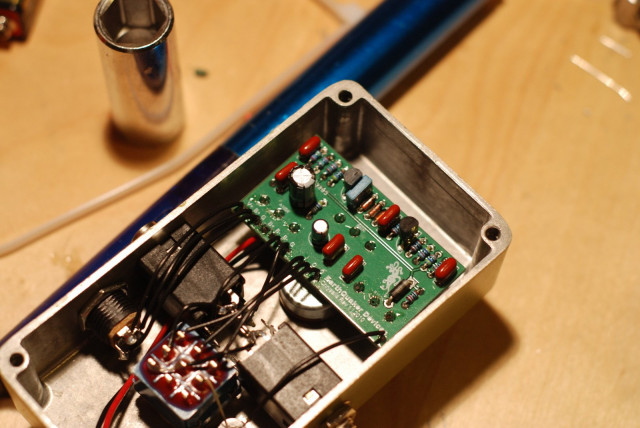 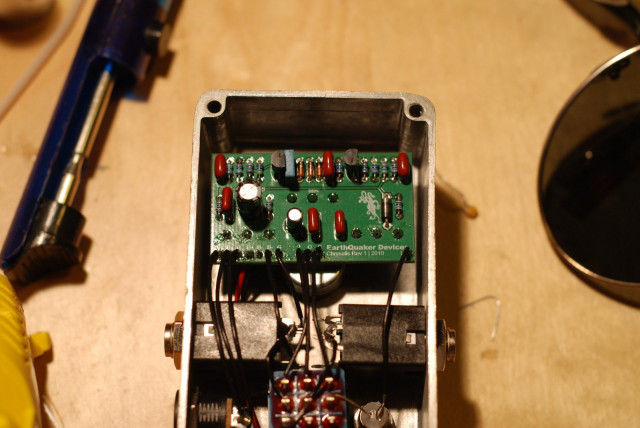 Capacitors from left to right:

The overdrive sounds great, reasonably priced, and well built. Would love to figure out what goes on in this one!
Last edited by culturejam on 05 Jul 2011, 12:58, edited 1 time in total.
Reason: Attached photos (so they don't go missing later)
Top

pics of the trace side?
Top

It *almost* has a Jack Deville quality to it.

I'll try and get some trace side pics around Wednesday. It's on my practice board right now but I should be free to take it off and open it up sometime later this week.
Top

It's going to be difficult to see much with the pots soldered on like that, unless your prepared to remove them. You might be able to bend them slightly to expose the traces.
Thanks for the pic.
Top

Looks pretty straight forward. MPSA18's are a interesting choice for a overdrive.
Top

Lawnchair wrote:Looks pretty straight forward. MPSA18's are a interesting choice for a overdrive.

High gain transistors in an overdrive remind me of this.

I wouldn't say it's too far off from Martin's Folk Driver in basic design. It definitely does have that "chewy" discrete sound.
Top

the fact that the folk driver uses nfb as well as pfb makes it pretty unique. I wouldn't be surprised it was more along the lines of this-
http://www.freestompboxes.org/viewtopic.php?f=7&t=12875

most likely two BJT stages and assym clipping, or possibly with the clipping in between the stages by the way it looks laid out.
"You've converted me to Cubic thinking. Where do I sign up for the newsletter? I need to learn more about how I can break free from ONEism Death Math." - Soulsonic

Any updates about this one ?
Thanks,
Mich P.
Top

so this was discontinued earlier this month. Maybe now's a good time to get a hold of this schematic?
Top

Any chance we can revive this one? Anyone out there that would care to trace the circuit? T'would be much appreciated.
Top

Anyone ?
Thanks,
Mich P.
Top

In absence of replies, why not at least look at what is indicated on the pcb? I don't see any resistors of value 2m2 (red/red/black/green), so it's probably not built up from either an Electra or the Folk Driver. The caps look like they'd all be similar in value, and there are enough to indicate that they are needed for something like a Big Muff-type of sustain control. The b100k seems to reinforce this. For something adjusting gain off the emitter, you'd see either a 1k or 2k pot, or maybe a 10k pot, biggest.

So probably most caps are value of 100n, maybe with 22n or so. There's a diff cap type next to the clipping diodes - probably parallel to it, and probably a value Earthquaker didn't stock in the Panasonic-types. So maybe has a value of 1n or 2n2 - again very common if taking clipping diodes to ground off the collector of q2.

50kb pot - probably tone control either of a Big Muff-type, or maybe just a variation of stupidly wonderful tone control.

Resistor values seem to be standard things with transistors used like with a Big Muff or LPB-1 - I think I see 100r's, 470k, maybe 220r and similar. Also 1k and such, unless I'm just not making out a 3rd or 4th band correctly...
Top

I bought a second hand one and traced it.
It was hard to trace the circuit because it is an multilayer PCB.
The ground connections and some others are on internal layers.
I traced the clipping diodes,a comparison of the reference diodes traces gives BAT48.
The the semiconductor analyzer read HFE=784@5Milliamps for Q1 and HFE=HFE=736@5Milliamps for Q2. 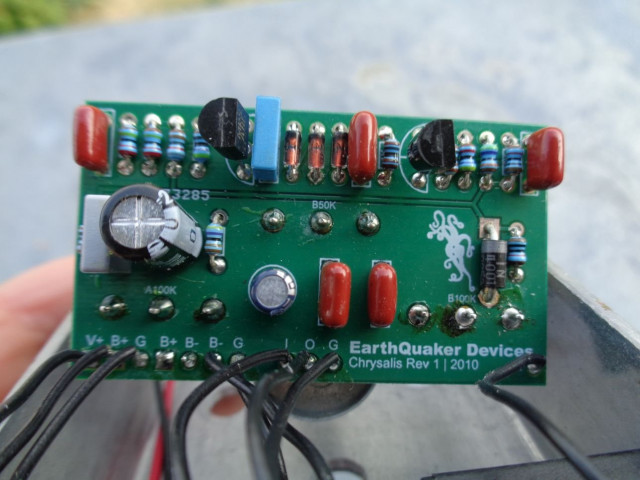 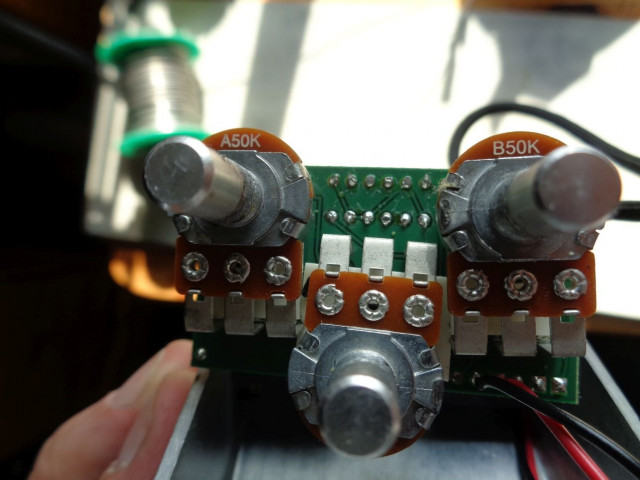 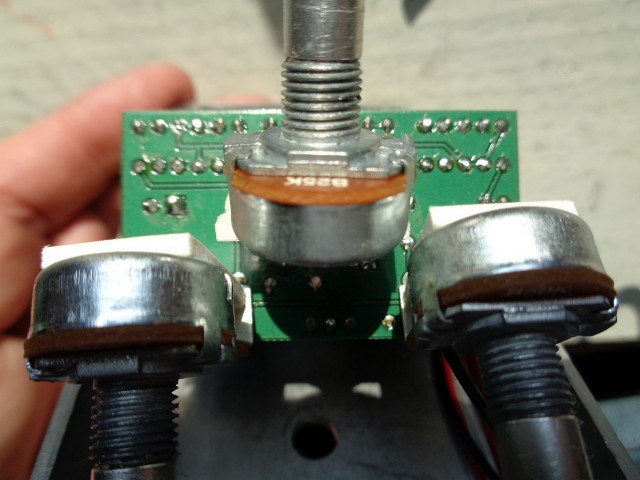 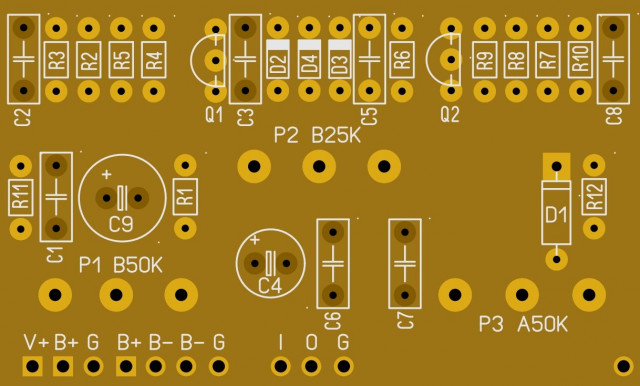 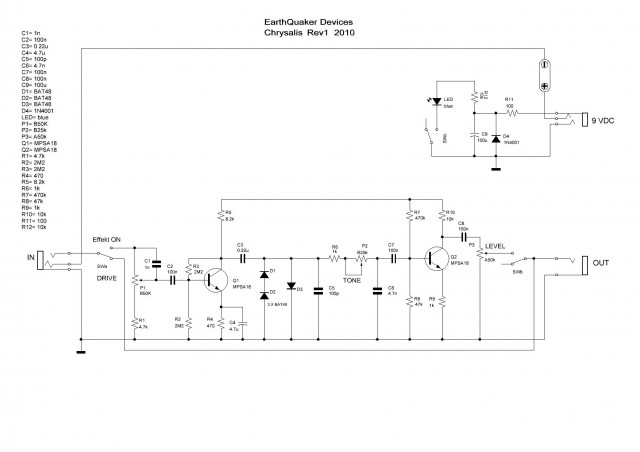 I designed a stripboard board for, but I haven't actually made use of it.

Print the PDF-files with the original size setting option. 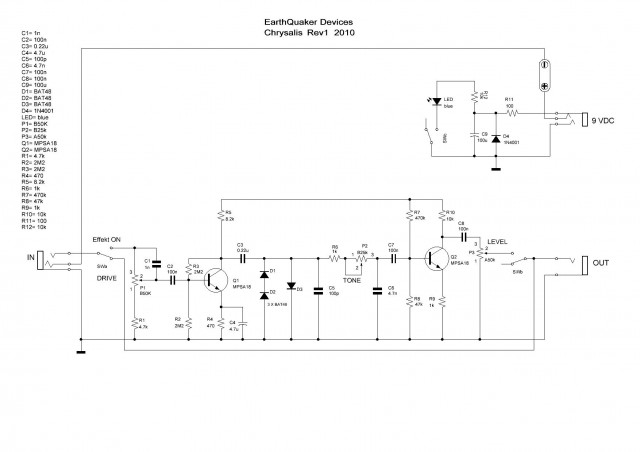