yes, the crappy treble response, and bass acting like a volume is easily fixed by moving that one connection, I actually had to do that on the first one I built and it works great. As for the funny voltages on the mosfet, dunno, maybe it's in backwards or your bias resistors are the wrong value.
Top

some mosfets have different pinouts.
"You've converted me to Cubic thinking. Where do I sign up for the newsletter? I need to learn more about how I can break free from ONEism Death Math." - Soulsonic

Thank you all for your kindness and help!!!

What I did, following your advices:
1. I modified the tone section as you said and now the tonestack works OK
2. I checked the pinout of the 2N7000 for 3 times (I tested the internal diode between S and D) and it's OK
3. I've tested 5 new 2N7000 and all had the same biasing problem.
4. I've checked the pinout of all 2N7000 using the internal diode between D ans S

Anyway, I will recheck all the resistors tonight.

Here's some pics of the one I just finished for a friend (after correcting the tone stack boo boo). What a freaking cool design, and clean build. Props!

Anyone got an idea about the low gain mod? (talkabout)
Top

neoflox wrote:Anyone got an idea about the low gain mod? (talkabout)

We've done it a few different ways, but right now we're keeping it simple. Break the circuit after the 10k on the input and after the 100K just before the gain pot and wire a dpdt to bypass/add the first stage.
Top

Hey, Neoflox, did you build this with the vero layout you made?
Ebay is a fucker ~ Sinner - If this is something unique, then I'm a teletubbie ~also Sinner
Top

Hi. No, I was eager and made a PCB right afterwards. It's 90% build but not yet verified either. Will post here when something works.
Top

sorry for the newby question, but what is the difference between the GND and the GND(T) ?
Thanks for your helps
Top

No difference, all ground points should be connected.

I made the low gain mod with a 3pdt footswitch .the only problem is that i have the usual POP sound when i turn it on/off.any suggestions?
Top

Here's my stripboard layout, plus RNFR's schematic with the fix. As you can probably guess, i didn't read the entire thread and drew the first version of the layout with tonestack pushing the output from bass pot's lug 2. Made a crude fix on my build, so the layout posted on this post isn't verified yet.

Gimp'ed the tonestack output to where it should be... 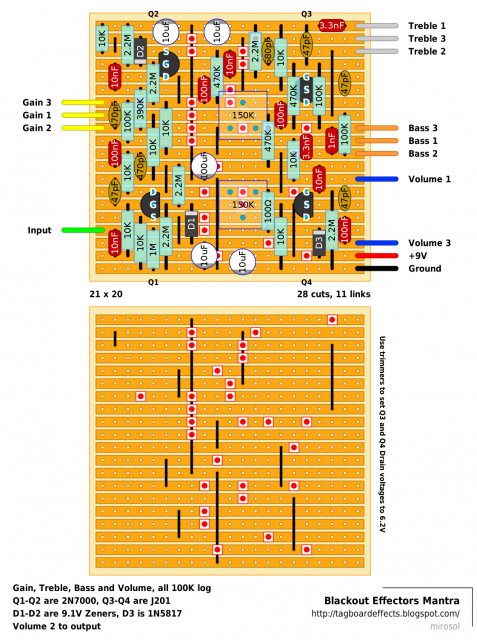 Hey guys built the vero and everything works but only problem is I'm only getting 1.67 volts on the source of the mosfets. Otherwise all my other voltages match. So the gain seems a little less than the videos I've seen. I'm assuming but maybe I'm wrong this is why. I've used a ton of different 2n7000 and bs170's. My question is would playing with the source resistor change the bias. I would just do it but I'm out of town away from the build and want a game plane when I get back, I've never really messed around with biasing mosfets. Thanks mike
Top

So the layout could then be called verified - Thanks man!

My own board has at least as much gain as the demos of the original unit, so your problem could be somewhere else too. My board has also a crude fix for the tone stack's output, so it's not 1:1 with the current layout.

But. If you want, you could try to tweak the 10K resistors from MOSFET sources to ground. Smalles value should give out more gain. You could just try placing some bigger value resistors in parallel to them to see if that works.
http://tagboardeffects.blogspot.com/
http://mirosol.kapsi.fi/
"No such thing as innocence" -Iron Chic
Top

Ok thanks I'll start with the 10k source resistor. There is gain just not quite as much unless I dime my guitar volume. So I'll play around with the resistor and report back.
Top
Post Reply
58 posts