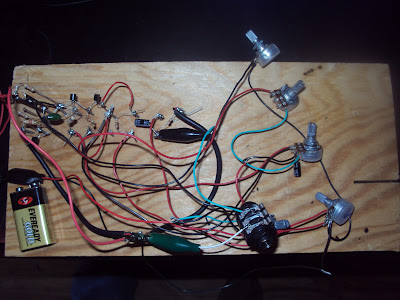 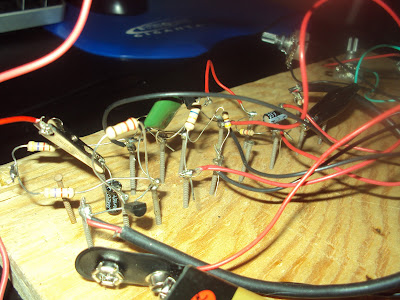 I built the first one from the factory de fuzz layout and it worked great off the bat. I built a second one and its a bit finicky and for whatever reason only works on the bridge pickup of my guitar, it'll just cut all of the cool fuzz out leaving a relatively clean sound with annoying artifacts when on the neck setting. Has anyone had this problem before? My neck pickup is significantly lower in gain, btw.
Top

Well spotted, I missed it off.

I've added the C&E for each transistor now, you would have had to have checked the schematic to find out.

If you look at C1,2,3 you'll notice that one side is slightly shaded, that's the negative

). On the schematic, GATE3 and COMP3 are joined - this connection is missing from the vero layout.

What do you think?
Top

I think the assumption is that the connection would be made offboard...
Top

Sorry, I meant 'COMP3 and DRIVE3' should be connected... not GATE3... effectively connecting one end of the 47K resistor to the emitter of Q3.
Top

I think tommorowish I may re-do that layout it was my first in that style and i'm not so sure it's gunna work out well... hold on tight.
Top

hi boys, i did some FF clon and made some video clip.
could Anyone say to me if this sound is near the original?
thanks a lot.

hi there!
i need some help

i made an ff clone using this pcb
http://membres.multimania.fr/davpseudo/ffactorx.htm

i did everything as shown except from C3(i didn't have the 0.1uf-i used 0.047uf)
i get no sound at all
just some scratches and also i can hear the volume pot reacting when i turn it all the way up...

is this pcb verified?
has anyone build it???
Top

just fixed it...
i've put the PNPs in a wrong way
Top

thieves wrote:just fixed it...
i've put the PNPs in a wrong way


I downloaded a schem and seems the same from other sources so I guess verifired... I have to solder just the transistors and it seems on that french layout we're using the orientation is the opposite. How did u install them? I think the emitter is actually the collector.

Last week I completed my 2nd Zvex style effect, this time using the Fuzz Factory "Factory de Fuzz" modified vero layout.
I think this is the smallest vero layout around. Anyway, it worked for me 1st time

I built this up using shitty cables and checked it worked.
I dont have any AC128 or similar, so on some recommendations I replaced those Ge's with Si BC558 PNP transistors.
This thing acted like a radio antenna, but it was just on the desk.

I subsequently boxed it up with some nice parts, Neutrik jacks, Alpha pots and footswitch (Mill Bypass)
It sounds mental, which is 90% what a Fuzz Factory is about. Whether it sounds close to the real thing, I dont mind for now.
Damn, this was a challenge to fit into the small MXR style box; Ive only made SHO's before this.

Anyway, when boxed up, it was acting even more like a radio box, so I put some Van Damme screened cable on the input and that solved that. I could do the output too, but it seems overkill, as the problem is solved.

thieves wrote:just fixed it...
i've put the PNPs in a wrong way


I downloaded a schem and seems the same from other sources so I guess verifired... I have to solder just the transistors and it seems on that french layout we're using the orientation is the opposite. How did u install them? I think the emitter is actually the collector.

ok the mistake on this site's layout is the pin orientation of the 2 germanium and also that the pcb they posted i think should be flipped.
apart from that the schematic and the layout is correct so if u still got the circuit u should be able to correct it.

also if u dont like the huge osciliaton the normal mode zvex has try to attach a double 2n3904 (just connect the 2nd on the normal one).

could explaina bit more about this 'double 2n3904' business? i don't get it, but i hate the uncontrollable oscillation this thing churns out.
Top

poodlebra wrote:could explaina bit more about this 'double 2n3904' business? i don't get it, but i hate the uncontrollable oscillation this thing churns out.

it's simple
you just solder 2 2n9304 (emmiter with emmiter e.g.) and then you solder them on the pcb just like it was only one

ps. you loose some of the weirdness of the effect

this is how it sounds
https://www.youtube.com/watch?v=0pMU0OkMVdU
Top

I've scored few PCB's from Brian yesterday including this. I never was in need of having FF myself but the price of fabricated PCB was so low I couldn't resist myself from getting one. Anyway, I have some cool metal can CVxxxx with no leakage and perfect hfe for Q2 and Q3, but I have no 2N3904 at all. I was thinking to use NPN Ge I have (OC140). Should I use what I have, or move my ass and get some 2N3904? Or perhaps I should go to fuck and go throughout all 44 pages?