Did a search but didn't find any info on it here.

Anyone ever see one, open it up?
Supposedly it's similiar to the Jellyroll but uses a silicon transistor to drive a FET?
just looking for something different to build.

drewl wrote:Did a search but didn't find any info on it here.

Anyone ever see one, open it up?
Supposedly it's similiar to the Jellyroll but uses a silicon transistor to drive a FET?
just looking for something different to build.

I remember this well, I could have sworn there was a thread - Maybe it was a request that was never fulfilled so got deleted.
Anyway, I really liked the demo and was interested in building a workalike, but never got very far. However, I saved a description of the circuit from Lumpy himself:


Lumpy wrote:The Lemon Drop uses a similar idea as the Peppermill to push a JFET into overdrive,
but it does it differently and I didn't get the idea from the Peppermill either.
If the idea of overdriving a JFET is unique to ROG, then I guess I'm guilty.
The input stage on the Lemon Drop is a BJT, not a MOSFET.

It's practically the same as the 7 Series input stage simply biased for 9V.
Transistor is a BC108B rather than BC107s used in the amp.
As simple as that sounds, it's what makes the pedal sound the way it does.
The JFET is a 2N5457, similar stage setup as the Peppermill,
but that is so basic anyone could come up with that...
The tone control is set up like a range control on a Rangemaster copy.

There were 2 custom versions that were built with the 7 series tone stack.
The original prototype was a little more complex utilizing more features
of the 7 series preamp but it never quite got the sounds of the amp.

I've attached some relevant schems that I used as a starting point. 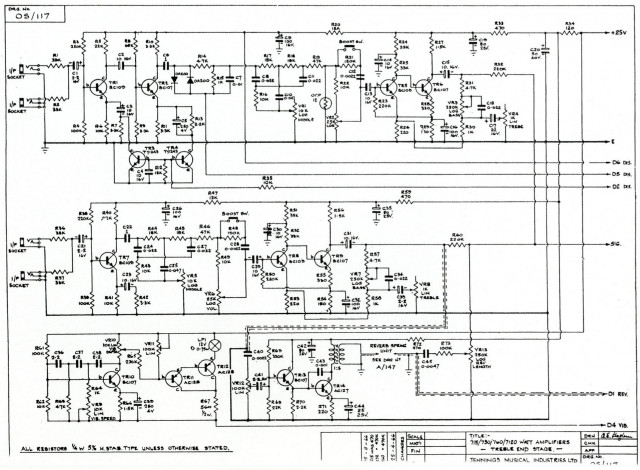 Aha, the thread is over at DIYSB, that's why I can't find it here:

If I ever get the time I want to build a 7 series preamp to go with some tube power amps I have that are similiar to the 7 series output section.
Someday, before I die

No problem: I think the upshot is that the Lemon drop is just a single BC108c stage taken from the 7 series input and adapted for 9v bias, driving a single 2N5457. I couldn't get anything but farty fuzz, but I know nothing about biasing transitors. I'd love it if someone could suggest a suitable bias arrangement for the first BJT stage.

Necro Bump. With Lumpy awol, has anyone thought about giving this circuit another look? Would be fun to build and tweak.
Top

sciencefriction wrote:....has anyone thought about giving this circuit another look?

If anyone could post gutshots, that would be great.

sciencefriction wrote:....has anyone thought about giving this circuit another look?

If anyone could post gutshots, that would be great.

I don't own one anymore, but here are some images I found online. Looks to be some variations between them.

sciencefriction wrote:Necro Bump. With Lumpy awol, has anyone thought about giving this circuit another look? Would be fun to build and tweak.

How about starting with a Peppermill, substituting a bjt for q1, and changing component values as needed?

You could always get into the particulars with the tone circuit and biasing a 2n5457 instead of j201 as the tweaking progresses.

While I'm probably wrong, I don't think that q1 plays as big of a sonic role as q2 does. That said, a mosfet will have different gains, and a different input impedance, than a bjt will, so I think those will probably be the most significant differences.

So - depending on how much overdrive comes from the jbt/q1 itself, you could probably just start with any semi-standard configuration. Maybe something like a LPB-1 for the first round of tweaks? Or maybe the booster stage from a Big Muff? Or a silicon Rangemaster variation?

Even though it differs from the Peppermill, it seems like the same basic idea is the same - q1 is driving q2. Most of the "magic" should be happening at q2, I'd think.
Top

Thanks for the pictures!

It makes sense if we assume it's vero, but I can't figure how the gain pot works:

That assumes the filter is between the two stages, and is a cap blend between the orange cap straight from the collector (under the drawn-on brown wire, presumably > 100n) and the ceramic cap below the BJT (small, 4n7 or something, direct from the large orange cap to the FET gate). That would imply the gain pot involves the far-left electrolytic. That works ok, but I can't then understand why the gain pot would use two separate wires on lugs 2 and 3 AND a "stopper resistor" from lug 1 to ground. I also don't see a resistor from FET gate to ground (would normally be 1M or so, no sign of one).

Schematic in the works 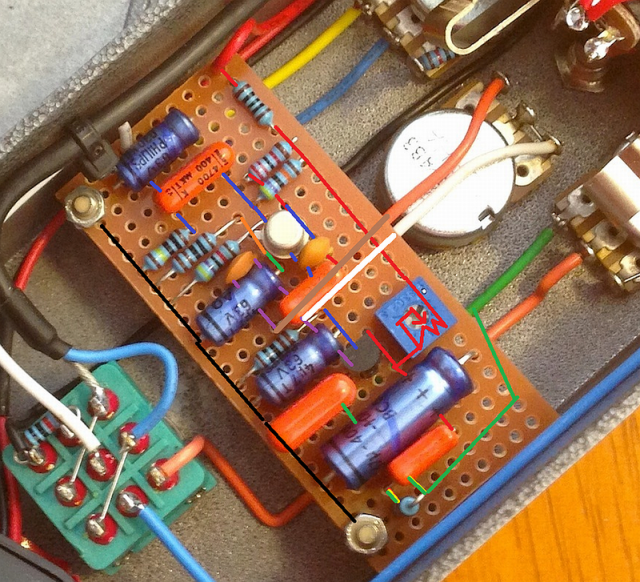 If they hadn't recently become so hard to get, I would get another. I want to build one and see if I can get it to sound a little looser. There were a couple with a pre-gain knob added, but I've never seen guts for that version. It's a cool build, but yeah, I'm not sure what's going on there either. If one turns up for a good price I'll grab it again.
Top

New guy here, been lurking/learning for awhile. I've built 20+ tube amps and a dozen or more pedals.
Picked up a ZII last week to try and help this thread along.
Here are a couple picks to help get this moving. I did trace it to the best of my abilities. Could only read one of the electrolytics but measured the rest in circuit with a cap meter. Ceramics are marked 471 and 10J, blue cap is WIMA 3300 100-U, orange cap 4700k, red caps .022uF. 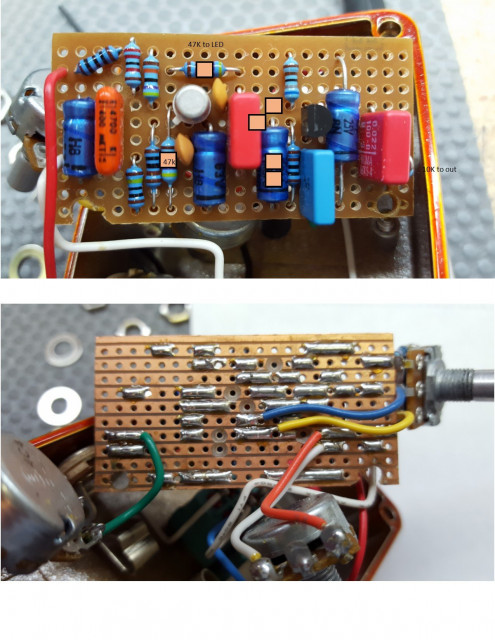 Schematic I came up with. Feel free to double check resistor color codes

Excellent work, many thanks! Could you measure the voltage on the drain of the JFET?

Hello, I saw there is a newer version of this circuit with a pre-gain, and separate treble and bass pots. Does anyone know how those fit into the posted schematic?

I have drawn vero layouts for both versions - FWIW I think the 3-knob version sounds better. I added a bias trimmer too. Easy enough to leave out. 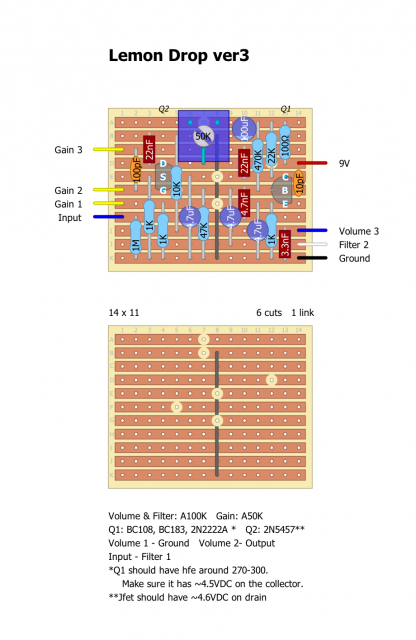 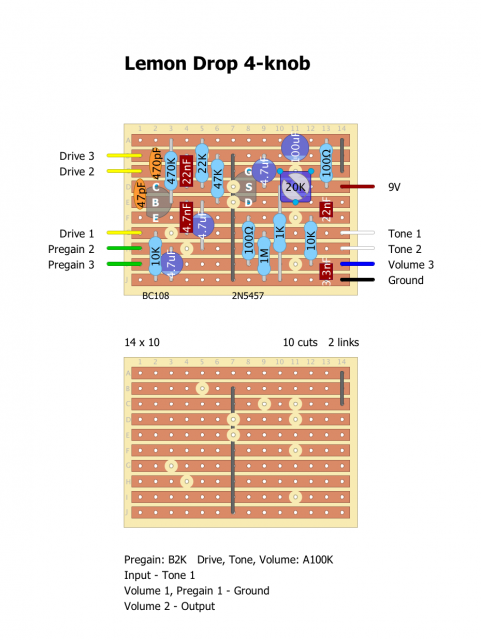