I had only limited time with one and was able to take this pic and write down all the component values. I took a pic of the values I wrote down, just ask if some cant be seen. I wish I could have taken out the pcb and got a trace side pic but it wasn't my pedal and they wouldn't let me. Maybe someone else can get a trace side photo or from the components piece together how it works.

Just bought the pedal. Anyone at all interested in gutshots?

What I remember seeing in there is a transformer, two LM386s and some other cool stuff.
Top

The traces are covered by the white laquer on the board, on both sides. The circuit can still be traced, but it's a bit hard to do from just photos. 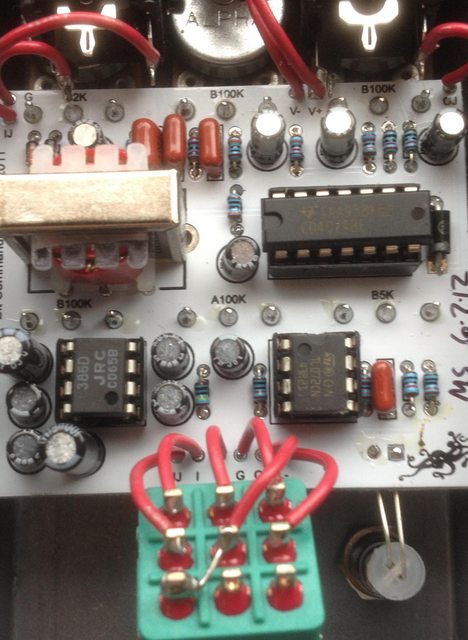 So maybe it is an input buffer (left opamp of TL072) which splits the signal to the octave up generated by LM386, transformer and diodes like Bob's Octavia below, with a parallel send to the CD4040 (is it? can't read the marking well enough) for the one and two octaves below like the Robot devil, then back to the other half of the TL072 for an output mixer.

I'm guessing the 386 has it's output tapped before the transformer to the B100k pot to provide the fuzzy "base" guitar (and maybe the send to the 4040 comes from here too), and I assume the filter control is just the 5k pot and the red cap to ground on the output for treble roll-off, just before the A100k level pot. Quite a cool little package, a bit like a dirty, much lower parts count version of the excellent Pearl OC-07 Octaver. 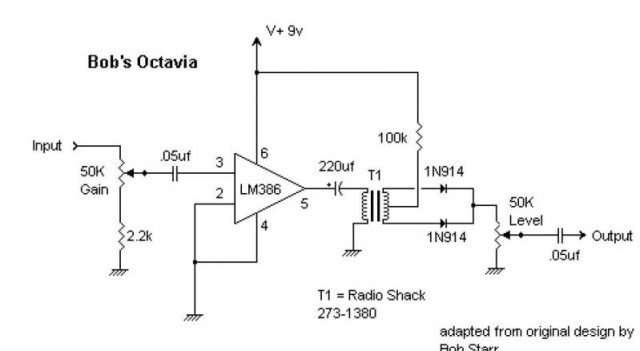 I've been messing around on the breadboard using the values I transcribed from the gut-shot and Nocentelli's ideas and it's getting quite close to the original, though I'm starting to think that there are better circuits out there that do the same thing.
Top

I'll try and open up mine sometime soon. Maybe I won't have a white silkscreen on it.
Top

I've posted links to the images, I can't seem to link to the thread containing them or subsequent discussion directly, hope IvIark doesn't mind.

I wonder if the transformer and 4024 could be replaced with the bjt phase-splitter from the Green ringer and 4040? (i have the latter but not the former)

unverified vero layout recently added.
"be a good animal, true to your instincts" (d.h. lawrence).
"there is no excellent beauty that hath not some strangeness in the proportion" (francis bacon).
"ni dieu ni maître" (anarchist slogan).
Top

Here's a perf and PCB layout of the Bit Commander. I used the same schematic TabbyCat posted above (which I believe is verified). 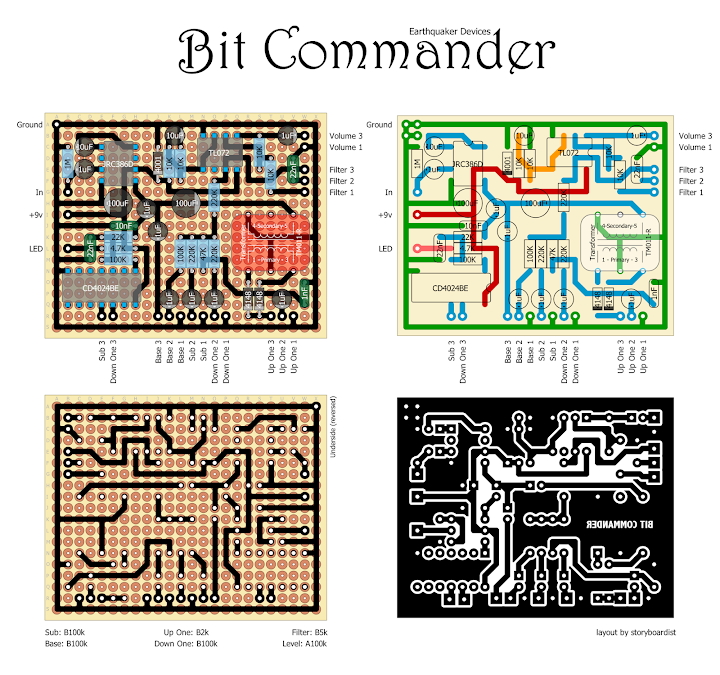 Can one just use the final two stages of a roger mayer octavia in place of the transformer? Cuts the cost a bit...
Top

kerbang wrote:Can one just use the final two stages of a roger mayer octavia in place of the transformer? Cuts the cost a bit...

I'm no expert but I tried a few circuit configurations and in the end I gave up and tried throwing my madbeanpedals slambox in front of the octave stage of an RM octavia. And well, it works for me. Haven't socketed diodes yet so on the off chance someone actually wants to try this for some reason.. yeah do that. I used Germ ones off the bat so who knows what 4148 sounds like. D3 is just polarity protection. Oh and I went with a 47n instead of 100n. Maybe I should have gone lower.. Suggestions for improvements would benefit me. Put an LM386 with clipping before it and tell me if it makes an amazing IC fuzz octavia.
Top

Schematic link is no longer working.
Anyone has the schematic picture pls ?
Top