I believe this is his so called Anniversary edition ,
it has a smaller control under the boost level that's labeled " dynamics "
Any guess as to what it does ? something else in the feedback loop ?
Top 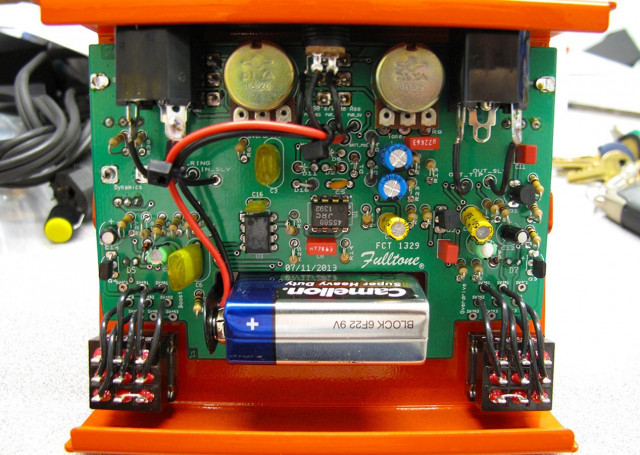 DYNAMICS knob (#10): This knob is part of the BOOST circuit, and only is functional when the BOOST is turned ON. Turning this CW will start to bring in a subtle Germanium diode limiter circuit, there is no right or wrong way to use this, choose your setting based on how it makes the notes “feel” when you pick the strings.
WARNING! If you turn this knob too far CW it will actually start reducing your volume, just like a studio Limiter/Compressor can do Use taste when setting this function, I find that the ideal way to set this is to first set the DYNAMIC knob to the desired “feel,” and then adjust the BOOST knob to desired volume
http://www.manualslib.com/manual/935797 ... tml#manual
http://www.turretboard.org 4 life!
Top

They have a separate booster pedal " 2B " now that seems to the same boost circuit
Anyone tried one? Is it a feature worth adding to other boosts?
Top

It's just a pair of antiparallel diodes in series with a resistor and pot in the feedback loop of a non inverting op amp stage. I traced the whole thing forever ago but seem to have lost the schematic. Just build a basic full range op amp boost and throw four components in the feedback loop for essentially the same thing.
Top
Post Reply
5 posts • Page 1 of 1