roseblood11 wrote:Try this on the zendrive, I guess it's the "Simble Mod"...

Hi,
Still use the asym bat41's then?
Thanks!
Top

Noticed that a friend had one for sale, so being an unemployed broke ass f**k that i am, i first tried to trade it in. I made my intentions clear in the first message i sent him, so he agreed to lend it to me for a few hours. He sold his unit already and he'll be shipping it away tomorrow, so i only had two hours and i drove ~65km to get it. As soon as i was on my desk with the pedal, i opened it up. Damn. All this to see a board with goop + sanded semiconductors.

So here are some photos i managed to get. Could be enough to determine the topology, but not nearly enough to do a full trace. Like i said. It's a friend's unit and he sold it to someone else already. So yeah. I'm not going to even try to degoop it. Guess it's time to drive another 65km to take it back. 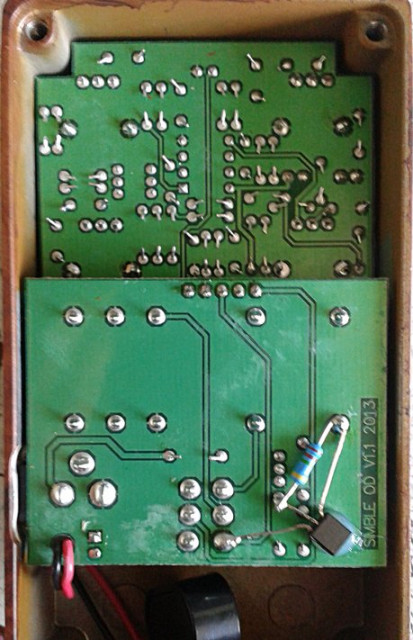 This we've all seen before.

Shot of the gooped main board's component side. 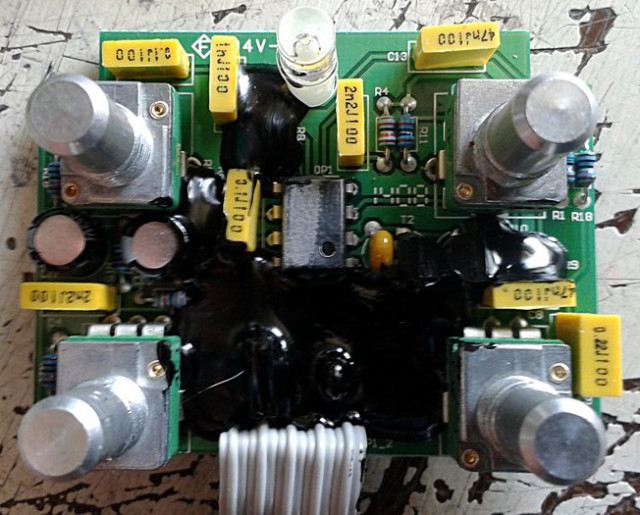 Another shot of the gooped main board's component side. 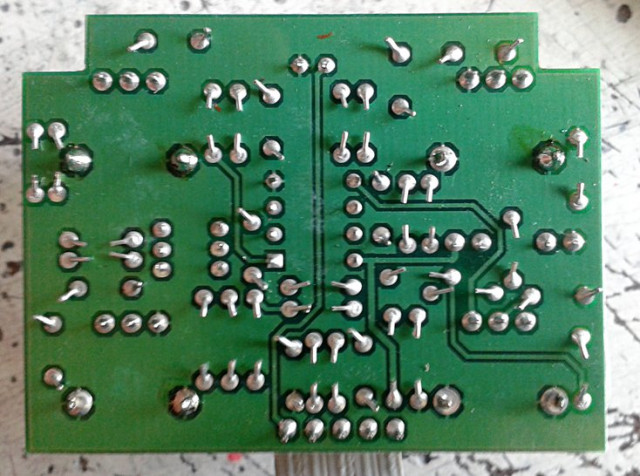 Main board, solder side. 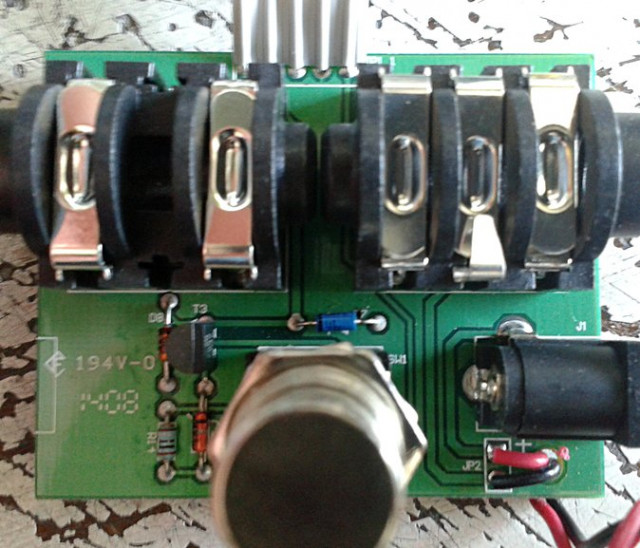 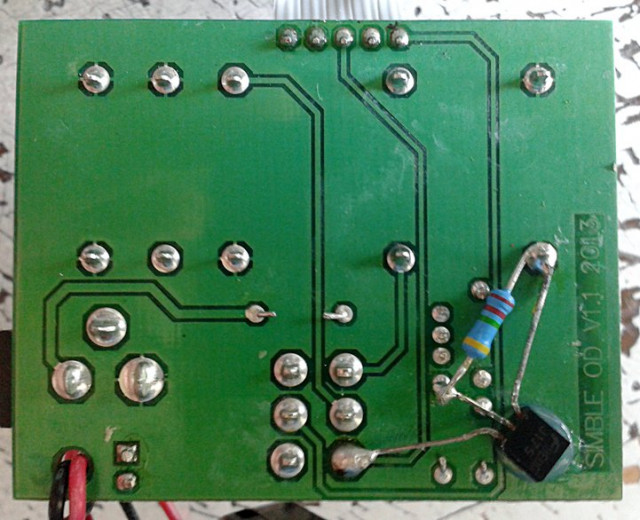 Switch/jack board solder side with that peculiar last minute fix. 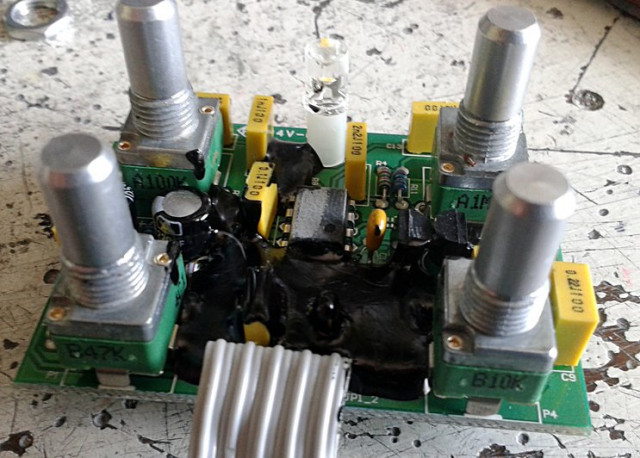 You can see the pot values on this one...

Oh no! Unlucky man. I bet someone here will still be able to see what it is (with a bit of luck).
"If anyone is a 'genius' for putting jacks in such a pedal in the only spot where they could physically fit, then I assume I too am a genius for correctly inserting my legs into my pants this morning." - candletears7 - TGP
Top

Due to goop (and the sound), i'm hopping into the bandwagon guessing it's slightly modified Zen. Or why else would they try to cover it up..
http://tagboardeffects.blogspot.com/
http://mirosol.kapsi.fi/
"No such thing as innocence" -Iron Chic
Top

Yeah next to pin 1 and 2 is a small cap probs around 100p and 2 transistors which are quite possibly 2N7000 in the feedback loop for clipping. I will have to have a closer look to see what I can see, but it definitely looks quite zen like at the moment. Mad professor usually has something quite unusual in there circuits though so it would be good to get the goop off and have a better look.
It's fairly straight forward, if you want to start it , press start. You can work out the rest of the controls for yourself !

No silicon heaven ? preposterous ! Where would all the calculators go ?
Top

MoonWatcher wrote: Does Mad Professor goop their stuff any longer?

I have suggested no goop on the Mad Professor pcb series and none of my designs therefore have that. On the HW series there was a problem with the neoprane they used being too thin and so factory suggested they'd use a rubber housing which I think is good since it makes any short circuit impossible. I will say it does make a little pain to set bias precisely exactly nice on the HW MYT and also bias on TOP-setting either of those perfectly is easiest by ear while not so easy instruction for someone to set on a scope. This means MP pcb designed by me have no goop and no sanded parts, MP HW series designed by me if older edition is wrapped in neoprane and rubberband and later editions have a plastic container that the pcb rests in. Generally pcb models have the latest upgrades since changes can only be done when pcb is remade.
So actually when asked by MP crew if I'd like pcb or part of pcb gooped I have asked them not to do so

I did play the Simble at NAMM and thought it sounded like something lots of people would like. Subconsiously and soundwise it reminded me of a Zendrive but it did not do the fluff at the end of notes that the hardcore Zendrive guys swear by.

At your service
BJ
BJF Design
Aka Mad Professor himself
Top 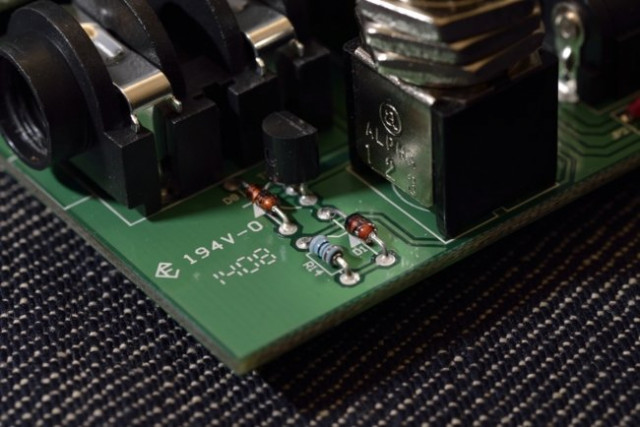 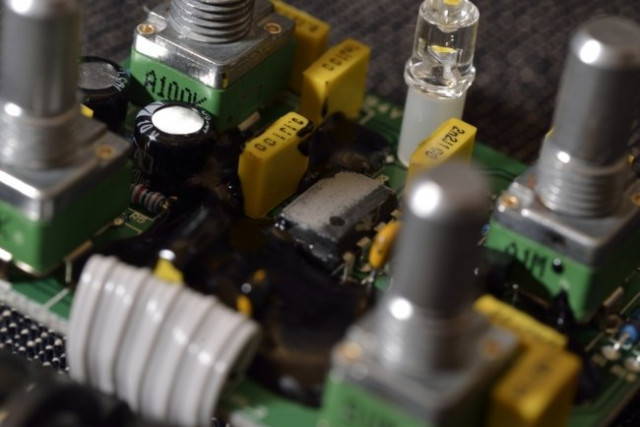 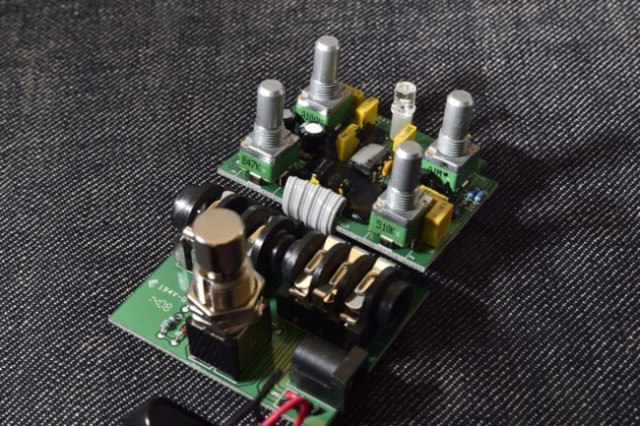 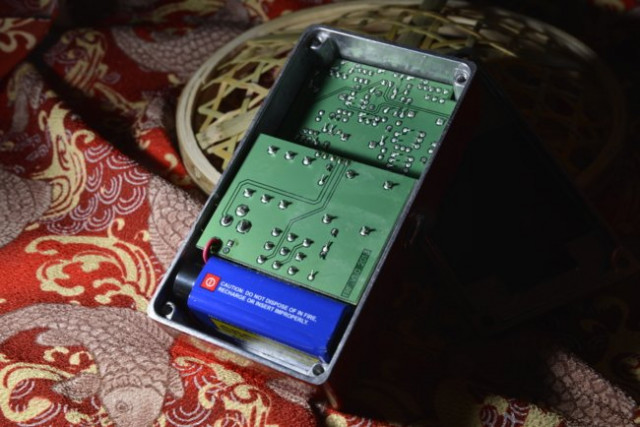 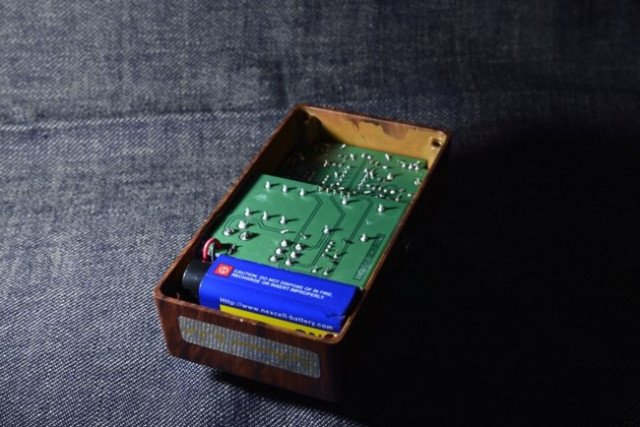 Indeed this is a a Lassi Ukkonen design and in that it is a Simble and not really a Mad Professor pedal.

I'd say I know nothing of this pedal other than I have played one- Simble.com would not share the schematic with the designer of MP Amplifications

You might then ask why I'd still design for MP and the answer would be they owe me years of investments.

just a glance at it and it has 8 poly caps...aside from the usual feedback loop and electros...zendrive has only 4. there's something else going on here...
Top

i suspect this is similar to the barber tone pump without presets for mids or bass...and mosfet clipping.
Top

This needs to be degooped. Sadly the price of even beat, used units is a bit steep for me.

Wonder if MP owes still a lot to Björn...
+m
http://tagboardeffects.blogspot.com/
http://mirosol.kapsi.fi/
"No such thing as innocence" -Iron Chic
Top

tried one today, wow.
is there a schematics?
Top

Wow this one wins the prize for longest time without reversing in fsb!
Top

And still retains its crown. No tracing yet...
Top

swt wrote:And still retains its crown. No tracing yet...

You are doomed to buy suspicious pirated PCB from forum members WITHOUT guarantee that they are 100% correct.
Who cares anymore!

There is no more freestompboxes here, haha!

OOo btw. ZENDRIVE sound better IMO. I have compared this two pedals,and this pedal sounds brighter and not so good as it is presented on the YT!
ZENDRIVE wins for DUMBLE emu!
Top

Schematics alone is a big help, especially for people like me who likes to draw our own layout or for fixing some broken stompboxes.

and some schematics are not shared by the pcb designers, or it takes a lot time before they release the schematics.
Top

This one was a fun one.

Aside from the goop there were a couple dummy traces like the one in the pic below, as well as a handful of decoy components.

I'll post a schematic once it's verified. (It's definitely Zendrive-based, just FYI)