I've searched the Net, and can't find any info about what it is based on.

I know Greer, and he'll never have an original idea, so i *know* it's based
on something. I suspect he's pulled a JHS and based it on something from
Runoffgroove.

If anyone has traced it, or knows otherwise, all thanks.
Top

I have no information on this, but wanted to bump this. Also if you know Greer maybe ask him about it?
Top

I no longer live in Athens, so I'm unable to ask him. Even if I could,
getting an honest from him about much of anything is next to impossible.
He's well known in Athens for being a bit challenged in the honesty department.

He told me with a straight face, looking me in the eye, that the Ghetto Stomp
was an original design all his own.
Top

I have found this on a japanese web: 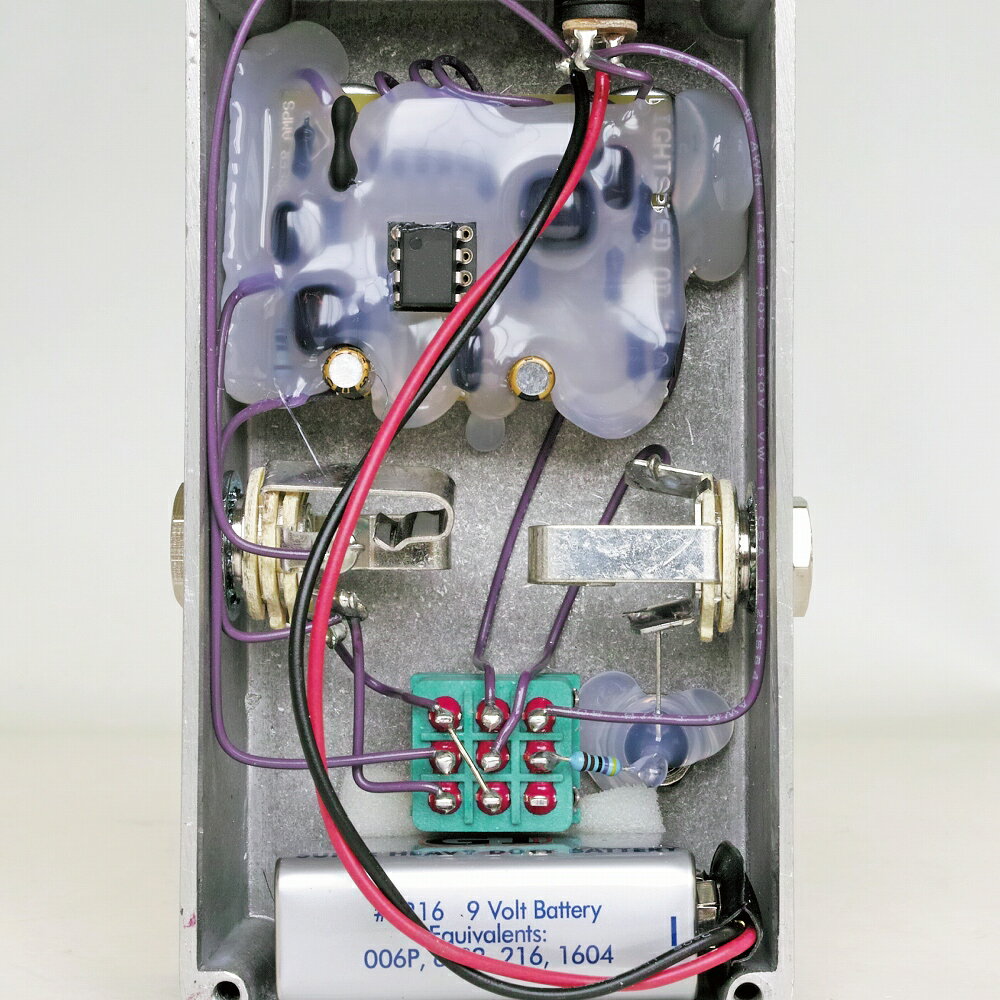 For the first five or six years he was building pedals, he didn't goop anything.
His gooping of pedals tells me he has something to hide now.
Top

I'd really like to see a schematic for this one. Maybe it's just a variation of the tube screamer, but a very good one.
https://www.greeramps.com/products/lightspeed
Layouts
Top

I'd really like to see a schematic for this one. Maybe it's just a variation of the tube screamer, but a very good one.
https://www.greeramps.com/products/lightspeed

Pedal PCB has it traced. It is a timmy with fixed eq controls, assymetrical clipping with 5 diodes (3+2) back to back and a simple treble roll-off for tone control at the end.

I have done a vero layout from PedalPCB's schematic, it is verified and sounds pretty much like the lightspeed.

Why invest in an expensive op amp ($ 4.30) for this application ?
Any dual operational at fraction of cost can be used in this overdrive without change in performance...

Things are boring these days. PedalPCB has everything already...
Layouts
Top

Is that just hot glue? Even the goop is unimpressive.
Top

Sure. Leave enough space for a rotary switch for various clipping arrangements. Or use a simple dpdt switch for two sounds. A dpdt on-on-on can be used for three sounds: One side of each diode combo is hardwired to the circuit, the other sides go to lugs 1, 4, 6 respectively. There's many combinations that sound good in this circuit. I tried germanium diodes, LED's an Mosfet Transistors, and all were useful.

Be aware that, besides the clipping options, the Lightspeed is a Timmy with fixed bass and treble controls AND a treble roll-off after the 2nd op amp. That might make some of the difference between single coils and humbuckers you said.
Anyway, you could make a regular lightspeed and put a spdt on-on switch to turn the "lightspeed" tone pot on and off.
Top

While I'm not a huge fan of the Timmy it's still a beloved pedal of many for good reason. The Lightspeed seems to be a way of taking a revered pedal and making it less useful. I built one to see what the fuss was about and found it altogether underwhelming. I'd take a Timmy over the Lightspeed any day.
Top
Post Reply
27 posts