Also still not sure about D11. I don't know what it's really doing and I'm not sure what it connects to on the cathode side. Looking at the board, it looks like it has nowhere else to go than C32 but this is just assumed.
Top

I guess I'll just keep obsessing over a grainy picture. It's like trying to put together a jig saw puzzle where half the picture is torn off the individual pieces so you can't reference anything except for the shape. I love a good jig saw puzzle!

Found a few more errors in the schematic after looking at it again.

There appears to be a Vref going to a via on the first set of diodes (far left side), looks like its going in between the two bottom diodes on the bottom portion, looks really weird on the schematic though so I'm not sure exactly where that's going. That first diode stage is looking really weird, and I still have very little confidence in that portion, and now even less confidence with that Vref connection to ??

What do you guys see for these? 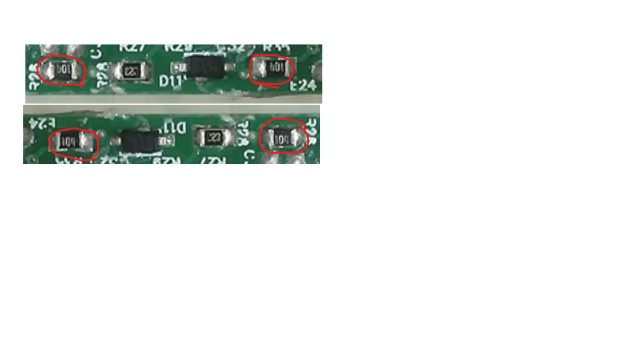 Looking at the main board, the 100k's they use appear to be the 4 number code resistors (1003). So that makes me even more unsure. Why switch to a different 100k type here? It's possible this is from a different revision from phasorman's pictures.

That said, 100k makes a heck of a lot more sense based on where I've been able to trace these to (granted a good portion of the connections are assumed), but i just can't tell from the grainy picture. Also I don't think C34/C35 goes to VR directly. It looks like they are in parallel with R35 which would cause a high end roll off after the clipping stages.

It would also make more sense if C30/C?? instead of being in parallel with C31 were just in parallel with R26 so you get the same or similar roll off as the C34/C35/R35 network on the last clipping stage.

I'm hoping someone else can chime in and enjoy this jig saw puzzle with me soon! I'll share what I have so far once I get a chance to update the schematic.

Also, I'd love for someone to talk to me about the clipping stages. It looks like once a voltage threshold is met either positive or negative, the diodes will start conducting causing voltage differences across the 10k resistors causing the diodes on the 'other side' to start conducting. Its like he made a npnpnpnp transistor out of diodes that functions almost like a FET with soft clipping knees and below unity gain. Is that an accurate assessment?
Top

Check out how a "Diode Ring VCA" works. Sort of turn the circuit sideways

Check out how a "Diode Ring VCA" works. Sort of turn the circuit sideways

Thanks bmxguitars! I'll do some reading on that.
Top

Here's the updated schematic I was able to trace... Still not sure about the input section, but the more I look at it, the more I don't think the input goes to that first set of diodes at all. Especially after seeing the Vref going to some via down at the bottom.

The diodes all have the marking "D1". The only thing I could find with that label are 3.3V zener diodes. Not sure if that has a big difference on the sound here. I'm not familiar enough with partsim to be able to make specific parts yet, but supposedly you can. ** as soon as I posted this, I see there are 4148's that are also labeled D1, and in the same style packaging... maybe there are other smd diodes with this marking as well.

Anyway, this is about as far as I could get. Still about a 75-80% confidence in the topology.

The high roll off (low pass) caps are likely low value in the 100-470pF range. Other caps I have suggestions in there based on some dumble schematics I was able to find.

R23/R26 and R47/R35 are compliments to each other and need to be small. Somewhere in the range of the Diode strings Dynamic Impedance to make the most of that non-linear section. 400 Ohms of the first drawing made sense to me. I would think less than 1k at any rate. I could be just thinking about this circuit incorrectly.

I was thinking the first diode string was the Sag circuit. AKA "Diode Ring Compressor" of which there is a design that should just be called a "Diode String Compressor".


.If this first diode string is Zeners, then It would make sense as THE Vref supply. That gives me an idea of how to design a Sag circuit though

Just needs an input resistor to divide the signal with. The voltage at the top of the string already sags with increasing input.

One of the more interesting circuits I've seen lately, for sure. Thank you for your dedication ambusch

Very cool info, I think the input section could very well have this kind of setup! It could make sense based on where they are physically and where vref comes through physically. I just can't tell from the pics to see what connects to what on the first section.

The problem with r35 or 26 being low is it goes straight to VR which causes very low output. It creates a voltage divider (where I was able to at least assume these connections) so a low fixed resistor here basically cuts the signal to almost nothing, which is why I was unsure about the value and placement at first.

I'll keep playing with the model and seeing what happens with various changes.

While it's all semi speculation at this point it's still really fun to mess with and learn about. It's a fair amount of parts but i think it's well within the realm of breadboarding and seeing "what happens when I do this" for at least the clipping portion of the circuit. If I can find the time Ill try to put a test board with some input gain and see what the clipping actually sounds like.
Top

Yes. Very interesting circuit. I have a simplified version on the breadboard using 510 Ohm resistors as dividers against the diode string dynamic resistance. It seems like I am getting unity gain even though I am hitting the front of the string with about 20dB. So you are right. I have read that Diode Bridge compressors can only pass 50mV or so cleanly. The Neve 535 uses a 2:1 step down transformer on the input followed by padding likely for this reason. That is for studio stuff though. We want to slam this thing!

I haven't measured what the useful dynamic resistance of of a four 4148 diode string is yet. That will be interesting. Resistor values will want to be the median. I'm looking at this circuit as series connected Diode-Bridge compressors getting slammed. To get any gain reduction, the dynamic resistance works as a voltage divider into these resistors. And I am assuming diode dynamic resistance is quite small.

btw. I think D11 is to simulated grid current conduction. Just a guess.

Have a great week ambusch!

After doing some modelling, with attaching that VR to the first set of diodes in various places, it somehow changes where the voltage biasing is at different stages. I've attached the schematic and outputs for Vref connecting to different areas, and the inputs and outputs at the 2 gain stages (post clipping). I only have .35V swings here so not a whole lot of clipping. Just trying to show "what happens when I do this". 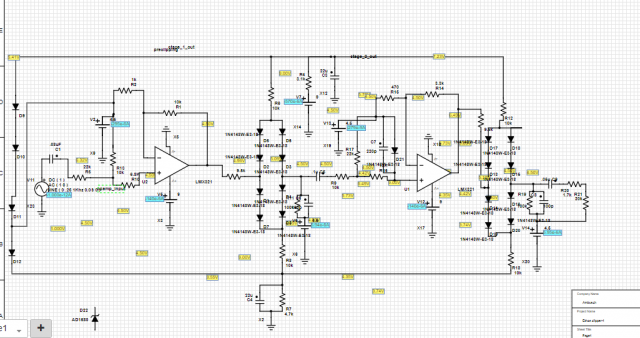 I think the "diode string" compressor could still be what's going on in the first stage. It would make sense to have that controlled distortion that supposedly dumbles are supposed to have. Also I modeled the preamp as well and with gain turned up it just slams the rails, so a compressor type circuit seems like it would just make sense... but that Vref connection to the first set of diodes has me and my model stumped except to correct (or purposely offset) output biasing of the clipping stages.

Still haven't breadboarded it yet so I still don't know what it will really sound like, but looks cool in the model

That is with the vref in the center. With vbias on the bottom portion, I could not get even bias even with 100k. This could be purposeful design, but it seems more likely it is set to be symmetrical and vref goes to the center.

But this likelyhood is based on my preference of more symmetrical clipping on paper. This does not take into account that sometimes some assymetry sounds better.

Bmxguitar you got any sounds from your breadboarding adventure? You'd likely need a small gain circuit (with volume control) into this circuit to get a really overdriven tone unless you have some really hot pickups! That or my assumption of pickup output voltages is off.
Top

Played with the model a little more. 10k for that positive voltage looks like it provides slight assymetric clipping and smooths out the clipping and provides a little more "sag". Vref to the center of the diodes string helps stabilize signal bias throughout the different stages. This does not exclude the possibility that signal connects to the string somewhere but im finding it unlikely based on the model.

I think it's 10k for the "positive" clipping rail based on that picture but I can't really tell. That or I'm just seeing what I want to see like a rorschach diagram.

Can't wait till I have some time to breadboard this and use my ears instead of my eyes.
Top

Ahhh sorry guys! I started it, but got sidetracked. Unfortunately I got as far as I could with the info I had then lost some interest trying other d style pedals knowing that I didn't have all the information for the connections on the left side of the board. Everything at this point forward would be just tweaking the circuit by ear to something I like, but would not be the actual schematic. Still not sure about those diodes on the left side of the board, how they are connected or anything.

Yes all links were dead when I started. Just the blurry picture on this thread and the detailed pictures from the other.

If your interested, I can finish up breadboarding and experimenting after the new year but it won't be exact.
Top
Post Reply
33 posts