So. There was one of these for sale as a defect unit on a local forum. Description said that there is "some bad contacts or something", but the price was realistic. I already knew this one will be gooped, but went ahead anyway. Got it in the mail and ripped it open as soon as i found the time to do so. Sure enough. Massive loads of clear and black goop. The only real issue with the unit was the standard 3PDT stomp, which didn't work properly. Now, i had it open on my desk and... Well. The pedal sounds pretty decent, big and somewhat cool with its high-ish gain. I didn't hear it like it would be a straight up clone of anything i know, so i was somewhat interested. Took my exacto knife, 12V spare iron, bigger knife and a few other tools out. About an hour or two later, i had pile of crap on my desk, but the circuit was finally bare. All it took was some moderate violence and lots of patience. I did break the power supply current limiting resistor, 47p cap at the feedback loop and also did some damage to the power filter cap. Replaced those and ordered suitable pots to replace the original ones (which are quite horrible). Now that the goop is gone, those standard angled pots will fit in there nicely. Did the trace, figured it should work, drew a stripboard layout and built it. Sounds exactly like the original. Well then a gain.. It's very low parts count design. Wasn't exactly what i was expecting. Simple, yet quite cool design. Fat TS clipper stage, followed by a Rat-like "tone" control, which is buffered - this followed by a standard volume control. IMO, this could have gained a lot more respect if it wasn't for the goop. Or the choice of pots. Funniest part is definitely the message left for me..

Anyway, here are the results.

And the photos. And the schematic. And the layout. 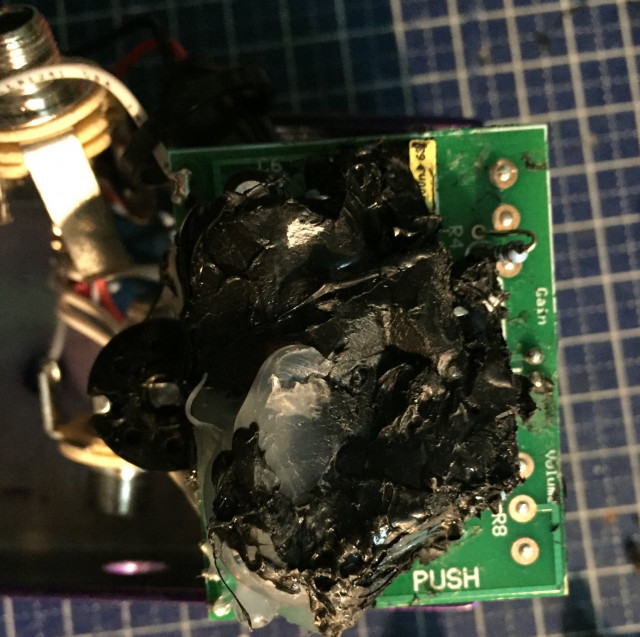 Photo from the middle of the process... 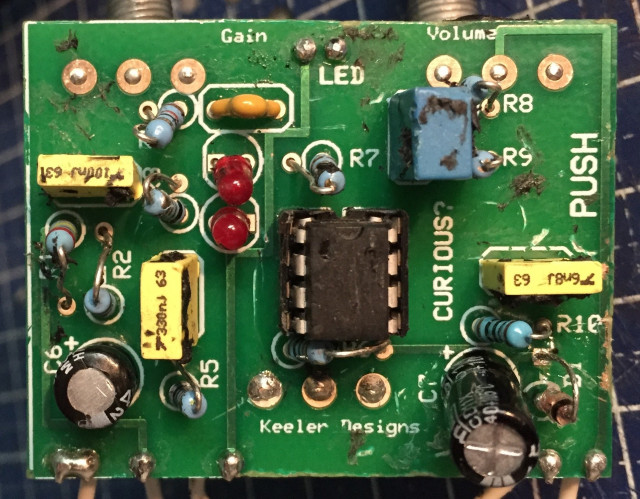 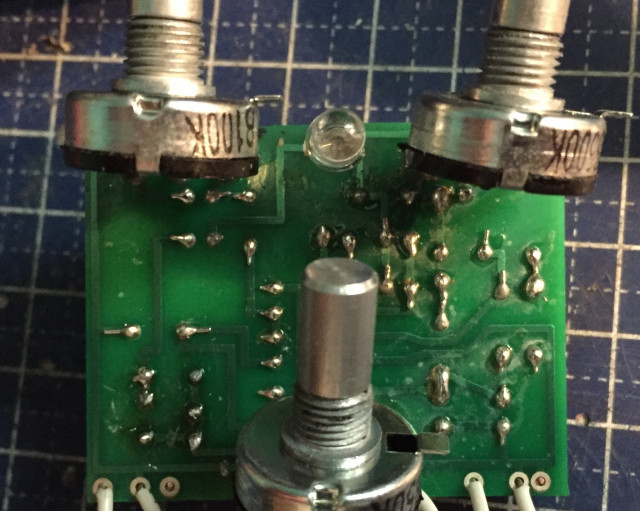 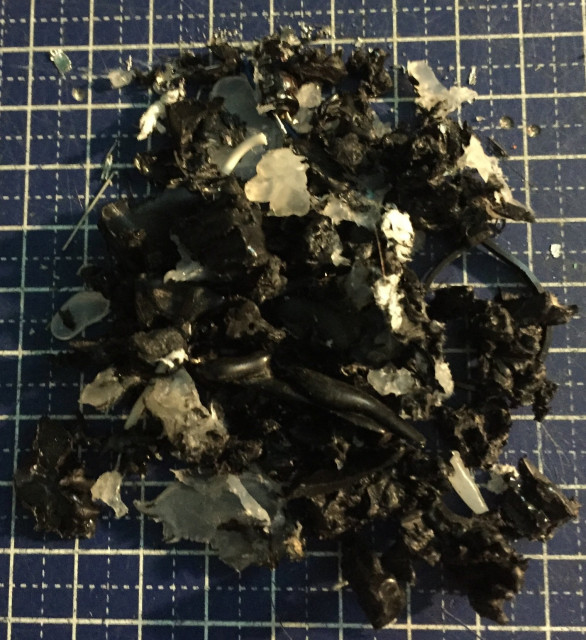 Pile of crap from the process. 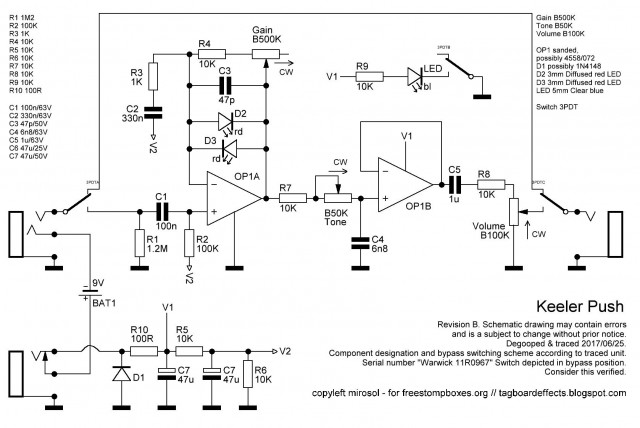 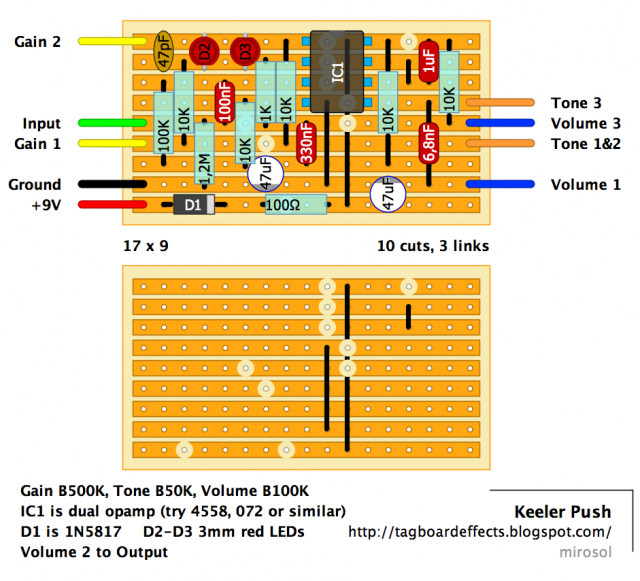 I find the silkscreen text of "Curious?" pretty funny... Only visible after de-goop...

I built this up at work tonight. Easy and very good sounding overdrive with a good bit of gain. I appreciate all your work mirosol, you are a champion among men.
Top

dv8r601 wrote:I built this up at work tonight. Easy and very good sounding overdrive with a good bit of gain. I appreciate all your work mirosol, you are a champion among men.

Which type of OpAmp did you install?
Top

I put 4558D in mine. No audible difference between the stripboard and the original unit.
+m
http://tagboardeffects.blogspot.com/
http://mirosol.kapsi.fi/
"No such thing as innocence" -Iron Chic
Top

I made board layout copy according the schematic and the shots and added the hidden tracks by guess. 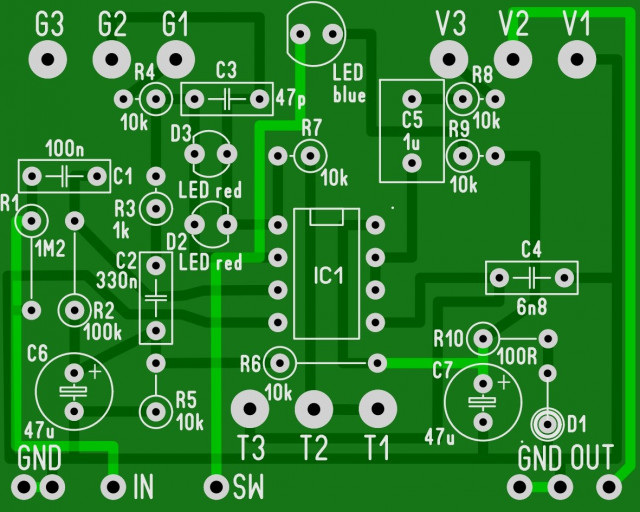 I made a single sided board version, the conducting paths on the components side were replaced by wire jumpers. 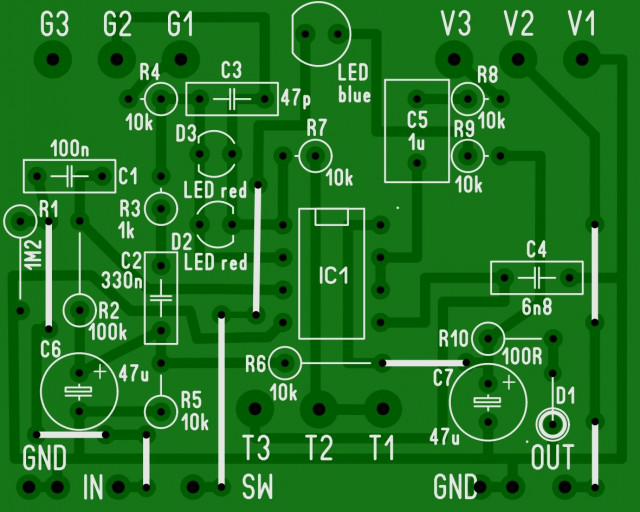 I had to tear down the goop on mine after plugging a 12v by mistake.
As you should see on the picture, the opamp on mine wasn't sanded and it's a TSH22IN.
I struggled a bit and I broke two resistances and the diode on the way (although I'm pretty sure it was dead already), but I hope I can fix it.
On the schematic, I think there's a cap that is mislabelled, C7 is there twice instead of C7 and C6.
However, both are 47uf, so it doesn't matter.

Thanks for the hard work mirosol, it helped a lot to see what was beneath the goop to pull it out. 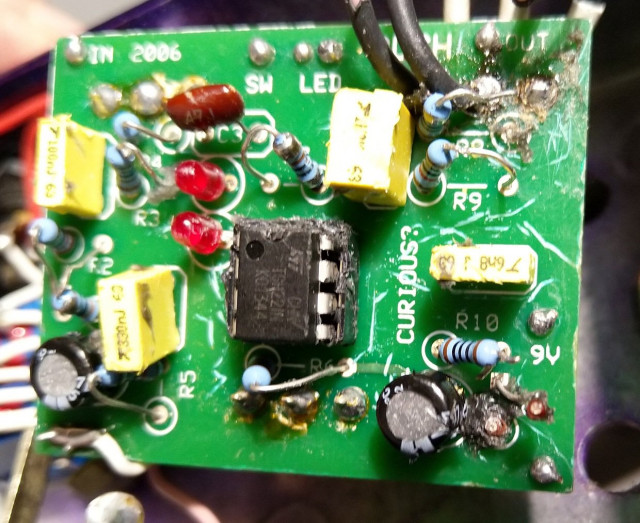 Hi, lots of hard work done here, but I can’t see a pad for the 9v connection on the PCB layout copy.

Also, on the vero layout, 9v enters the PCB and passes through a diode, then a 100 ohm resistor, but in the schematic the first diode goes to ground.

Hi, I worked it out.
On the layout copy, the 3rd pad in is not a ground pad, and is not joined to th ground pad to the right.
The 3rd pad in from left is 9v, and there is a topside trace that connects to diode (going to ground), and 100 ohm resistor.
Cheers, Rhandy
Top

Sorry, I forgot the 9V pad.
I added to the layout now. 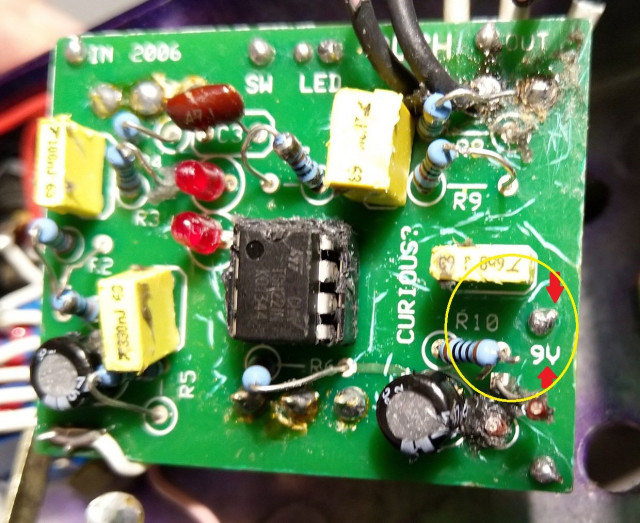 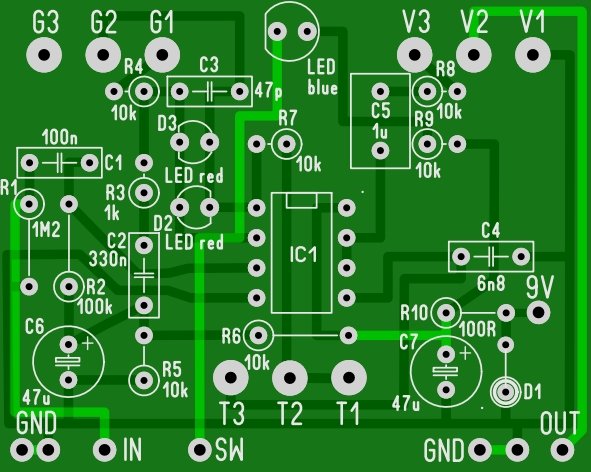 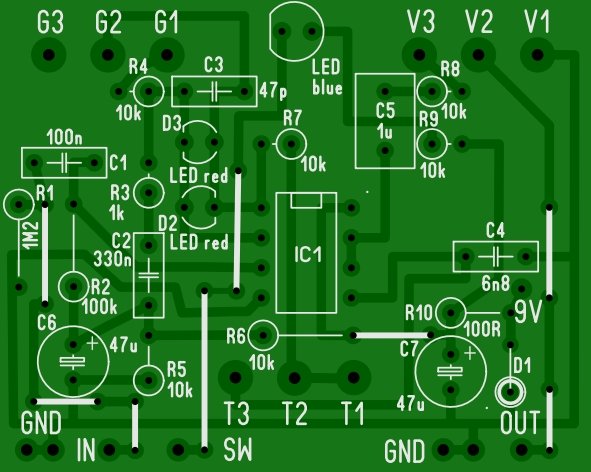 I built this - thanks Miro! It's a very cool sounding pedal but I seem to need to have the tone control almost full to be usable. Otherwise it's quite dark. Maybe I should try an audio taper pot there? Also thinking of reducing the B500K gain pot to B250K as it gets way gainier than I need.

Overall my Les Paul loves this pedal. It kinda reminds me of a cross between a Honey Bee and a Rockett Calibre 45. Cool overdrive indeed.
Top

Alternatively, you could switch R3 to 2k2 and C2 to 150n, to get an equivalent effect to reducing the pot value.
Top

Wow - thanks! I would never have known to try those things. I will now and let you know how it works out.
Top

Well it turned out easier to replace pots today and I had a C50K and a B250K so swapped the Gain from B500K to B250K and the Tone to C50K (as you suggested) and it worked perfectly. I may still experiment with the board changes next time i build one, which I most likely will. I may also try installing a Timmy-style bass pot. I like having control over the low end - I don't know why it isn't included on more ODs.

So thanks for the suggestions and thanks to Miro for the trace. I really like this one with my Les Paul.
Top

Thanks Bool! I may try that.

In the meantime as I was looking at this quite simple circuit it made me think I could add a Timmy-ish bass control to it. So I did. And I REALLY like the result! I think I like it better than the stock Push. While I don't think I have done a masterful job at all it's good enough for me to use. I'm sure somebody who actually knows what they are doing would have come up with something clever, but this circuit has achieved everything I wanted to achieve - make a pedal like a Push but with a little more low end on tap if I wanted. I am finding that if I put Bass at around noon it sounds much like a stock Push. I like it at around 2.00 - a little more low end oomph. One thing I wasn't expecting was a little more sparkle - maybe it's because I am effectively slightly reducing the mids? Increasing the Bass further past 2.00 increases the grind too.

As I say I don't really know, but i really like this overdrive. With a 335 I can almost play clean and get a nice dirty bite by digging in a little harder. Great dynamics. If anyone wants to try a Push with a little more adjustability around the low end, try this (With thanks to Miro for his original layout!): 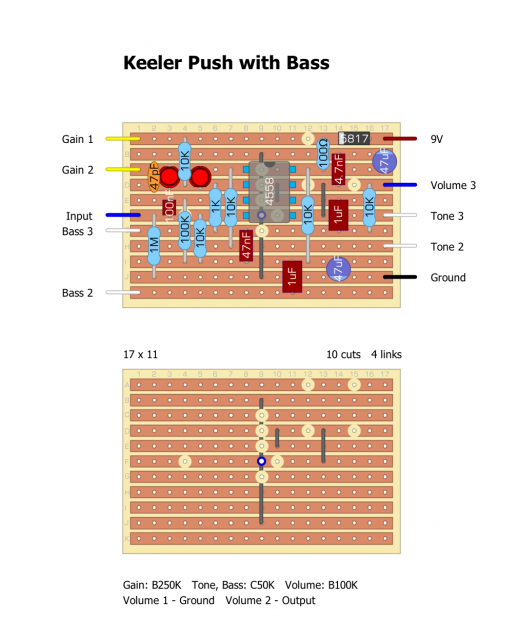 Alternatively, you could switch R3 to 2k2 and C2 to 150n, to get an equivalent effect to reducing the pot value.

I finally got time to fix mine, it's working fine now!

However, indeed, tone is almost always at 3 o'clock.
MoonWatcher, I might try the mods you're talking about, but I'd like to understand what I'm doing for a change.

Lowering this resistance (R7) will raise the frequency of the low-pass filter, is that right? Would lowering the value of C4 achieve the same result?

Regarding gain, I'd like to lower it as well, like HamishR mentionned, it's a bit much.
This, I don't really understand, can you walk me through the gain structure? (Or point to a ressource I could read on it?)
(Sorry if this has been covered many times.)

Found this => http://www.generalguitargadgets.com/how ... istortion/ and especially this part :
A non-inverting preamp is a circuit where the input is connected to the non-inverting (+) input of the opamp and feedback loop is between the inverted input (-) and the output.

I assume this is what this gain stage is, so I understand why raising R3 to 2k2 would induce less gain, I might try to bump it to 4.7k to lower it even more. (Should I raise R4 then?)
However, I'm still confused regarding C2, why did you lower it? (Or was it related to the tone issue?)
Top

So, I've read a bit about overdrive circuits and here's what I came up with:

The duo C2/R3 act as a high pass filter (or low shelf), so you can't change one without adjusting the other.
MoonWatcher advised a 2k/150n pair, this would raise the cut-off from 480hz to 530hz. (A little bit less low-end, so more perceived mids but not very hearable.)
I didn't mind something a bit more transparent, so I used a 2.4k/200n pair, which lowered the cut-off frequency from 480hz to 330hz. (A little more low-end, so a little less mids.)
It actually works pretty good.

R4 controls the minimum amount of gain, so I lowered it to 2.4k as well, to match R3.
Gain now starts at around 1/1, so a lot less then 10/1 initially, or 5/1 after the first modification.
The gain pot is now pretty low gain on the first half, but will still be fairly high gain on the other half.

To be noted, the trio C3/R4/Gain pot act as a low pass filter (or high shelf) so modifying R4 changed a bit the frequency, but as it's mostly controlled by the gain pot value, it didn't change anything that I can really hear.
I assume this is to tame a bit of high frequencies on high gain settings.

The trio C4/R7/Tone pot act as another low pass filter (or high shelf), per MoonWatcher recommendation, I lowered R7 to 2k, but I think it's the wrong approach as it doesn't really change the course of the tone pot.
It added a lot of high end when the pot is maxed-out, but it's quickly overridden by the tone pot value.
I'll try to replace C4 with a 3n3 cap and R7 with a 5.1k instead.
This will tame the tone control a bit more.

Feel free to add to the conversation if I missed something or if I made a wrong assumption.