First have a look at this gut shot of a late Red Llama , then open the guts of this Purple Platypus in a new window

Extra transistor and a couple of resistors, you can read the values on the Llama. Auto-recycling circuits. Never change a winning team, even if they found out the secret. Smart and legit. 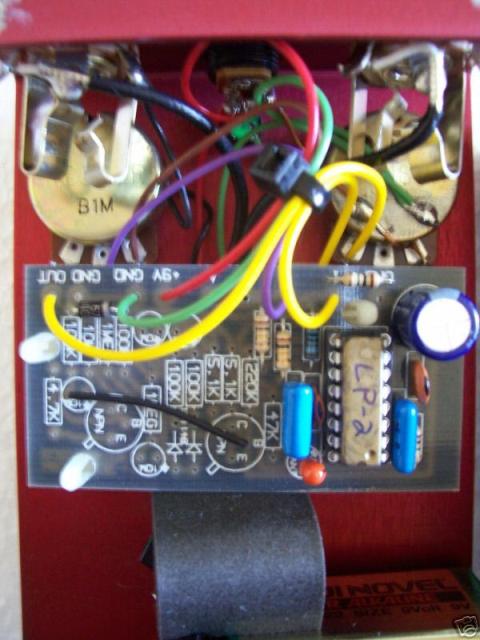 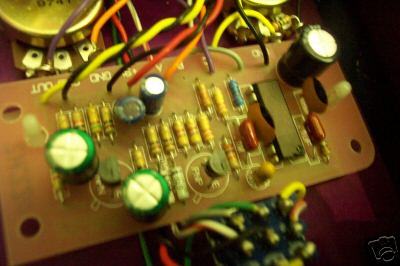 Nice!
Join together with the "Banned"!
Top

I was going to start a topic about this, but since the OP had pictures posted, I figured I would just resurrect his thread. I remember hearing speculation that the Purple Platypus was just a Red Llama with a Dan Armstrong Green Ringer in series after it. I don't know anything about the Green Ringer's circuit though. Does this look true to you guys? If so I was thinking I could just buy a GGG Red Llama and a GGG Green Ringer, put them in the same enclosure, and make it foot switchable to add the Green Ringer to the circuit so it would be like I had a Red Llama and Purple Platypus in one box.
Top

the parts count looks like it's missing a transistor. I think he just dropped the input stage or the output stage on the green ringer. i would guess the input stage, because of how the layout looks, and as the gain was already there from the lama. it wouldn't be a hard mod, you could do it with the ggg boards. putting the two circuits together the way they are might just work fine, though. I would just try that first, and if it doesn't sound right, just go into the GR before the pnp transistor.
"You've converted me to Cubic thinking. Where do I sign up for the newsletter? I need to learn more about how I can break free from ONEism Death Math." - Soulsonic

I remember always meaning to look more into this one and seeing the post about it pop up in the Workbench the other week re-sparked my interest. So I set out for google with my BIG cup of morning coffee and found and an under board shot of the Red Llama. As speculated the board was definitely made for the Platypus but is also used for the Red Llama. Under the board you can see it's labeled as PP-1A. So I traced it out and with the help of a fellow forum member with gut shots of his Llama, I was able to come up with a schematic. The octave section isn't a Green Ringer, it was taken from the FOXX Tone Machine!

There a few changes to the Llama circuit. There's one thing I couldn't figure out. I don't have any experience with the CD4049 so hopefully someone can chime in and make sense of it. On the board, the 47K resistor (27K in the schematic) traces out to the pad for wire B on the PCB. There's no wire connected from the top view so I'm sure there must be some kind of connection under the board as I don't think an extra resistor would be soldered in only to go nowhere. There's a note in the schematic so any feedback would be helpful. Otherwise everything else should be verified. I was e-mailing with another forum member and he tried it out with his pre-built Llama and said it sounded pretty good. A few values vary slightly from the silk screen. The gut shots at DIYSB from be from one of the first units as the silk screen varies are different. Some good gut shots just popped on Ebay the other day and they all matched what I previously drew (I wish I would of had those before drawing the first Schematic from the old low quality gut shots!). The diodes are silkscreened to be 1n4148's but in the few gut shots I've seen of the PP they appear to be Germanium. 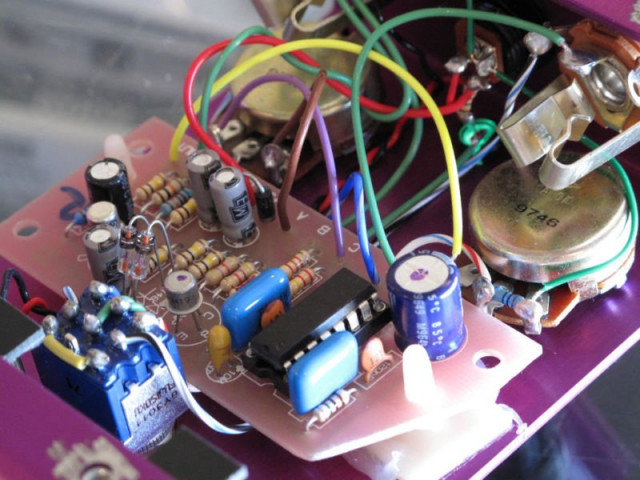 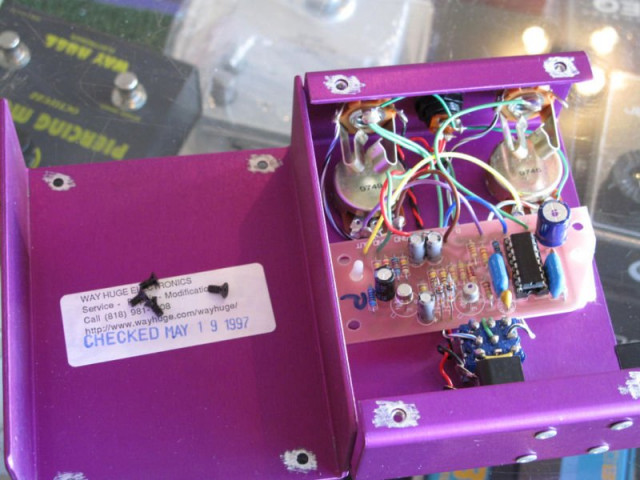 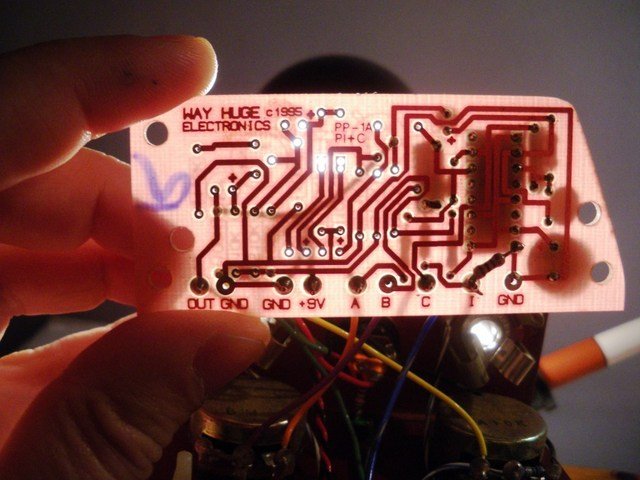 Thanks again for all your help, phibes! Here is a quick sound clip I did of the pedal. I made mine to be a Red Llama with a footswitchable octave, so a lot of the stuff in the clip is just straight Red Llama, but it's pretty obvious when the octave kicks on and it's the Purple Platypus circuit.

Re-uploading the schematic due to spelling words. I can't believe I spelled Silicon wrong!

Yeah, those diodes and transistors are definitely different from the ones I used in my build. Are those 1n34a diodes? Also, what sort of transistors would those be. I'm not very good at IDing transistors.
Top

Yeah I was surprised by the diodes, they definitely look Germanium as opposed to the labeling on the silkscreen. 1N34A should work a-ok as long as you use them in both spots. I tried making out the transistor makes from the markings but couldn't come up with anything either. I'm guessing there both just NPN Silicon.
GuitarlCarl - "TGP = The Gear Polishers"

The octave section is mostly the Foxx Tone Machine, right? 1n34a works perfectly for that.

The same unit appears to be for sale on eBay through futchamusic. At least the same two pics are used in the listing that phibes posted, along with the one I just put up.
Top

Yeah, the photos I posted are from the same auction. I e-mailed and asked for more photos

and then they put up the one you posted.

Nobody has any ideas on where the 27K resistor might go to?
GuitarlCarl - "TGP = The Gear Polishers"

You could use a continuity checker to see what parts connect to it. It looks like in that shot of the half empty board with the light behind it there are some multi-level traces.
Top

The octave section is mostly the Foxx Tone Machine, right? 1n34a works perfectly for that.

The same unit appears to be for sale on eBay through futchamusic. At least the same two pics are used in the listing that phibes posted, along with the one I just put up.

I breadboarded it up today with 1n34a diodes instead of the 4148's that I had in there previously. The sound with the 1n34a's is a lot more subtle than it was with the 4148. The best way I could describe it is that the 1n34a diodes made it sound like the Foxx Tone Machine whereas the 4148's made it sound more like a Fender Blender. Both of them produce a cool effect though, but the 1n60 diodes are probably what was used, and the 1n34a's seem to work fairly well.
Top

I'm curious as to how LEDs might effect it instead of the other two. Do you have that part socketed?
Top

madbean wrote:I'm curious as to how LEDs might effect it instead of the other two. Do you have that part socketed?

I still have the octave part of the circuit on my breadboard. Tomorrow I could put some LEDs in place of the other diodes. Have a preference on what color LEDs?
Top

I tried out some 5mm red LEDs in place of the 1n34a's a few minutes ago. The octave effect was more pronounced with the 1n34a diodes than it was with the red LEDs, but the LEDs sounded a bit punchier, and a bit brighter, whereas the 1n34a's seemed a little bit dark to me.

To summarize in a few words:

Again, that's just my opinion. Someone else could here these things completely different from me, but that was my take on the three sets. If anyone else wants me to try swapping some parts out, this stuff will stay on my breadboard for another hour or two, but then I'm starting a new project.

Thanks a bunch. It was the red diffused I was curious about. I think I might try this out on my Foxx Tone Machine clone that I have yet to box up. Maybe switch b/w germs and LED. Or mismatch the two.

madbean wrote:Thanks a bunch. It was the red diffused I was curious about. I think I might try this out on my Foxx Tone Machine clone that I have yet to box up. Maybe switch b/w germs and LED. Or mismatch the two.

The reds were diffused. Glad I guessed right! Haha. I'm still pretty new to the inner workings of this stuff though, so I just want to double check something. You are allowed to mismatch diodes like that? Is there any way that could hurt the circuit (or the diode)?
Top

You won't hurt anything. The results should be interesting.
GuitarlCarl - "TGP = The Gear Polishers"