this is my first Thread here at FSB. I read a lot here full of enthusiasm, awesome page. I already built the Klon Centaur Clone, cool pedal. But I was always looking for a Vox style pedal, which gives you that nice shiny and gritty overdrive sound full of bells and rudeness.

Now I found a clip on youtube of the "HipKitty Oxblood Distortion" and I think this is something like I'm looking for.

I'm out of Germany and so I don't have the abillity to buy this pedal, so I'd like to ask you, if you have any idea how the schematic could look like or if there is an already finished schematic for voxy tone out there?

The sound should be more ruff and rude than my Blackstone Appliances MOSFet Drive, which is my main pedal at the moment. The Box of Rock was way too smooth.

Did you read the thread about AC30 Simulator?
http://www.freestompboxes.org/viewtopic.php?f=7&t=4131
Top

Yes I did, but I thought that this thng is way too much for my needs. I think that there could be an easier way to get a overdrive pedal with that sound than the way of such a big and complex preamp.

And I forgot something...the Carl Martin AC Tone is familiar to me, and I don't like it at all...it to untypical AC sounding.

I bought one not long ago and it sounds better in person than the video I saw floating around. The paperwork with it indicates it's supposed to be an AC15 with extra distortion. I guess so, it's more like an AC30 at full speed distortion. At least that's how it sounds to me.
Top

there is also the Wampler Cranked AC that you could try.
"You've converted me to Cubic thinking. Where do I sign up for the newsletter? I need to learn more about how I can break free from ONEism Death Math." - Soulsonic

ibo:
is it possible to see a schematic?
Thanks

Thanks for the corrections.

Vero layout for anyone wanting to give it a try: 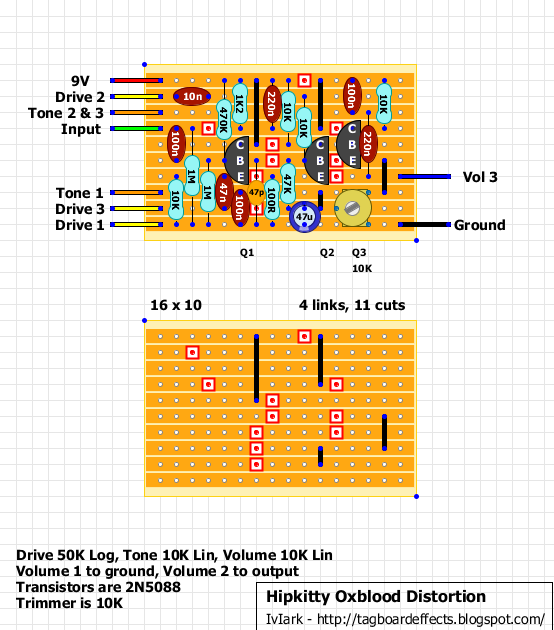 That was as per the scheme but if you want to include a PS filter cap then use this one: 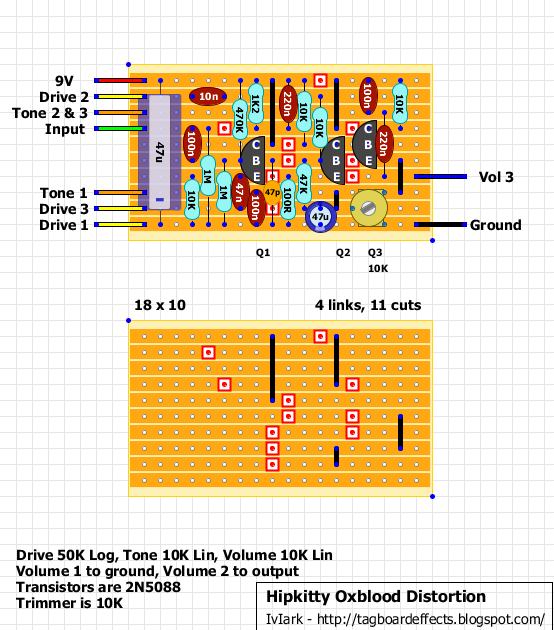 I've got axial caps that size, but if you just want to use a radial cap you could probably reduce the layout by a column.
"If anyone is a 'genius' for putting jacks in such a pedal in the only spot where they could physically fit, then I assume I too am a genius for correctly inserting my legs into my pants this morning." - candletears7 - TGP
Top

pinkjimiphoton
Transistor Tuner
Posts: 1161
Joined: 12 Sep 2010, 20:03
my favorite amplifier: my own, a redesigned princeton
Completed builds: so fucking many goddamn pedals it would make your ass hurt just looking at 'em all!!!!!
there's videos that totally suck of about 90 of 'em here:
http://youtube.com/666pinkster
gimme a like: http://facebook.com/pinkjimiphotonrocks 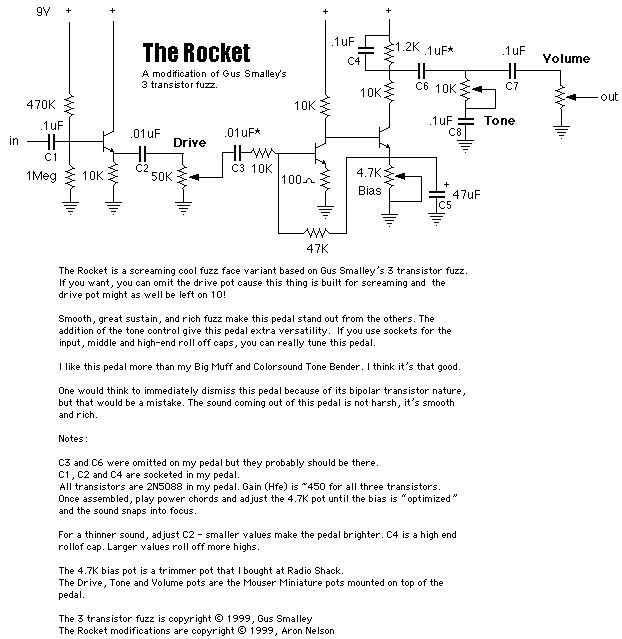 just sayin', yo....
"When the power of love overcomes the love of power the world will know peace."
Top

yeah, pretty much the same.
Top

I don't know about the Hip-Kitty, which looks very similar, but I've just built the Gus Smalley Rocket, as modified by Aron Nelson (see the schematic posted under this topic heading by PinkJimiPhoton) - and it is SUPERB ! Aron says he prefers it to his Big Muff and Colorsound Tone Bender.

It sustains for days and doesn't get all farty. But the best thing is, it still lets the guitar tone come through. I'm using a PRS McCarty with rosewood neck(fabulous), Bare Knuckle Abraxas pickups (phenomenal) and a coil spilt switch - and all the variations are distinct, whereas other fuzz circuits I've tried (so far - and there are plenty that I haven't tried yet) tend to lose those subtleties.

One of the best things on this guitar is the ToneStyler (by StellarTone) 16-way smooth-switching tone switch (not a standard item - I had to import it from the U.S. - but EVERY guitar should have one of these babies. If you don't know about them, check them out on the Web thingy. They ain't cheap, but they are worth every penny/cent.

By inference, as this topic's about the Hip Kitty Oxblood, that should sound pretty amazing too.
”Sex is great - but you can’t beat the real thing !” - The Wanker’s Handbook
Top

Anyone else had experience (good or bad) with the Kitty litter or the Rocket ?
”Sex is great - but you can’t beat the real thing !” - The Wanker’s Handbook
Top
Post Reply
19 posts • Page 1 of 1