JHS wrote:The 3rd trannie is for the noiseless LED switching (not shown on the schem).

That's what I presumed. I got to have a glance inside one a while ago and that what it looked like

I got a stupid idea or won't it? I am planning an OuCeDee pedal using rotary switch to carry out (almost) completely all v1,v2 v3 versions - just for curiosity. By using 4P3T switch and modified dual ganged pots (according to The Secret Life of Pots article) Tone pot 10k B/25k A, Volume 100k/500k B and drive 500k/1M A and tone cap .1/.047. First two poles of rotary goes to drive 2,3 pins and to output (volume 2 pin and the last pole should gather circuit switch to volume 3, tone cap and tone pot 3 where grounding is common. Doubts?
Top

bajaman wrote:OK - thanks for that - TL082 more transparent - anyone else noticed this

I just built this thing from MarkM's excellent layout. I socketed an LM353N, TL072, and TL082CP (couldn't find a TL082CD in a DIP.) The LM353 sounded way too bright and harsh. At first, I thought that I had screwed up somewhere. The TL072 was an improvement, but it still had a harsh treble and lacked the supposed "transparency" of the original circuit.

Now, the TL082 was a noticeable improvement. Not a drastic change, but definitely a change for the better. My 72 was unmarked, and my 82 was from TI. I'm not sure if that's part of the difference. But the 82 caused the clipping to smooth out a bit and the overall tone become warmer/darker (in a good way.) I have no idea why the 72 and 82 ICs sound different. According to TI's spec sheet, they're identical(?). Regardless, swapping the 82 in did give the pedal its advertised transparency. I was surprised at how well this worked with my Vox AC15cc1.

Overall, I like the pedal. It's nothing magical, but it is quite good for rhythm work. Obviously it sounds best running into some tube overdrive. Played into a clean amp, it's really nothing special.

And as best as I can tell, the HP/LP switch works as mentioned previously: HP simply cuts bass. LP sounds better to me, but HP would likely be useful with something like a semi-hollowbody at moderate gain.

So if anyone builds this, make sure to try a TL082. Just don't ask me why it makes a difference.
Top

i'm suspicious about the value of the resistor to ground in the feedback of loop of the first op amp in the schems that i have seen for the OCD. 2.2K is like the value you would see in a tubescreamer. and in this setup, with a 500K pot between the output and the inverting input, you are basically sending the first op-amp rail-to-rail. there'd be no point in having clippers of any sort after such a first stage. so it ends up operating like a DOD Overdrive 250.

based on simulations with a generic MOSFET model, not specifically the 2n7000, i get 22K as a plausible value. or am i making a mistake? i haven't seen anyone comment on this so i finally decided to post.

I think doug posted a while back about rducing the gain in each stage by 50% to reduce railing. It has been noted that the OCD does sound a bit crappy after 10 O clock on the gain pot.

I don't know how the original sounds, but I've built one from Mark's layout, and with the gain knob past the 12 hour position -> it sounds not too good. I use a guitar with humbuckers, if I split them, and lower the volume a bit then it's a quite good overdrive sound.
Top

thanks for the confirmation. i apologize for missing doug's comments. i will go back and read again.
Top

RiGLEY wrote:I don't know how the original sounds, but I've built one from Mark's layout, and with the gain knob past the 12 hour position -> it sounds not too good. I use a guitar with humbuckers, if I split them, and lower the volume a bit then it's a quite good overdrive sound.

I agree, any higher than 12 0'clock on the gain and the pedal sounds very flat and lifeless. The way to get a good high gain sound from the circuit is to keep its gain down and then boost it with another pedal on its input, it sounds terrific like that. I use mine with all the knobs around 12 o'clock, the gain is a little less. It has a nice crunch rhythm and low gain lead tone. I then boost its input with a Boss SD-1 with the Monte Allums mod, and it has gain for days. Try it out, it's great.
Top

I did something similar. I took out the battery clip, and installed a EH LPB-1 type booster modded for less bass response and stuck the knob out the side. It is all I use for high gain. Most high gain distortion pedals really clamp your signal and often disappear in a band context, but I've had great luck with this mod. I did it to a OCDv1. The v3 I had sounded much middier and the tone control was too dark. It was better for lower gain classic rock tones.
Top

So given that the 2.2k resistor is correct, I can understand why better why the tone control is a low pass filter in all settings. The op-amp clipping is quite sharp and puts a lot of high frequency content into the signal. The MOSFET clippers remove some of that. But a lot more is taken out by the final tone stack. By the time you get to the output, the corners are pretty nicely worn off.

And I suppose there is lots of compression in this pedal. Once the you hit the rails with the op amp (and you will do that with the gain knob at 20%), you've got 4.5V getting trimmed to .6V. You will keep getting your .6V for a long time until that 4.5V falls down to .6V.

It's interesting that such a heavy op-amp clipper should turn out to be so successful.
Top

The mosfets arn't hard clippers in your typical manner.

FYI there is apparently an OCD V.4 which includes a couple mods found on the gear page for reducing bass AND a germanium diode attached to one of the mosfet clippers. Apparently Fulltone keeps up with user community tweaks and critiques. Here's a gut shot 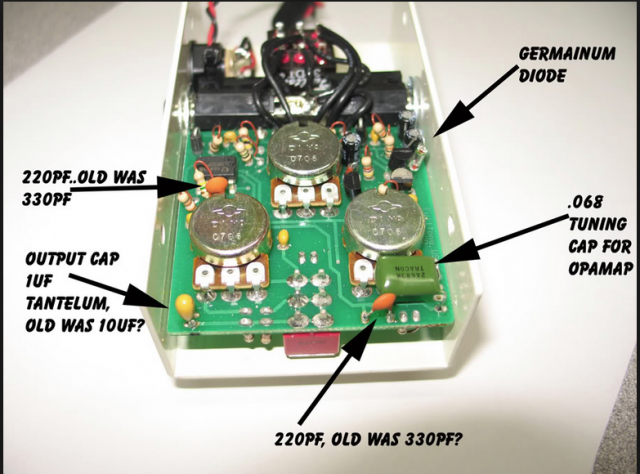 Nice pic. I've been using that clipping config inan overdrive I've been playing with. I started off using just two mosfets as diodes then I went to using the germanium diode as a blocking diode for the positive clipping diode > asymetric clipping...

no, my point is that the op-amp that precedes those diodes is clipping hard.
Top

is it a fulltone's prototype or a modded pedal?
Top

Is the OVD in Mark's layouts the OCD?
Top

Yeah. I've built it and it works. I just recently got a couple of TL082's which I have yet to try in it.
Top

According to a couple folks over at TGP there is a new 4th revision of the OCD. Fulltone has not mentioned it on his website and my guess is that he doesn't want to do upgrades of older pedals as he had done in the past.

The Pic is the gut shot of an actual production model OCD taken by the TGP'er who owns it. I am not the owner of the pedal I just linked to his pic.

Here's another gut pic of another OCD where you can clearly see. REV. 4 wriiten in sharpie. It looks like these went to market in summer 07.