bajaman wrote:i built my Peach fuzz without the relay - I have lots of those 3PDT blue footswitches - no clicks or pops either and still true bypass

can you explain how you did this? i have all the parts on hand except the relay, and i'd like get this built. thanks!
"You've converted me to Cubic thinking. Where do I sign up for the newsletter? I need to learn more about how I can break free from ONEism Death Math." - Soulsonic

great. thanks alot man!
why source out a single pole and a relay when you can do it this way right?
"You've converted me to Cubic thinking. Where do I sign up for the newsletter? I need to learn more about how I can break free from ONEism Death Math." - Soulsonic

It seems that the last, most recent schematic for the Peach Fuzz has gone missing (the link is no good anymore).

Does anyone have a final schematic for posting? Or can someone email it to me so I can post it?

hmmm does anyone who has this schematic post it up or simply send it to me in a pm? not sure why the images are gone...
Top

Guys, what do you think about idea to replace original tone control and build Peach Fuzz with Timmy Bass/Treble control? I had Peach Fuzz and liked it, but sometimes low end was too big and woofy.
Top

I used Snail's layout and I'm getting a little bit of motorboating with mine. It is in the same case as a SHO, and only happens intermittently when both effects are engaged. I tried moving all the wires and boards around but nothing gets rid of it. I put a 220uf across the power supply, as well as a 47ohm resistor in series with the 9v to each effect and it tamed it down, but didn't kill it.

Anyone else have this problem and figure out how to fix it?
Top

I just verified a stripboard layout over at this other thread on fsb about the peach fuzz, bajaman's mini peach fuzz thread:

it took me ages to stumble across that thread so I thought i would post a link here, too, as well.

interesting fuzzstortion... kind of sounds like a metal zone or metal muff or something... real crisp and dry sounding, not all phat and juicy and whatnot. Someone made a T Rex (The Slider) comparison and I think that's a good one. I like the "voice" of this circuit, it's got a muffy low end and a certain vocal quality that I always search for and am happy to find in a fuzz distortion or overdrive...it's unique. Don't know if this will be a go-to for me but I'm glad I built it. The Sonic Titan is another really great LM386 distortion device. I also really like the Penny Pedals Fingerprint a whole lot another based on a similar chip.
Top

I recently built this one for a friend. Sounds pretty good.
Including the HF-stabilizing components from the data sheet resulted in considerably less hiss while I had the circuit on my breadboard, so I included them in the schematic as well

Hmm. The unused opamp channel could be used as inverting recovery after the tone stack. It would not need much gain, if any.
http://tagboardeffects.blogspot.com/
http://mirosol.kapsi.fi/
"No such thing as innocence" -Iron Chic
Top

mirosol wrote:Hmm. The unused opamp channel could be used as inverting recovery after the tone stack. It would not need much gain, if any.

The output signal is being clipped by the LM386 and is rather close to the supply rails.
If the spare op-amp should be used as an output amp without adding more distortion, it should sit after the volume control. Recovery gain shouldn't be necessary here

I have a stack of spare boards left after building the two i needed.
If anyone's interested, I'll sell them for $4 per board plus postage. PM me for details 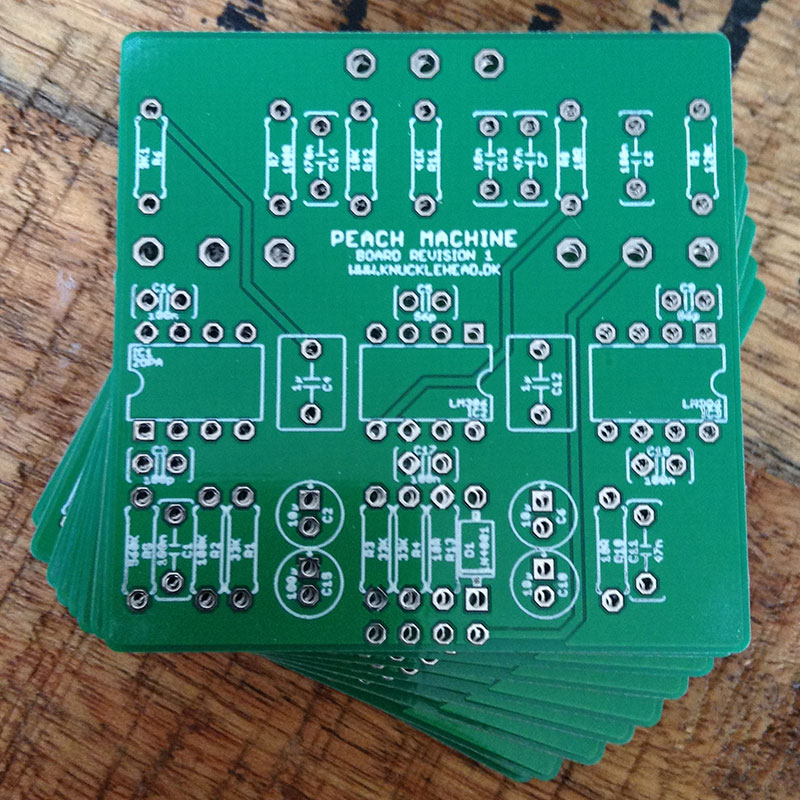 Concerning the noise, build the first stage as a non-inverting amplifier. The way it's in the original is rather subpar. Make Rf 15kΩ, Rg 910Ω, should give an improvement of over 20dB while keeping the gain the same. The TL022 isn't a particularly great choice either, but maybe it's part of the sound...
Top

bajaman wrote:IMPORTANT UPDATE
The first dual opamp is NOT a TL022, it is definately a TLC (rail to rail opamp) NOT TLO, from the photos posted earlier in this thread. My guess is it is a TLC2262 device.
ALSO
There are 3 different types of LM386N power opamps: The LM386N-1, which is the one used in the Peach fuzz is a 6 volt device. The others are LM386N-3 whch is a 9 volt device and the LM386N-4 which is a 16 volt device.
Cheers
bajaman

Sorry to resurrect an old thread, but I just wanted to comment that your guess is correct !!

I bought a Peach Fuzz reissue, took a few pictures and traced the board completely. 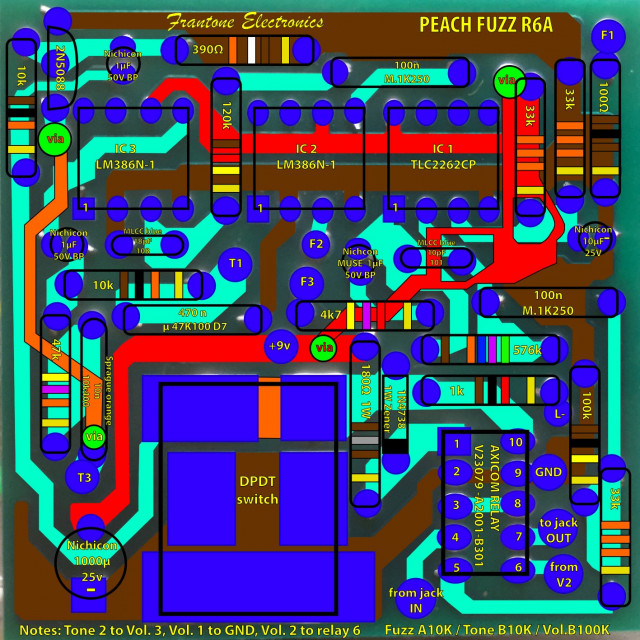 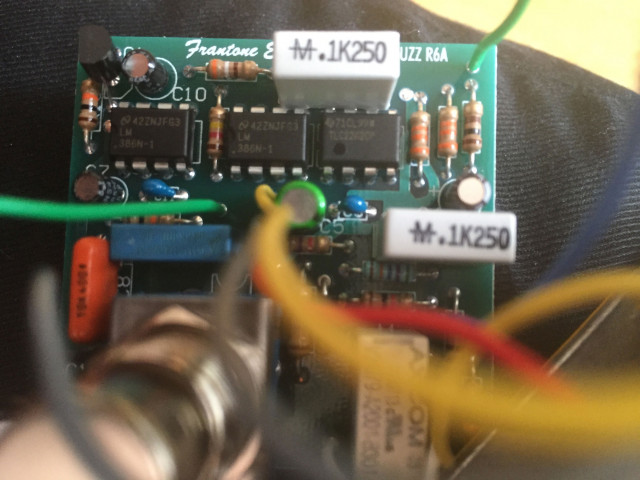